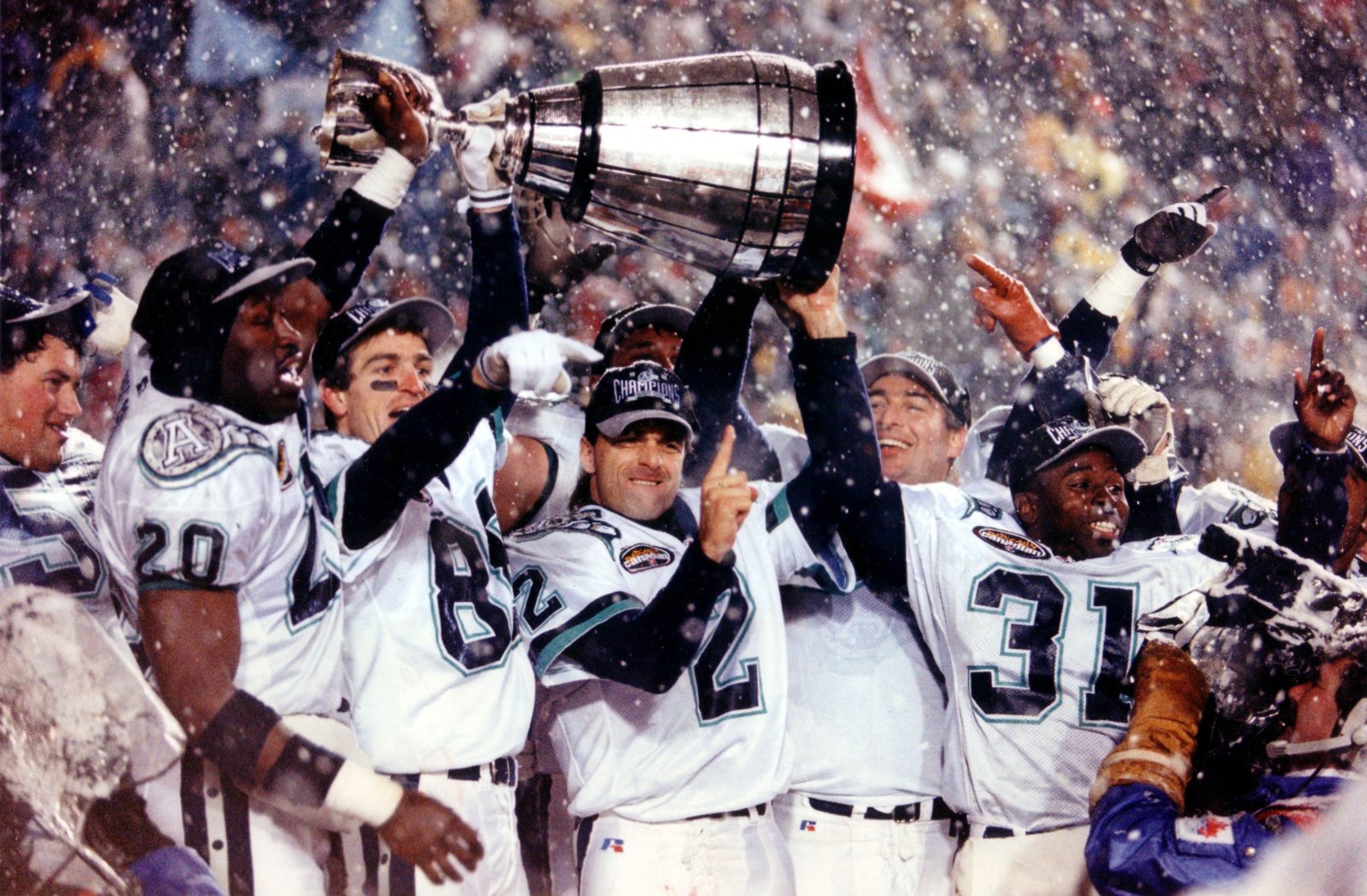 There’s been a lot of chatter about Argonaut.ca’s Argo Grey Cup Showdown, and for good reason. There have been so many great games it’s hard to choose one over the other. We asked our resident historian Mike Hogan to give us his personal Final Four and eventual champion.

When I first found out about the Grey Cup Showdown back in September, it didn’t take long for me to get pumped up about it. When I was asked to write about my bracket, I cringed a little.

This was tough. Really tough.

I’m sure that for many this is like trying to rank one of your kids over the others. As a stepfather of four I can say with confidence that the Grey Cup bracket is much more difficult because I ranked the kids years ago (sorry Russell).

The 2012 team advanced to my Final Four with a narrow victory over the 1950 team. While the famous “Mud Bowl” was played before my time, there’s an obvious romanticism about a game where a player almost drowned, or so the legend goes. Hearing a firsthand account of that iconic slopfest from Nick Volpe, the Argos placekicker that day, while he was holding an autographed game ball from the victory is something that personified the game even more. Still, it was just not enough to beat a game I saw and that holds a special personal connection. 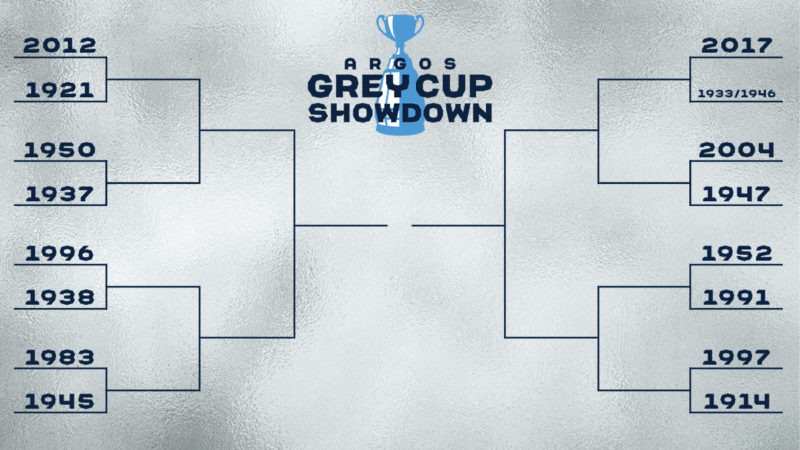 That team faced the 1996 team, who survived a totally unfair opponent in the 1983 champs. The ’82 and ’83 Grey Cup games were the first I remember vividly, as I was just a kid for the ’71 game. I was in college while watching Condredge Holloway and Terry Greer resurrect a franchise that inflicted too many losses on its fan base during the 70s and first two years of the 80s.

It would culminate with the franchise’s first Grey Cup win in 31 years with a heart-stopping win over B.C., capped by a late game-winning TD pass to Cedric Minter from Joe Barnes, who came off the bench to replace a flu-ridden Holloway.

That team holds a special place in my heart and would have made the Final Four without question against another opponent, but the 1996 game and team were special.

The third team to reach the semi-finals was the 2017 group. No disrespect to the ’04 champs, but there were only two similarities between those championship games; the Argos won both, and both games were in Ottawa. This was the easiest of the four decisions for me.

The ’97 team may be the best Argo team ever. Take the ’96 champs and add Mookie Mitchell to the mix? Holy schnikies. The finale wasn’t exciting though, as the Argos trounced the Roughriders.

The ’97 Boatmen may have been the better team, but for pure drama it was hard to beat the ’91 team on several levels. The Rocketmen get the nod here.

The team that won the 100th Grey Cup had a lot going for it. There was a real energy around that team all season with the additions of Ricky Ray and Scott Milanovich, the win in Montreal in the East Final – one of my favourite games in Argo history – and the year-long hoopla leading up to a spectacular week of events highlighted by the game itself.

Remembering the bracket is done on a favourite game basis, the personal connection here is strong; it’s the only Grey Cup game which I had the privilege to call the play-by-play. I’d worked other games in a different capacity, but this one remains special.

Even though I wasn’t working for the Argos at the time, being invited to the post-game party with my wife and one of my stepsons (sorry Russell) is something that will always stand out.

Amazingly, it still wasn’t enough. The 1996 team advanced, and it honestly wasn’t that tough a decision.

Now it was left to see who would meet Flutie and company in the final; the team that won in a blizzard, or the team that nearly froze en route to victory.

The 1991 season was like no other in CFL history. Bruce McNall, Wayne Gretzky and the legendary John Candy brought sizzle to Toronto. The Argos could have used some of that to try to stay warm for the championship game in Winnipeg, featuring a kickoff temperature of -16C.

Matt Dunigan played with a broken collarbone on his throwing shoulder. “Rocket” Ismail returned a kickoff for a touchdown, dodging beer cans on his way to the end zone. Ed Berry opened the scoring with a 50-yard pick six. Every time the Stampeders tried to make a game of it, the Argos found a way to keep them at bay, with the Ismail TD being the most dramatic example.

It was a dream season, capped off with a win for the ages, but it still wasn’t enough. The 2017 team advanced.

That set up a final that likely would have been played in a snow globe – the 1996 Grey Cup versus the 2017 Grey Cup.

The 2017 game was memorable for all the right reasons. I was working as the Argos sideline reporter for the national TSN Radio broadcast, so I had the best spot in the building from which to watch the game, standing on the sideline at midfield, just beside the Argo bench.

The DeVier Posey 100-yard TD and the Matt Black end-zone interception will go down as two of the biggest plays in Argo history, but remarkably neither was the most memorable play of that cold, snowy night.

With the Stamps up by eight points and only needing a single to make it a two-score game late in the fourth quarter, Cassius Vaughn recovered a fumble and returned it for a 109-yard touchdown. It’s next to impossible to convey what the Argo bench was like, going from the inevitability of a Stampeder score and probable Toronto loss, to the elation of the Vaughn return and Declan Cross’ two-point conversion to tie things up.

This game had so many memorable plays that nobody ever mentions that Lirim Hajrullahu kicked a last-minute field goal to win the Grey Cup.

Still, with all those remarkable plays, it wasn’t enough.

Doug Flutie came to Toronto in 1996 and it changed everything. He orchestrated an offence that was just flat out fun to watch. There were games where they scored at will. They could run the ball, throw with anyone, play astonishingly good defence, and dominate on special teams.

They were exceptionally well coached and coasted to a 15-3 record and a 43-7 blowout win over Montreal in the East Final.

Then there was the Grey Cup.

The snow started sometime in the afternoon in Hamilton, then built to a major downfall by kickoff time. Edmonton was a good team, but the Argos were still a relatively comfortable favourite. There was just one mystery that needed to be resolved; could Flutie play well in the snow?

That question followed the quarterback to Toronto from Calgary, but on this day, despite a non-fumble late in the game (that’s the story Argo fans are sticking to), he was top notch, passing for over 300 yards while rushing for 98 yards and a touchdown en route to being named the game’s MVP.

Flutie’s performance was exceptional given the circumstances but is almost forgotten because of the vast number of big plays. Jimmy “The Jet” Cunningham returned a punt 80 yards for a touchdown, Adrion Smith iced the game with a 49-yard pick six. Mike Vanderjagt hit all five of his field goal attempts in far from ideal conditions for a kicker.

Those were just the Toronto big plays. For Edmonton, Danny McManus hit Jim Sandusky for a 75-yard touchdown. “Gizmo” Williams returned a kickoff 91 yards for a score.

Then there was the catch.

In the first quarter Eddie Brown sprinted down the left sideline and was ready to haul in a deep pass from McManus, but he couldn’t hold on and the ball slid through his hands toward the ground. Remarkably, and without even breaking stride, he kicked the ball back into his hands and ran into the end zone for a 64-yard major.

How exciting was this game? There were six lead changes in the first half.

The best part of the iconic 43-37 win? Sitting in the stands with friends and watching Flutie, “Pinball” Clemons, Paul Masotti, Don Wilson and Pierre Vercheval raising the Grey Cup over their head – in Hamilton.

Argo fans have been blessed with many Grey Cups wins to choose from, most of them coming in exciting games with teams filled with character and characters.

For me the 1996 game stands alone. It may not have been the easiest process in the world to get there, but I’m extremely comfortable with where I ended up.

Your bracket may be wildly different than mine and that’s awesome. There are no right or wrong ways to fill it out, it’s just a way to open the floodgates of your memory bank and remember how important the Argos and the Grey Cup are to you.

I hope you take the time to go through the process. You’ll learn a few things about teams of yore by watching the videos. More importantly, you’ll bring back some remarkable memories during a week where we all wish we were watching the Argos compete for another Grey Cup – maybe even playing a game more exciting that the one in ’96.