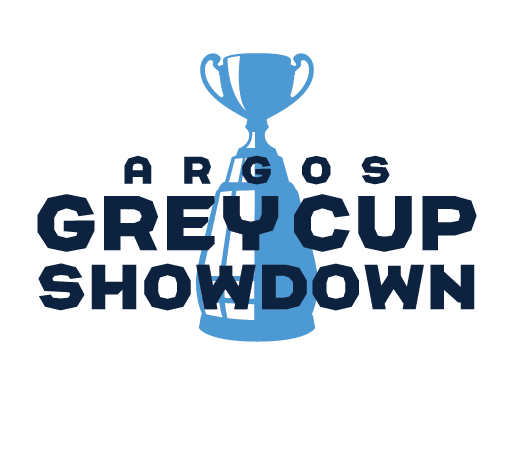 Introducing the Argos Grey Cup Showdown, a chance for Argos fans to decide their favourite Grey Cup of all-time. Each of the 17 Argos Grey Cup Championship games are pitted head to head in a bracket tournament where one winner will be crowned.

Before voting opens be sure to check out our video series below on what makes each Grey Cup victory special. 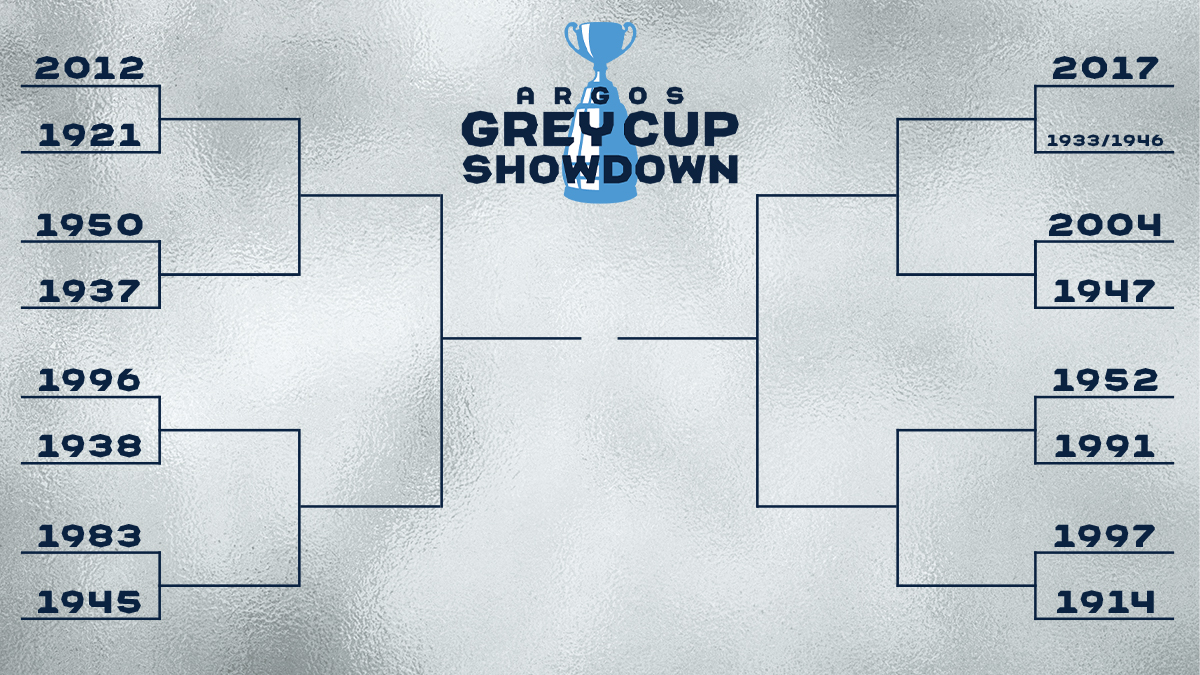 Double Blue vs. Blue and White. It was a subway championship game before there was an actual Toronto subway. The Argos would win the sixth-ever Grey Cup in 1914 at Varsity Stadium with a 14-2 win over the University of Toronto Varsity Blues.
space

For the first time in the nine-year history of the Grey Cup, an eastern team would face a team from the west for the championship. The Argos would host the Edmonton Football Team at Varsity Stadium. The legendary Lionel “Big Train” Conacher led the Argos with 15 points in a 23-0 win.

In 1933 the Argos renewed their long, intense rivalry with Sarnia. Yes, the Sarnia Imperials. The Double Blue headed to Sarnia to face the Imperials. The incredible hype for the game was only matched by the wonderfully entertaining offensive display as the Argos won the game 4-3.

After winning the Grey Cup in 1933 with a 4-3 win over Sarnia, the Argos offence exploded in the 1937 title game, as the Boatmen blew out the Winnipeg Blue Bombers 4-3.
space

A year after beating Winnipeg 4-3 in the Grey Cup final, the two teams staged a rematch in 1938. After trailing the Bombers 7-6 after three quarters. The Argos blew open the game, scoring 24-unanswered points in a 30-7 win.
space

The Second World War was over and the Big Four was back in business. The legendary “Gold Dust Twins”, Joe Krol and Royal Copeland, led the Argos to the 1945 Grey Cup final against Winnipeg. Despite snowy and exceptionally cold conditions, the Argos dominated for a 35-0 win in the first of three straight Grey Cup victories.

The Winnipeg Blue Bombers were getting sick of Royal Copeland and Joe Krol. A year after winning the Grey Cup final 35-0 over the Bombers, the Double Blue went Double Grey in 1946 with a 28-6 win over the ‘Peg.
space
space

The Argos faced the Winnipeg Blue Bombers in the 1947 Grey Cup final at Varsity Stadium, the third consecutive year the two teams would meet for the championship. Winnipeg led 9-0 early, but the home team tied it up. The Joe Krol then tried to punt for a single for the win. His kick sailed out of bounds just inside the end zone and the Argos won 10-9.

In one of the most famous games in Canadian sports history, the Argos met Winnipeg in “The Mud Bowl” at Varsity Stadium in the 1950 Grey Cup final. Argo QB Al Dekdebrun one-yard run was the game’s only TD. Nick Volpe and Joe Krol kicked the other points in a 13-0 win.

In the first-ever televised Grey Cup, the Argos hosted Edmonton in the 1952 championship game at Varsity Stadium. The Argos put the Grey Cup game away in the fourth quarter on a TD pass from Nobby Wirkowski to Zeke O’Connor to make the final 21-11.

The Argos met the BC Lions in 1983 under the Dome in Vancouver in the first indoor Grey Cup game. Quarterback Condredge Holloway had the flu and struggled through the first half. Trailing 17-7 at the break, head coach Bob O’Billovich gave the nod to Joe Barnes, who led the Argos back, hitting Cedric Minter for the final score in a 18-17 win.

The 1991 Argonauts captured Toronto’s imagination. They were filled with Candy and Greatness and Pinball and a super-sonic Rocket. The Argos beat Calgary 36-21 in Winnipeg in the coldest Grey Cup ever played, with a kickoff temperature of minus-16 Celsius.
space

After a miraculous win over Montreal in the East Final the Argos headed to Edmonton for the 1997 Grey Cup final against Saskatchewan. This game was essentially over by the coin flip. After spotting the Riders a 3-0 lead, the Argos dominated the rest of the way, leading 41-9 after three quarters, and coasting to a 47-23 win.

The 2004 Grey Cup at Ottawa’s Frank Clair Stadium may not have been the most exciting game ever. But an uneventful evening was just the way the Argos defence wanted it. The B.C. Lions scored on their opening drive, but after that the Double Blue D dominated in a 27-19 win, despite not recording a sack or a turnover.

For many, the 2012 classic was the pinnacle for CFL football in Toronto. The Argos hosted Calgary in the 100th Grey Cup at a sold-out Rogers Centre. The Argos defence shut down Calgary’s Jon Cornish, while his Double Blue counterpart, Chad Kackert, ran away with the game’s MVP award in a 35-22 win.

It may have been the most Canadian day ever. The 2017 Grey Cup between the Argos and Calgary was played in the national Capital…in Canada’s 150th year…in a blizzard…with Shania Twain arriving for the halftime show via dog sled. Cassius Vaughn returned a fumble 109 yards for a touchdown. Ray had earlier connected with DeVier Posey for a 100-yard TD, and Matt Black clinched the 27-24 win with a last-second interception in the end zone.