Lefko: The case for the ’97 Argos as the best team in franchise history 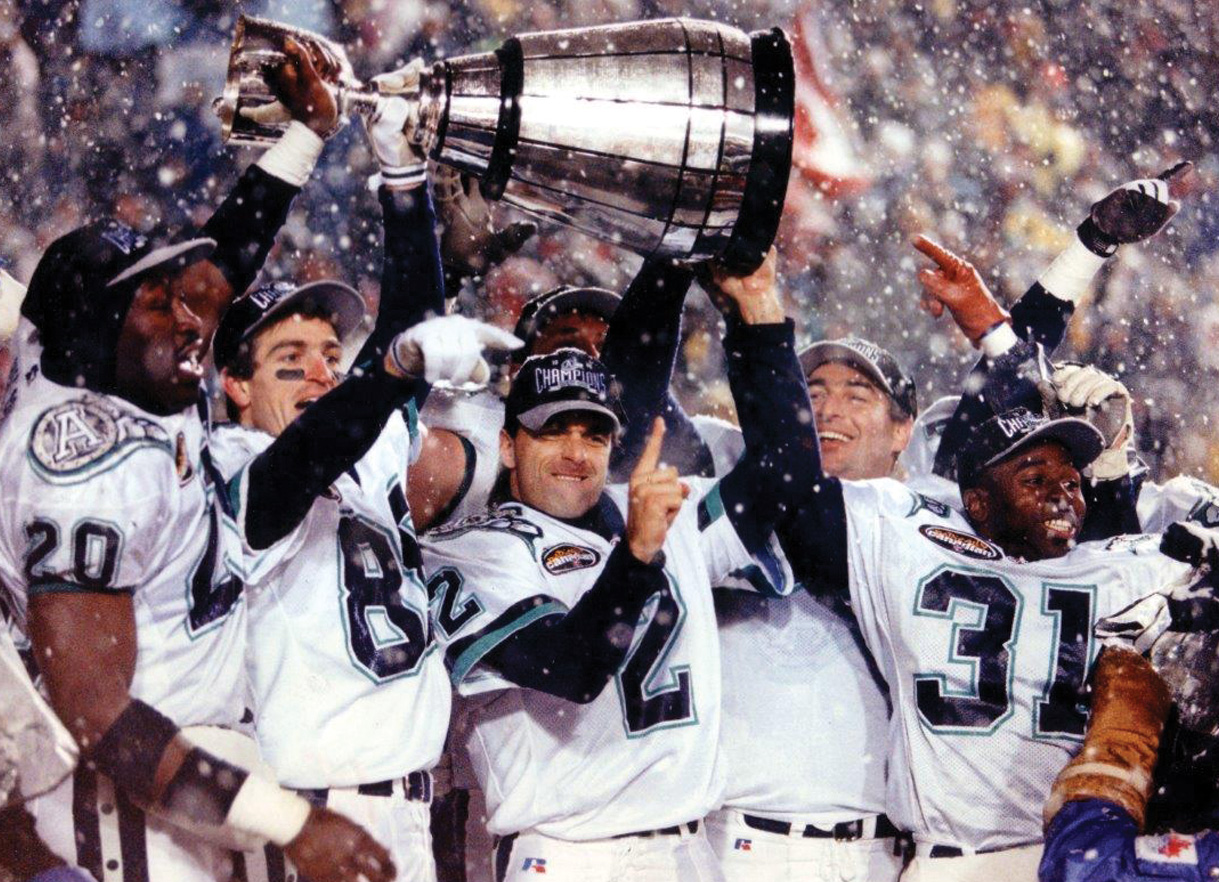 Lefko: The case for the ’97 Argos as the best team in franchise history

Twenty years have passed, but anyone who saw the 1997 Toronto Argonauts will clearly recall the dominance of this particular team.

There are some people who say that the ’97 team was the greatest in franchise history.

Some will even suggest the ’97 team was the greatest in Canadian Football League history, although fans of the Edmonton Eskimos will point to the ’81 team as being the most superior, and a case can be made for the 1995 Baltimore CFLers.

It’s impossible to compare teams from different eras because of so many variables, but there’s no denying the 1997 Argonauts may have been one of the most exciting in CFL history.

Head Coach Don Matthews, who sadly passed away in June at age 77, had a proven history of winning.

He took the Argos to the Cup in ’96 and turned it up a notch in ’97, largely because quarterback Doug Flutie understood his players and what they could do, whereas in ’96 it took some time.

Even with the departure of offensive co-ordinator Adam Rita, the Argos didn’t miss a beat with the tandem of Jim Barker and John Jenkins sharing the co-ordination of the offence (Jenkins preferring to move the ball via the passing route, while Barker more overseeing the run game).

The likes of Flutie, running back Robert Drummond, receivers Mike (Pinball) Clemons, rookie Derrell (Mookie) Mitchell and Paul Masotti, and centre Mike Kiselak were some of the standouts on offence.

Among the most memorable moments was the touchdown pass from Flutie to Clemons late in the final quarter of the 1997 East Division final, a play Pinball described as the defining moment of his career on www.definingmoment.ca.

Clemons said this play, in which he caught a pass downfield and then quickly turned to his left and eluded two Montreal Alouettes’ defenders, was when the “concept of team really came to life.”

And, of course, there was the touchdown on the 95-yard kickoff return by Adrion Smith on the first play of the second half in the Grey Cup that provided a snapshot of the Argos’ creativity.

The Argos trounced the Saskatchewan Roughriders 47-23. There were more than 60,000 people in attendance, and the joke is that only 1,000 were cheering for Toronto.

“I recall the joy of frequent blowouts and there was never a week I didn’t expect them to win,” says longtime Argo supporter Lori Bursey.

“Imagine sitting in Edmonton on Grey Cup Sunday, with no stress by halftime. The ’97 team was that dominant.”

Daniel says two of the essential measures for “granting that exalted status” as the greatest team of all time is the eventual Hall of Famers and, more importantly, the speed of the team’s rise in the standings from the previous year or years.

“The Argos were the only repeat Grey Cup winner from 1983 to 2009, but the thing that sets the ’97 team apart and above the ’96 Argos is that they were able to do it again when everyone had them as a target,” Daniel says. “They won back-to-back Cups in a time when clubs simply could not get that done in the shadow of the ‘80s Edmonton powerhouse.”

Toronto Sun sports columnist Steve Simmons, who grew up in Toronto and has covered 20 Grey Cups, says the ’97 Argos were “clearly” the best in franchise history and might have been the most fun offensive team in CFL history.

“They scored 660 points, were a plus 333 in point differential and at home, they were beyond compare. Look at the Hall of Famers from that lineup: Matthews, Flutie, Pinball Clemons, Mookie Mitchell, Mike O’Shea, Pierre Vercheval, and they had some really good players who were probably borderline Hall of Famers like Paul Masotti, PeeWee Smith, Rob Waldrop and kicker Mike Vanderjagt.

“It all started with Matthews’ kick-butt attitude and Flutie’s many talents. Everything went from there. The Argos had won the Grey Cup the year before. This was the cherry on top.”

Paul Woods, another longtime Argo fan and author of a book about the ’83 Toronto team, thinks the ’97 edition was the greatest in franchise history and ranks up with the ’81 Eskimos and ’95 Baltimore CFLers as the greatest in CFL history.

“I think the ’97 team was the most talented Argo team ever,” Woods says.

“It was the culmination of two years of utter dominance that we’ll probably never see again. Both years they were 15-3 in the regular season and 17-3 overall, but they were a more dominant team in ’97 and won the Grey Cup in convincing fashion, whereas in ’96 it was a tight game, although conversely they won the ’96 East Division in convincing fashion and the ’97 Eastern final was very tight.

Both ’96 and ’97 seasons were back-to-back dominance from start to finish. Having said that, a good case can be made for the ’97 Argos being the strongest team – certainly the strongest Argo team ever and maybe the strongest CFL team ever.”

Phil Kitchen, another CFL historian, says coming off the dramatic snow bowl win of 1996, “the gang was back with the just the right nips and tucks to improve the juggernaut even further. Coach Matthews led an all-star team that dominated the league. The 1997 (edition) was a dominant team with stars across the board. Veteran players from 1996 were moved out including Jimmy Cunningham, Jeff Fairholm, Tim Cofield, Mike Morreale and impact new arrivals included Chad Folk and Derrell Mitchell as well as Jeremy O’Day, Antonious Bonner and Kelly Wiltshire. The contributions of Folk and Mitchell cannot be understated.”

“Mitchell started a legendary CFL career with instant chemistry with Flutie and that was the main reason for Flutie’s touchdown passes climbing from 29 in 1996 to a team record 47. Both Folk and Mitchell would stake their claims as all-time Argos over their careers. It’s not hard to see why the team was so great when you consider the number of superstars they had.”

Journalist Howard Berger, another longtime Argo fan and historian, says beyond everything else the Argos did in ’97 the point differential and corresponding average points per victory in the regular season make that Toronto squad particularly important in CFL history.

He says it’s between the ’97 Argos and ’81 Eskimos as the greatest CFL team. He says when you compare the two teams in terms of regular-season record (even though the CFL regular-season schedule in 1981 was 16 games), points scored, points allowed, average winning score and points differential in games, the teams are virtually identical.