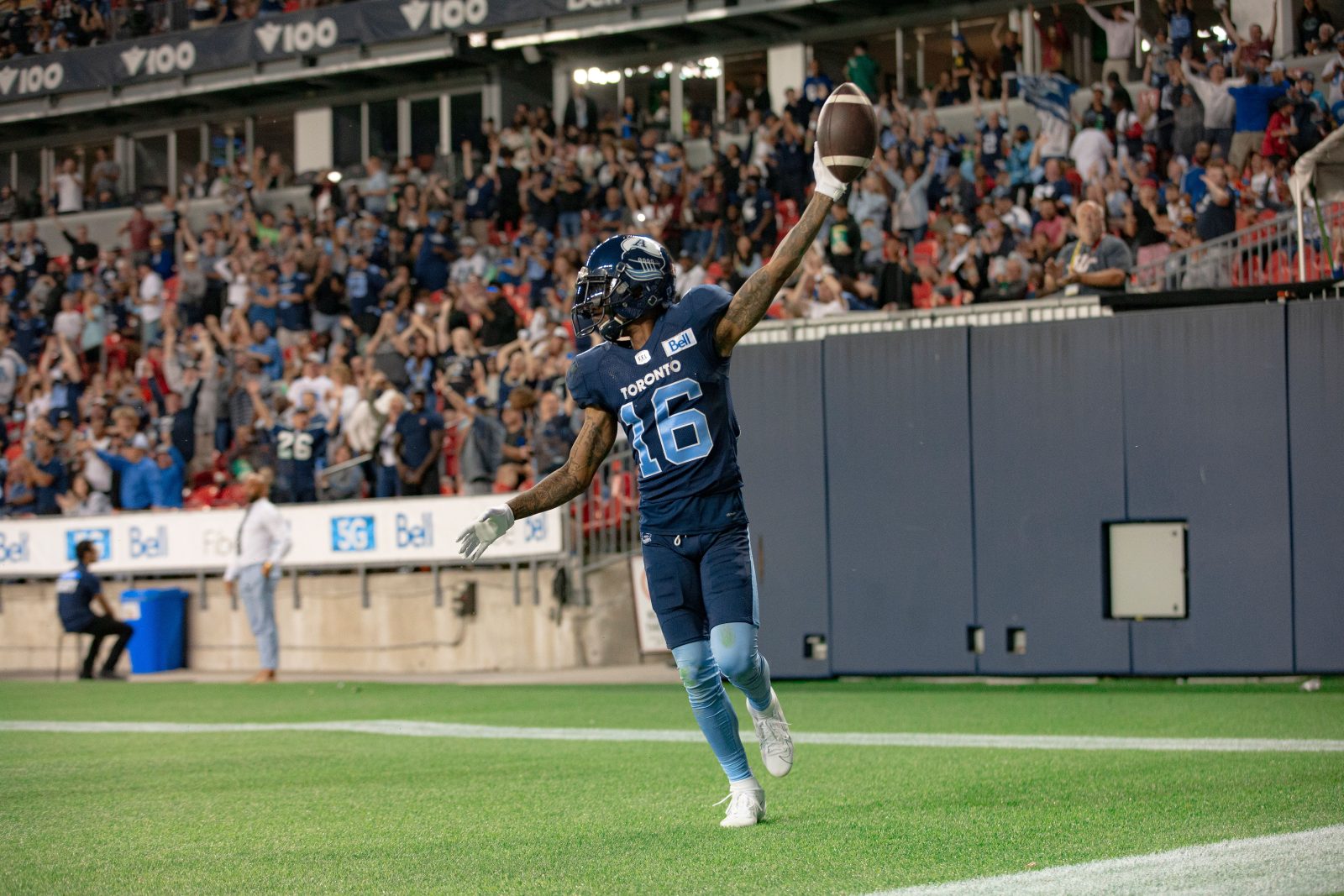 “I’m going to approach it as another game, but I’m going to wake up a little earlier that morning.”

Brandon Banks broke into a loud laugh after saying that, knowing this Saturday’s game against the Hamilton Tiger-Cats will be anything but just another game for him.

The receiver was a superstar in The Hammer. He was a fan favourite and led his team to four Grey Cup appearances; while winning the CFL’s Most Outstanding Player Award in 2019.

On the surface it seemed like an odd fit.

When you first think of Hamilton you think of steel mills; of the hard-working men and women that punch the clock for work and attend Ticat games for pleasure. The black-and-gold has historically been defined by hard-hitting defensive players like Angelo Mosca, Grover Covington, Ben Zambiasi, and Joe Montford; players who would roll up their sleeves and make an honest living on the field the way the fans did during their shift at Stelco.

Brandon Banks does not fit that mould.

His game has always been based on speed and finesse; totally understandable for a man listed at 5’7” and just 150 pounds. He brought fans out of their seats virtually every game, and it led him to acquire one of the league’s all-time great nicknames; “Speedy B.”

They loved him and he loved them right back.

But like the Winnipeg Blue Bombers did with future Hall-of-Fame running back Andrew Harris, the Ticats decided to move on from Banks at the end of the 2021 season, meaning the six-time CFL all-star was looking for a new home. When he found it, he broke the hearts of the Hamilton faithful. On February 13, Brandon Banks signed with the Toronto Argonauts. 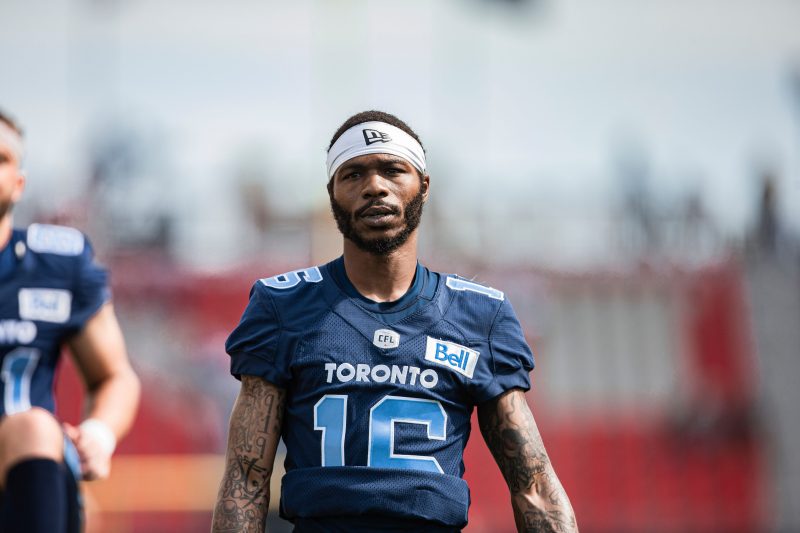 This Saturday he’ll face his old team for the first time in a regular season game.

“It’s in the back of my head, but it’s just another game for me,” Banks told Argonauts.ca. “I’m not going to make it bigger than what it really is. Obviously, everybody knows that’s my home away from home. I’m just happy to be playing football and going against them, it’s going to be a sight.”

Banks has shown flashes so far in his brief Double Blue tenure. He leads the team with three touchdowns, and among regulars has the best average per catch at 14.9 yards. But there have been some drops and at times it appears there’s been some miscommunication.

The 34-year old knows he has a lot more to give as he’s still on the learning curve in his new surroundings.

“I wouldn’t say I’m the Speedy B. that everybody knows,” he acknowledged. “I’m still getting back to (my game). That year off took a lot out of me; mentally, physically, everything. It took a lot out of me and I had to find that love for the game again. I think I finally found it here in Toronto. I’m having fun again and that’s the main thing I wanted out of this season, to have fun playing football.”

If Banks is having fun in Toronto, Toronto is having fun with him. He’s given the Argos an element that had been missing from the offence.

“He brings that second-level speed,” said Head Coach Ryan Dinwiddie when asked about Banks contributions, but he didn’t stop with the obvious. “He brings a great work ethic. We can move him around; he’s intelligent so I just don’t have to line him up as the number one receiver to the boundary, we can move him around and do different things.”

Outside of Hamilton, Banks was viewed as the Ticats’ most dangerous player; someone opponents would spend extra time game planning around. He also had the reputation of being highly intense and super-competitive, sometimes to a fault.

Listening to the receiver, that perception isn’t inaccurate.

“I think I’m naturally that way,” he confessed. “It’s just who I am, where I come from, and with the things I’ve been through in life. I’m a little-man syndrome guy with a chip on my shoulder. I just want to prove a lot of people wrong; I’ve had a lot of doubters all my life.”

It’s something Dinwiddie sees every day now that he’s working with him as opposed to seeing No. 16 from the opposing sideline. 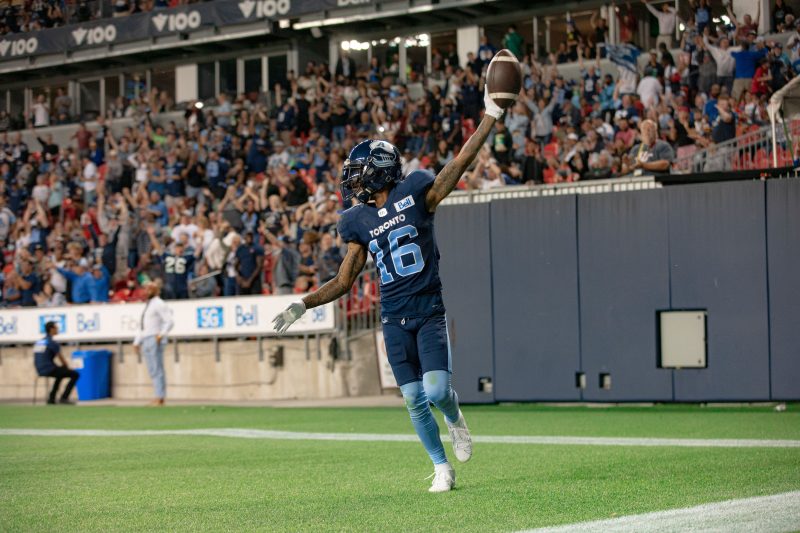 “Off the field in meetings (I’ve learned) how intelligent he is, how dialled in he is; his knowledge of the game,” said the coach. “He’s not just a great athlete, he’s a great football player. He understands football, he’ll be a great coach one day if he chooses to do that. And he’s a great teammate, guys in the locker room really enjoy being around him. He’s been a pleasure to have here. I know it probably wasn’t the easiest transition going to your arch-rival, but he found a way to make it happen.”

Dinwiddie is right, it wasn’t an easy transition for the North Carolina native. Banks admits it took some time for him to get the black-and-gold out of his system and replace it with a solid dose of Double Blue.

“To be honest, it was about Week Three,” he confessed. Not Week Three of training camp either, Week Three of the regular season. “Running out of the locker room on game day, with the game day atmosphere at BMO, that was a different feeling for me; I’m in blue now.”

It was difficult at first for him to adapt to the new colours, and for Hamilton fans who head to Toronto for Saturday’s game, it will be an uneasy experience for them. A man who meant so much to them is now wearing a boat on his helmet, wearing a colour combo they’ve been raised to despise.

So how does Banks think Ticat fans will react when he makes his first catch on Saturday?

On Saturday at 7:00 it will be Argo fans cheering for the man they once loved to hate. If he can find the end zone against his former team, those cheers will be loud, long, and exceptionally sweet.