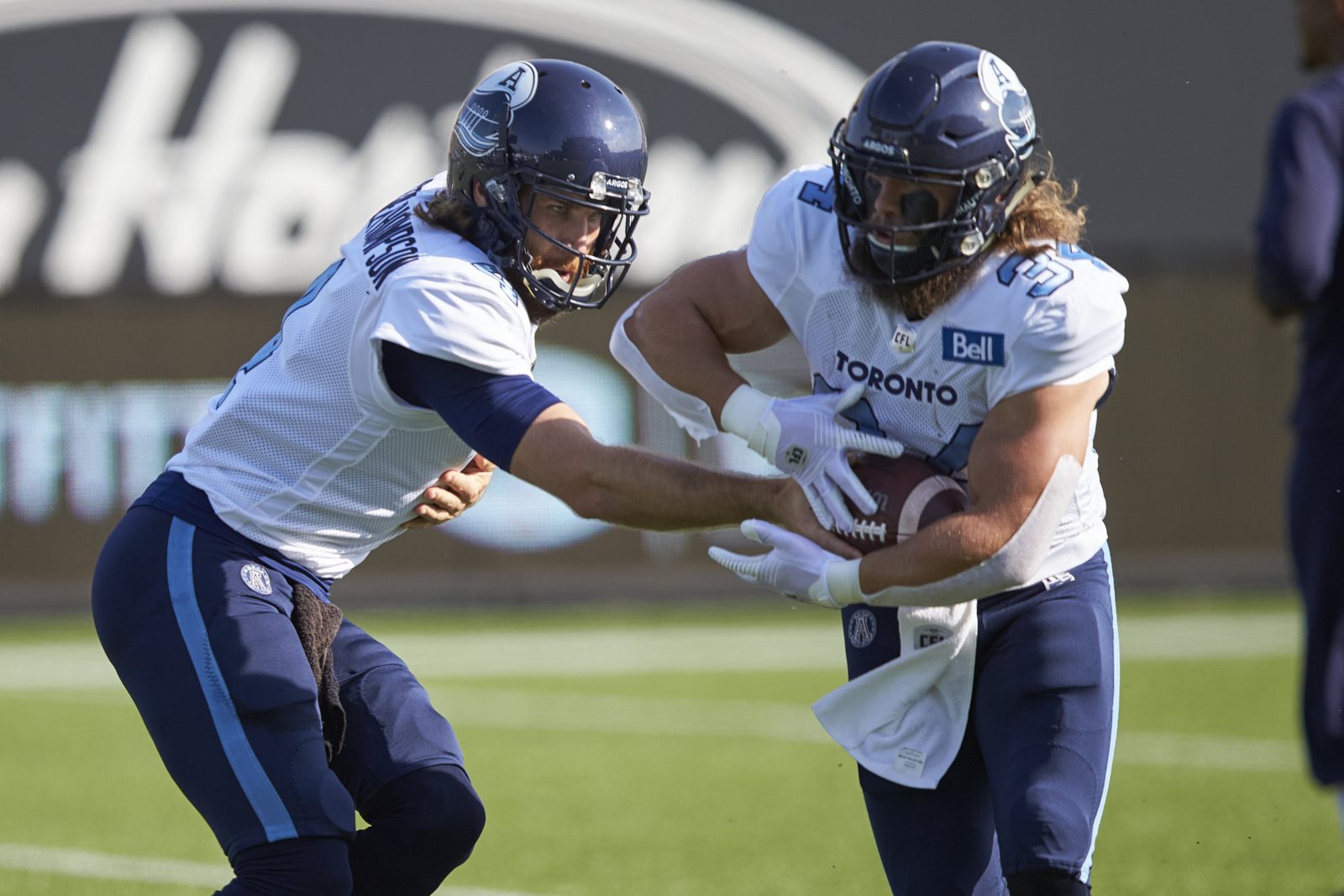 Toronto Quarterback McLeod Bethel-Thompson had off the ball to AJ Ouellette during warmup before their CFL matchup against the Hamilton Tiger-Cats in Hamilton on Monday, October 11, 2021. (CFL PHOTO - Geoff Robins)

Those three words are something football coaches hate to say, and starters hate to hear. When they’re spoken it means that something bad has happened; a player is underperforming, they’ve left the team, or more likely, someone has been injured.

The latter was the case in Ottawa last Saturday when John White IV left the game with an apparent knee injury. You didn’t need to hear a report from the sidelines to know it was serious; one glance at the face of the running back told the entire story.

It was early in the second half when White went down, meaning there was a need for a significant contribution from the “next man up” at the running back position. It opened the door for a familiar face – what little you can see of it through his explosion of facial hair – to return to the field.

Second-year Argo A.J. Ouellette took over, and with D.J. Foster not dressed for the game, the Ohio University product was destined to finish it.

“All year I just had to bide my time to get on the field, it sucks it had to come that way,” Ouellette told Argonauts.ca. “It seems like that’s how it has been my whole career. In college I got an opportunity due to an injury and some fumbles. It’s terrible it had to come this way, but I just stuck with my training and trusted the process.”

If there was any question at all about the dedication of the athlete, nobody could ever accuse Austin James Ouellette of not sticking with his training. The co-owner of the “No Name Athletics” facility in Piqua, Ohio is a gym rat who can squat 600 pounds and deadlift in the area of 700 pounds.

One more potentially surprising number is that he recorded a 36 ½” vertical jump at his pro day, something that came in handy in Ottawa when despite slightly rolling his ankle earlier on a special teams play, he hurdled an opponent during a run.

“Toward the end of the game I kept getting shots in the legs, Ouellette explained. “As soon as I broke through there were three DBs and I knew one of them was going to go low, so I had to look one in the eye and go up (laughs).”

Ouellette finished the game with 14 carries for 107 yards, an average of 7.6 per attempt; punctuated with a 30-yarder to put the final nail in the Redblacks coffin. 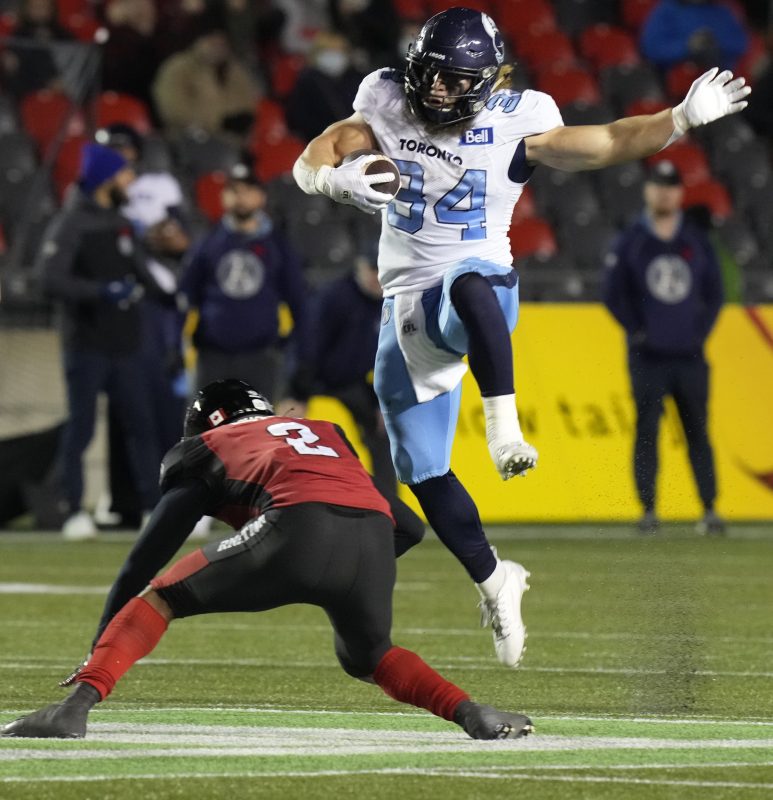 With the nail biter in Ottawa out of the way, the team is focused on the team’s biggest home game since the 2017 East Final; a Friday night tilt against the Hamilton Tiger-Cats with first place in the East on the line.

Ouellette was in the lineup the last time the Argos faced the Ticats, won by the Boatmen on Boris Bede’s dramatic last-second field goal. He knows that running against the black-and-gold’s front six is not going to be easy.

“It’s a tough group,” he said. “One thing I’ve noticed watching film is that they’re a smart group, along with being a strong, physical group. They’re not going to get out of their gaps, they’re gap sound and their linebackers play tough. They’re going to fill the gaps when they see it. We’ve just got to stay with the ground and pound all game and hopefully wear them out toward the end and big holes will open up.”

His Ottawa workload will be reduced this week by the expected return of D.J. Foster to the lineup. The potential A.J./D.J. combination will present problems to the visitors.

“Any time either time he or John (White) are in the game defences have to guess where they’re lining up,” said Ouellette. “They’re running backs that can play receiver. They’re very capable of just going over to the receiver room and moving there permanently, but they run the ball hard we’re going to keep them in our room.”

Another 100+ rushing performance out of the Argo backfield would go a long way toward helping the team beat the Ticats and clinch first place. A strong fan turnout would do nothing but help the Argos, because Ouellette knows that a good number of Ticat fans will be at BMO Field.

“They travel well,” he said. “We’re hoping to get a good crowd to slow their offence down and to basically keep our energy up.”