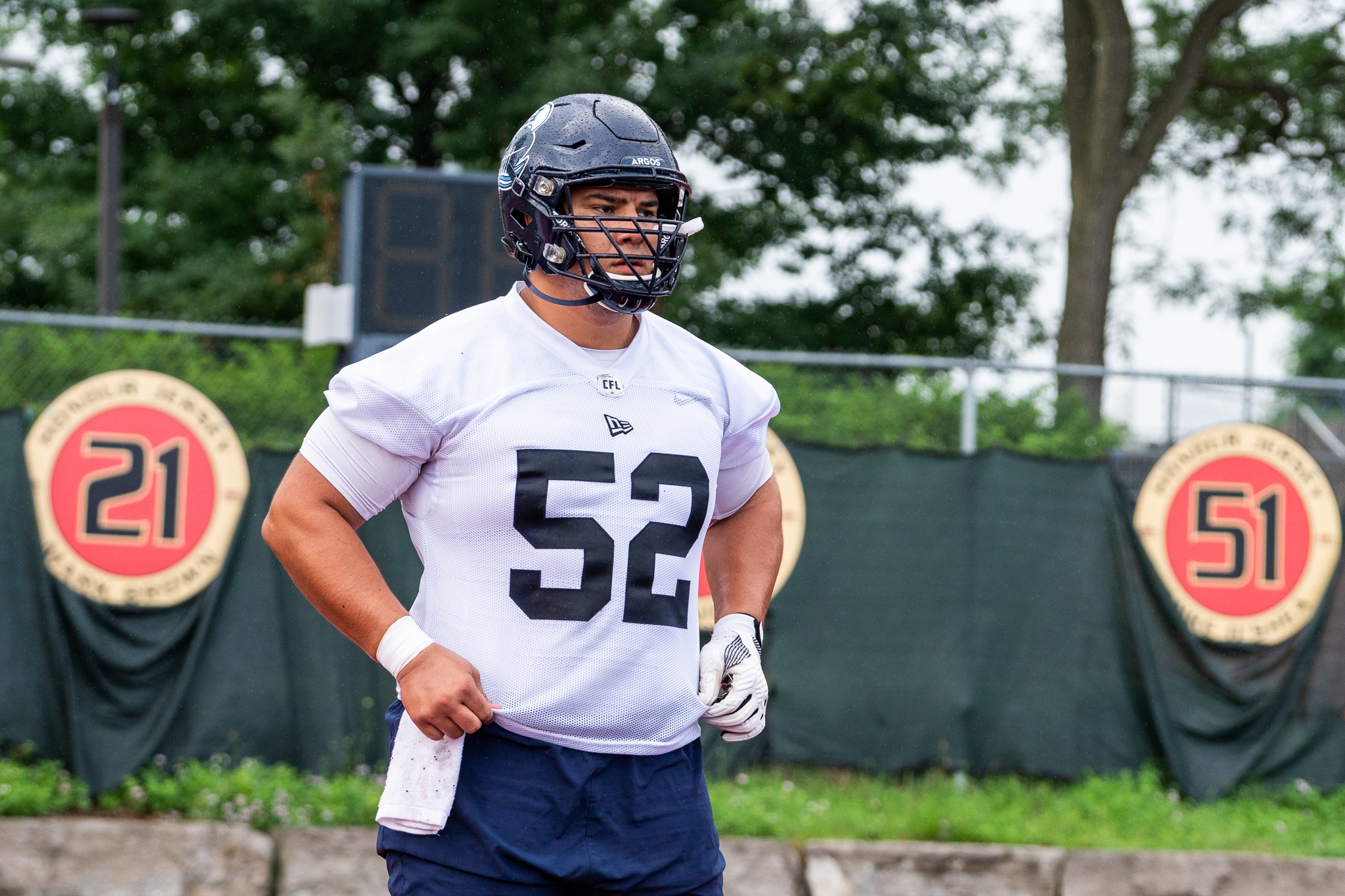 There’s an old adage that says when life hands you lemons, you make some lemonade. With several injuries along the offensive line the Toronto Argonauts have done just that.

The team has been supercautious with even the slightest twinge, making a nicked-up player watch from the sidelines. The reasoning is that it’s better to have him miss two days than make the injury worse and then miss two weeks or two months. It’s also given the team a chance to get reps for the young players in camp.

Among those newbies is Peter Nicastro, the team’s first-round selection in this year’s CFL Draft. He played mostly guard at the University of Calgary, with a few games at centre, the position at which the Argos want to see him perform.

With projected starting centre Cody Speller not in camp and placed on the suspended list, the door has been opened for Nicastro to get additional snaps; something he’s taken full advantage of.

“It’s super important,” he told Argonauts.ca after Wednesday’s practice. “Just getting used to the speed of the game, the power of our d-line and the speed of our d-line. Getting a lot of reps has definitely helped me. The progression from the beginning of camp has been pretty good, but I think it can be better.”

The staff has been impressed with Nicastro’s performance so far, likewise with the Argos third-round pick in the 2020 draft, Dylan Giffen. He took the first team reps at left guard on Wednesday and looked good in the process.

“Next man up, everybody’s got to be ready, right?” he said. “It’s training camp, people are going to get a little banged up, especially since we’ve had a year-and a-half off, so you’ve got to be ready to go when your name is called. The more reps the better.”

A mountain of a man at 6’8”, 315 pounds, he’s actually some 40 pounds lighter than his final season at Western. The dedication to the weight loss has paid off big time. 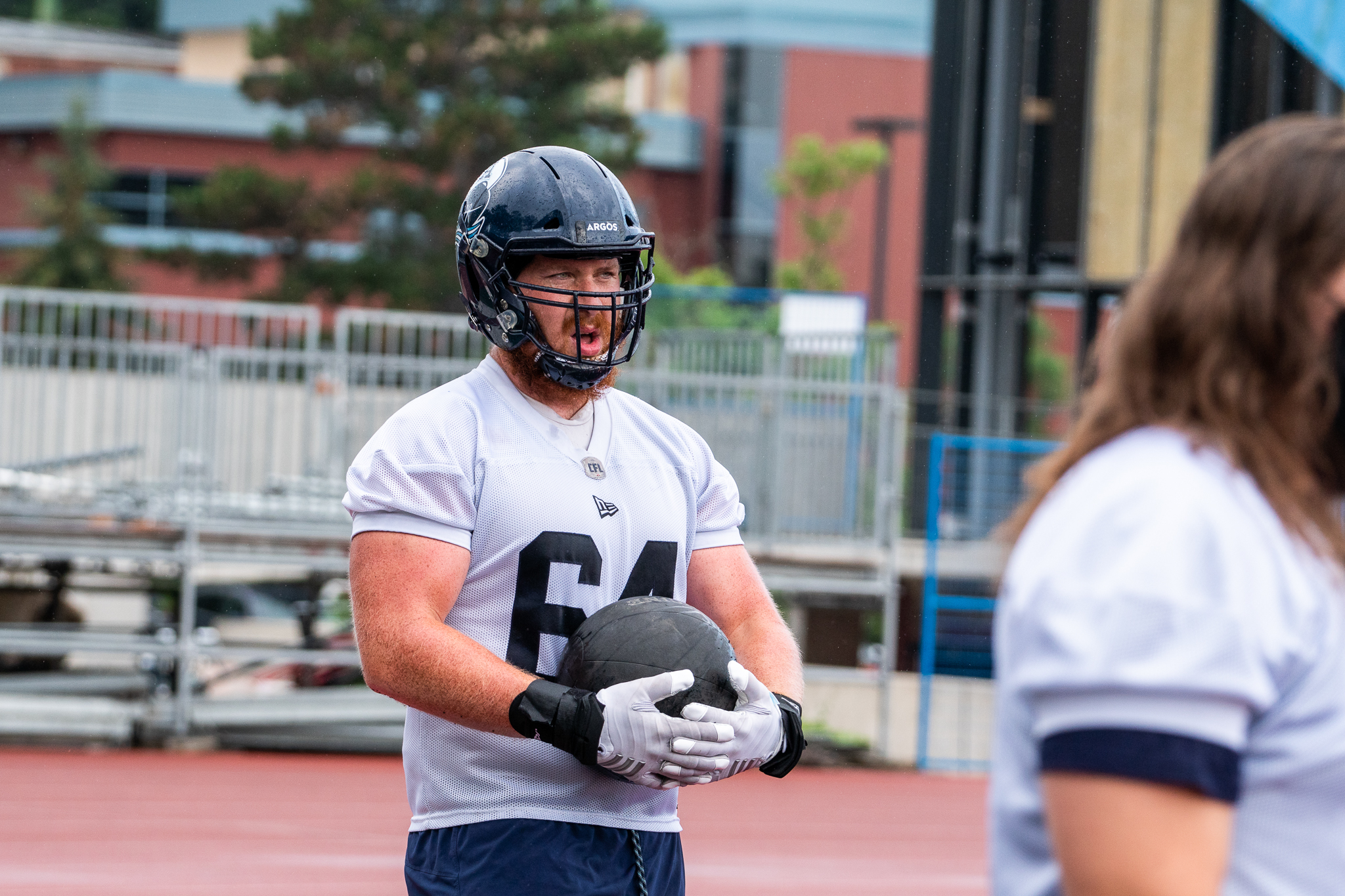 “I don’t think I’d be hanging around here with these guys if I was still 355 pounds,” he said with a smile. “Being lighter means everything. With these long, hot practices in July…I’m a healthier person right now and it feels way better. I couldn’t imagine still being that heavy.”

For the first-year pros, lining up against the star-studded defensive line every day is a class at Offensive Line University. Giffen has also gotten a lot from his professor, Offensive Line Coach Stephen McAdoo.

“Coach Mac is amazing,” he said. “He’s really helping me make the transition as easy as possible. Physically, the speed is insane. These guys are so fast, and there are so many guys who came up here and brought all of that skill with them. They’re such amazing pass rushers. The speed of the game is what I’m trying to learn and catch up to the most.”

The McAdoo love-in continued with Nicastro, who at times early in camp struggled with the most basic element of the position, the snap. He’s worked on that skill every day after practice and has shown steady improvement.

“Coach Mac really helped me with my snaps,” said the Calgary native. “The first couple of days were a little rocky, but just little tips that he would give me for snapping has really helped me improve.”

He’s also adjusting well to his new home in the middle of the line.

Training camp is a time for young players to show they belong in the CFL. For Nicastro and Giffen, they’re demonstrating that every day.

There was a bear sighting in Guelph Wednesday. For the first time this training camp, linebacker Bear Woods was on the field. He came late to camp after dealing with a family issue at home, then having to go through a quarantine period. He’s been ready to go and told Argonauts.ca after practice that one word summed up what it was like to be back on the field.

“Fun,” he said, flashing a huge smile in the process. “That’s the first word, fun. That was the longest break in my life without playing football, without putting on a helmet until today. It was a lot of fun just to be with the guys. Day one ain’t going to be where I’m going to be at on day 21, I can tell you that (laughs), but it was good to get out here.”

Nick Arbuckle was back at quarterback today. He had missed a couple of days with a slight hamstring injury.

Defensive back Matt Boateng was rocking a bucket hat on the sidelines today. That may be the first time that’s happened at a training camp day at Guelph since Rocket Ismail made that a fashion statement in his first year.

Llevi Noel is for real. He caught two more long passes, both of which would have gone for touchdowns. He’s trying to shake the image of being a possession receiver/special teams ace and show he can be the game breaking receiver he was at the University of Toronto. He’s been impossible to ignore.

It took a dozen days, but camp saw it’s first fight. Cooler heads immediately prevailed. It came on the last play of one drill, and the next drill was one-on-ones between o-line and d-line. By the time the players had made it to the end zone, everything was forgotten.

During one drill the Argos used the clock to mimic game situations. In one of those scenarios they were trying to set up a field goal at the end of a half or game. It eventually left Boris Bede with a 55-yard field goal attempt with no time left on the clock, which he drilled down the middle with at least five or six yards to spare.