When the 2018 season began there was excitement about how good the Toronto Argonauts secondary could be. Ronnie Yell, T.J. Heath and Abdul Kanneh were acquired in the off-season and the expectations were that this would be the most improved unit on the club.

To say things didn’t quite go as planned would be a shining example of Canadian politeness. Truth be told it was a disaster. Qudarius Ford suffered a season-ending injury in Week One, Heath was dealt to Montreal in mid-season, Kanneh missed most of the season with an injury, and the group was never able to come close to meeting the lofty expectations placed upon it.

There’s again a high level of confidence in the secondary as the Argos attempt to go from first-to-worst-to-first. Ford is back, as is Kanneh. Jermaine Gabriel, Alden Darby, Marcus Roberson, Trumaine Washington, Robert Woodson and Jonathan Dowling also return, while ball hawk Kevin Fogg joins the group from Winnipeg. 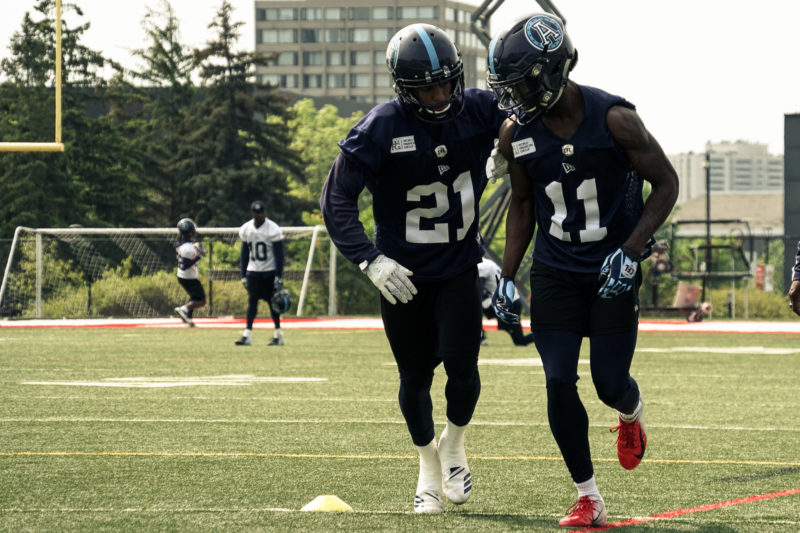 But the biggest newcomer is the head coach/defensive coordinator. Corey Chamblin returns after a year at Arkansas to attempt to right last year’s myriad of wrongs.  He has an advantage, the team is using his system, as opposed to simply running his system under last year’s DC Mike Archer. Chamblin knows the nuances of what’s being run.

The group is looking okay so far, but it’s not where the HC/DC needs it to be.

“There still needs to be some growth,” the coach admitted to Argonauts.ca. “They’re a very athletic bunch, but in terms of CFL football IQ, we have some work to do.  A lot of these guys have just been man (man-to-man coverage) guys down south, but the communication process between those guys needs to grow.”

Chamblin has a soft spot for the secondary. He played defensive back in the NFL and NFL Europe before beginning his coaching career. That means a lot to members of that group, including Kanneh.

“He can actually relate to what we’re talking about,” said the man who was born in London, England, but raised in Dumfries, Virginia – about 20 minutes south of Washington D.C. “He actually played the position and he knows the struggles that we have to go through. He makes it easier to eliminate those struggles and just focus on your keys and what you need to do. He really goes into it, dissects it, and fixes it.”

Kanneh would just as soon forget 2018. The team struggled, and he missed over half the season with an injury, yet Ford’s year was even worse.

Lost for the season in Week One, the Pensacola, Florida native is thrilled to be back on the field. He’s primarily lining up at the strong side, or “Sam” linebacker spot and like Kanneh, he’s thrilled about the return of the coach.

“Having Coach Chamblin back is a blessing,” Ford told Argonauts.ca. “When we’re watching film he sees everything. Stuff that we’d never think about, he sees. He’s giving us all that knowledge, we just have to take it in.”

Ford is generously listed at 5’9”, but what he lacks in height he makes up for in speed and skill. Perhaps the best cover man the Argos employ, his return is something that genuinely excites Chamblin. 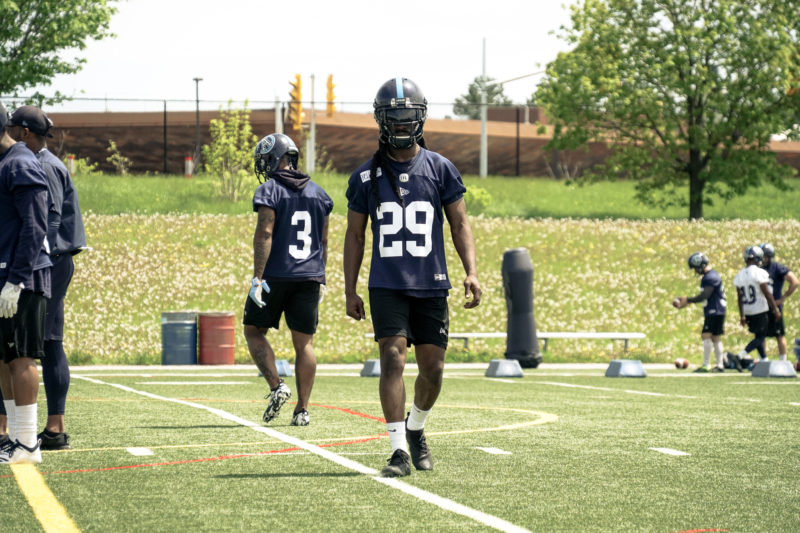 “He can play several spots for us,” said the coach. “He’s a presence on the field with his coverage ability, his blitz ability, and his ability to be around the ball. When he’s out there you feel really comfortable that he’s playing in the secondary.”

Likewise, he’s happy about the return of Kanneh and the chance to work with him for the first time.

“He’s physical,” emphasized Chamblin. “He understands the game. He has a great knowledge of it. There’s some technical things in terms of his eyes and different things that he needs to clean up being in a new system.”

Chamblin emphasizes that every DB needs to learn every position in the secondary. He also wants them to grasp what the opposing offense is doing so they’re not surprised by anything come game day.

It’s a tough ask, but the rewards will be high. This group, coupled with a much-improved pass rush, will make life a lot tougher for opposing quarterbacks this year than in 2018.