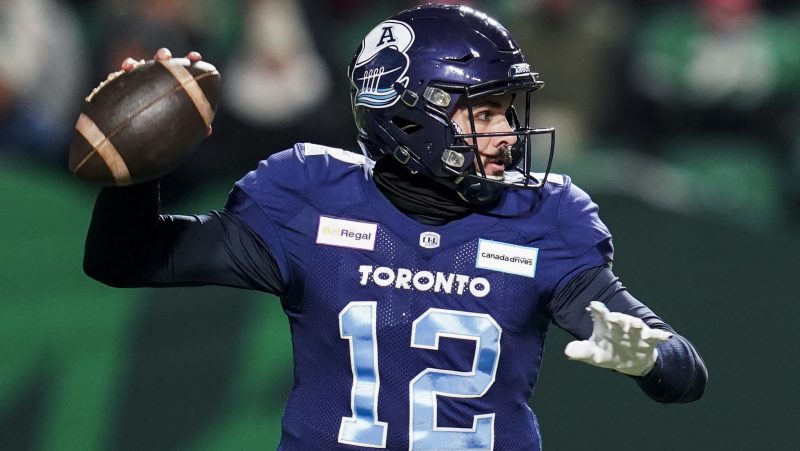 McLeod Bethel-Thompson had a message for Chad Kelly in the moments before the Argos’ rookie quarterback took over for him in the fourth quarter of the Grey Cup game.

He did. Chad Kelly went out there and he did it, going 4-for-6 for 43 yards passing and adding a crucial 20-yard rush to keep a touchdown drive alive, and finishing what Bethel-Thompson had started in Toronto’s 24-23 win over Winnipeg in the 109th Grey Cup.

The 28-year-old native of Buffalo, New York was at the controls when running back A.J. Ouellette found the end zone on a five-yard touchdown run with just over three minutes to play, providing the Argos with the winning points in an electrifying upset win over the two-time defending champions.

Entering the game after Bethel-Thompson suffered a dislocated thumb on his throwing hand, Kelly withstood the all-out pressure the Blue Bombers threw at him, and then struck with his biggest play of the night when he recognized they would not be coming after him.

“I just took what the defence gave me,” said Kelly of his relief effort. “Obviously they were gonna bring the blitz.”

But Kelly said it was film work that let him know he might be able to use his legs on a critical 20-yard run that turned a second and fifteen into a fresh set of downs at the Winnipeg 16-yard line. The Argos trailed the Blue Bombers by a score of 23-17 at that point, and were desperate for much more than just a field goal, not wanting to squander a big 44-yard punt return by Javon Leake, which had set them up on the Winnipeg 38-yard line. He was certain, Kelly said, that the Blue Bombers would not blitz when they dropped four pass defenders deep prior to the snap.

“I knew everyone was droppin’,” Kelly said. “I had to find a hole, make a play. Everybody dropped deep and I went and took off. I saw eight guys drop deep. I’m gonna take a little drop,” he explained of back pedalling in the pocket to feign a pass attempt, “buy some time, and then take off and run.”

The run injected a jolt of life into the Argos offence and Kelly followed it up with an eight-yard strike to receiver DaVaris Daniels on second-and-seven from the Winnipeg 13. Ouellette’s five-yard touchdown run followed and a Boris Bede convert gave the Argos a one-point lead that they would successfully protect in a wild final two minutes, which featured not one but two blocked field goal attempts.

“This is why you’re here,” said Kelly when asked about the pressure he must have felt he was under. “You’re a professional quarterback. Go and win the game.”

He may have caught a bit of a break, psychologically, in that he was thrust into the role in a flash, rather than needing to think about things ahead of time. Bethel-Thompson was out, and he was in. That was it. “It happened so quick that you don’t even blink,” Kelly said.

“It was amazing what Chad came in and did,” praised Bethel-Thompson. “To come in cold off the bench like that in a big time game, just shows he’s got ice in his veins. It was beautiful to watch.”

Bethel-Thompson admitted that he’d have loved to be out there, of course, but then added, in typical MBT fashion, “you gotta want it for the brother next to you as much as you want it for yourself.”

In the glow of his late-game heroics, Kelly was feeling pretty thankful for the mentoring of Bethel-Thompson, throughout the season and even before. Bethel-Thompson, Kelly said, phoned him on the day he signed with the Argos, and had a 45-minute conversation with the rookie.

“I can’t thank Mac enough,” Kelly said. “The amount of work that he put in. I saw what it takes to be a winner. I mean, he got us to this position. I just had to finish the job. I learned so much from him. He’s a friend forever, and I truly mean that.”

A point he got to in a flash, at the pivotal moment of the 109th Grey Cup game. And Chad Kelly, it turned out, was ready.