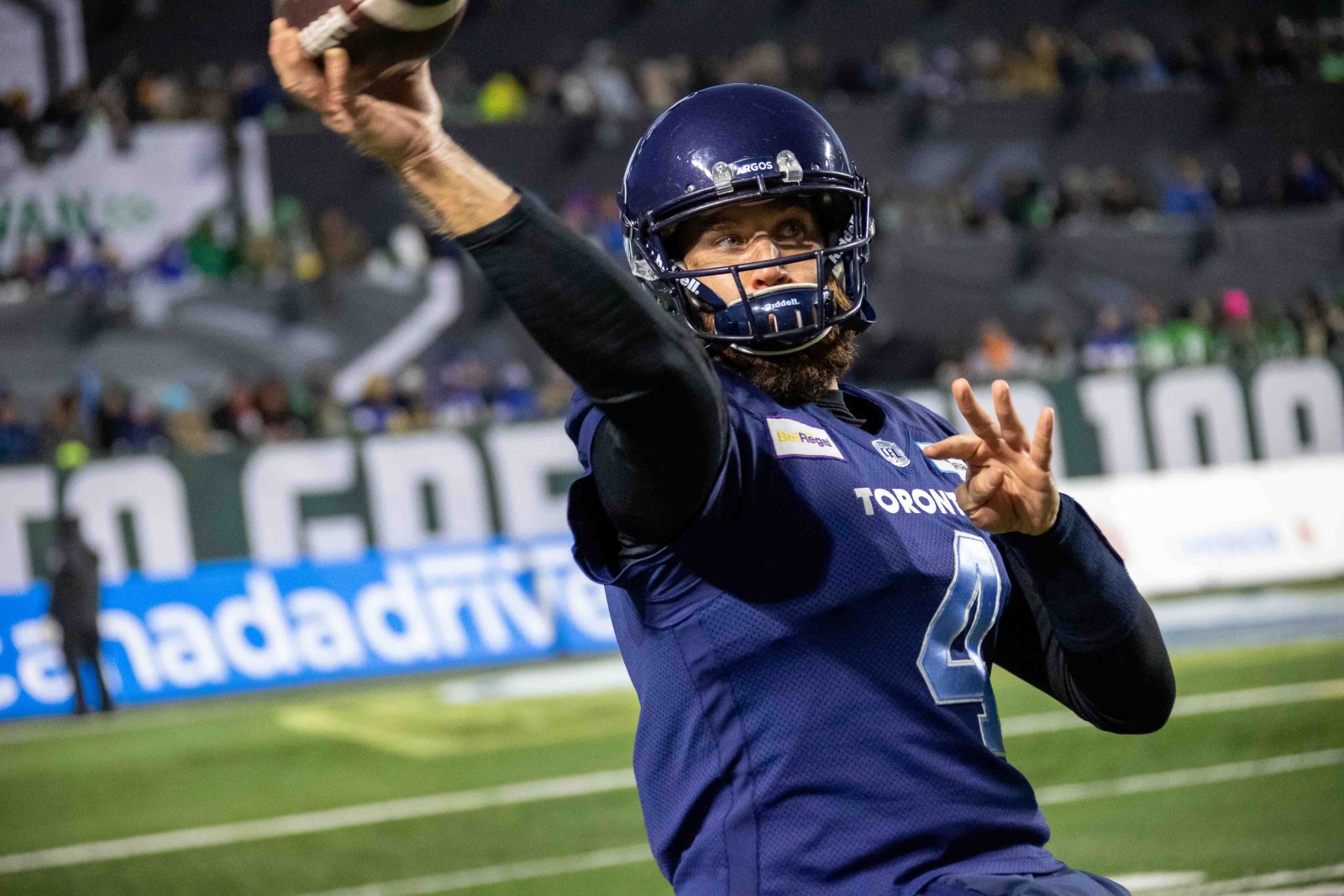 REGINA — Henoc Muamba wore the overjoyed, delirious look of someone that just had every emotion pulled out of him.

The Toronto Argonauts’ linebacker had poured every physical ounce of his being into what had just transpired at Mosaic Stadium. The Winnipeg Blue Bombers’ seemingly infallible reign over the CFL is over, or at least derailed for a year. Muamba, for the first time in his 11-year career, is a Grey Cup champion. His pass deflection, a game-sealing interception and three tackles earned him Most Valuable Player and Most Valuable Canadian honours in the Argos’ 24-23 win.

Standing on a stage in the end zone, the Grey Cup next to him for the first time and a pair of awards symbolizing his impact on the game, Muamba wept as confetti rained down on him.

Holding his four-year-old daughter Thea in his post-game interview, Muamba had shifted into celebratory Dad-mode. More than once he looked at his daughter, his teammates and the awards he was carrying and questioned if this was real life.

Former college basketball coach Jim Valvano famously said that if you laugh, think and cry in the same day you’re living a full life. Muamba radiated those vibes on Sunday night. In a broader sense, his entire team did.

“You don’t get to the interception without that first drop that I had,” he said.

“I just lost it. I lost it in the air,” he said. Linebackers coach Kevin Eiben and his teammates Chris Edwards and Shaq Richardson told him he’d have another opportunity.

“Who am I not to have the confidence in myself when I have some people around me that believe in me so much?” Muamba said. “When that second one came, there was no way I was letting it drop.

“There was no way I could do that twice in one game.”

The 2022 Toronto Argonauts will be remembered as the team that did what for the last two CFL seasons has been impossible, in handing the Bombers a playoff loss. The wrinkle in one of the more remarkable chapters written in Grey Cup history is that in the course of this year, they managed to overcome themselves along the way.

Talent hasn’t been an issue with the Argos. They had a pair of players as CFL All-Stars in 2021 (Shawn Oakman and Chris Edwards) and three in 2022 (Jamal Peters, Kurleigh Gittens Jr. and Wynton McManis). The last two years they’ve finished at the top of the East Division. This Argos team has had an edge, though and until recently, it’s always felt like that edge could turn and cut them down.

Asked if the dropped interception leading to getting the interception the next time was indicative of this team and its season, Muamba didn’t hesitate.

“One hundred per cent,” he said. “We made mistakes. We fought against one another, I’ll say it openly. And look at us. We’re united. We’re a band of brothers. We started playing together, encouraging one another, pushing one another, challenging one another. These leaders, these guys. I never felt like it was ever on my own shoulders.”

Through the Lens: Striking a championship pose

Argos head coach Ryan Dinwiddie credited the loyalty in the Argos’ room. A first-time Grey Cup champion as a head coach, he said that getting that loyalty was a process.

“I told my staff before I went to talk to the team how loyal they are and how much I appreciated the job they had done this year. They’re not only good friends but loyal coworkers.

“We had some ups and downs early in the year. We were very undisciplined. That was the loyalty and the buy-in, that guys would be selfless going into this thing. We had to have some tough conversations. I had to sit down with a few different guys and knew that we had to do better and they did. They did it together.”

As McLeod Bethel-Thompson stood in that confetti-littered end zone, his thumb dislocated and celebrating the late-game heroics of his backup, Chad Kelly, offensive lineman Dariusz Bladek picked him up and started talking about his quarterback’s impact on the team.

“He’s the reason why we got here,” Bladek said.

Inside the Argos’ locker room, Bladek credited Bethel-Thompson with a season-changing moment.

Dariusz Bladek credits McLeod Bethel-Thompson with a season-saving moment of honesty in a game this summer against Hamilton (Thomas Skrlj/CFL.ca)

“We have a lot of great men in this room. Sometimes the will to be great will cause friction,” he said.

“We’ve seen what we could be. We know what we could be. Sometimes family fights. Even my personal family, we’ve been in fights sometime, my little brother. But I’m telling you, I’m never ever letting anyone lay a hand on him. And I’ll always hold him up higher than anything and that’s what we have in this room.

In that slew of games that Hamilton and Toronto played this summer, Bladek remembered their Aug. 6 meeting where the Ticats held a 14-6 halftime lead. Toronto came back to win it 34-20.

“He’s the heart. He’s the leader,” Bladek said. “We have so many great men in this room. But Mac, his energy, his heart, the way he looks at life. A lot of people don’t know what happens behind closed doors. There’s a lot of pressure sometimes. Mac was always there.

“Knowing everything that he’s done, watching him run through that locker room in that Hamilton game and just letting it go, letting it out. It changed us. It changed our season.”

On Sunday night, the majority of CFL fans across the country were waiting for the Bombers to become the first team in 42 years to win three Grey Cups in a row. When Boris Bede had his field goal attempt blocked and Robbie Smith took a facemask penalty to give the Bombers more life, that edge that’s lingered around this team could have shown up again.

“Early in the season our team would have folded the tents and we would be yelling and screaming at each other and fighting on the sidelines. We stuck together today and I’m more proud of that than anything,” said Andrew Harris, who joined the team after helping the Bombers to those back-to-back Grey Cups.

“The biggest thing I noticed when I got to Toronto was the culture was very, very different from what it was in Winnipeg. I tried to instill some of the good things that we did in Winnipeg slowly and getting guys on board with certain things.

“I didn’t want to come out as a guy that’s new and putting my presence on things without having done anything yet. There was a lot of great things that happened this season but the biggest thing is we sacrificed for one another and put egos aside and just…let it all hang out for the greater good.”

Having lifted the Grey Cup four times over his 12-year career, Harris has seen his share of in-game drama and emotional swings. That this team — one that fought against itself as much as its opponents earlier this year — stuck together to make history will stick with him.

“It was wild, it was an emotional game. That’s got to be one of the top games, Grey Cup games, it’s got to be top-five in terms of raw emotion,” Harris said.