Recap: Argos remain undefeated at home with win over Als 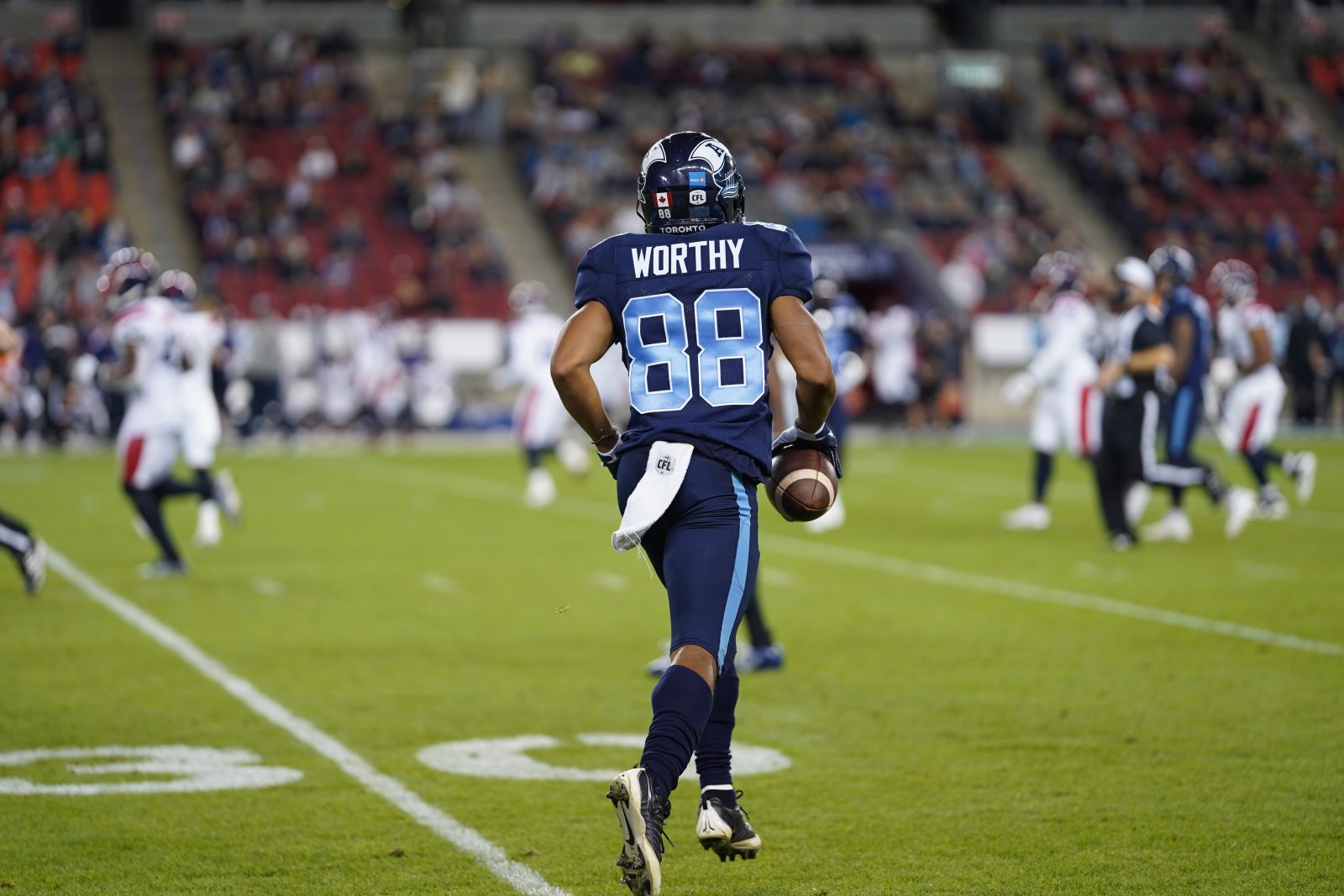 Recap: Argos remain undefeated at home with win over Als

TORONTO — McLeod Bethel-Thompson threw two touchdown passes to help lead the Toronto Argonauts to a 30-27 win over the Montreal Argonauts in Week 8 action on Friday night at BMO Field.

Bethel-Thompson got the start at quarterback for Toronto with Nick Arbuckle nursing a hamstring injury, and he helped give the Argos a 21-10 lead entering halftime with a pair of touchdown tosses — including a 45-yard deep bomb to Chandler Worthy with 16 seconds left in the half.

Jake Wieneke scored a last-minute touchdown for the Als, but Montreal was unable to complete the comeback on the final drive.

Montreal running back William Stanback moved past Edmonton’s James Wilder Jr. to grab the league rushing lead — finishing the game with a game-high 133 yards on 19 carries.

Bethel-Thompson completed 13-of-19 passes for 210 yards, while rookie Argos receiver Damion Jeanpiere finished with a team-high 91 yards on four catches.

New defensive consultant Chris Jones helped guide an Argos unit that finished with two interceptions, a pair of sacks and a fumble recovery.

Both defences started strong to hold the game scoreless early on, but Bethel-Thompson began to establish a rhythm near the end of the first quarter. He converted a long second down with a 30-yard completion to Jeanpiere, and he followed it up three plays later with a 15-yard touchdown pass to Kurleigh Gittens Jr.

Gittens beat Monshadrik Hunter with a sharp route in the end zone for his first career CFL touchdown, and Bede added the extra point.

Adams completed six straight passes on the drive before connecting with Lewis on a play-action pass as the receiver crossed the field. Côté kicked the extra point to tie the game at seven points apiece.

Montreal recovered a fumble on the ensuing kickoff after Alexandre Gagné stripped the ball away from Toronto returner Worthy. The Argos’ defence stood strong to keep the Als from adding another major, with defensive lineman Shawn Oakman sacking Adams on second down to stall the drive deep in Toronto territory.

Montreal settled for a 17-yard field goal by Côté to take the lead with seven minutes left in the half.

But Bethel-Thompson quickly led the Argos down the field after completing a 25-yard pass to Worthy and a 22-yard pass to Ricky Collins Jr. Running back D.J. Foster finished off the impressive drive with a tough three-yard touchdown run up the middle, and Bede kicked the extra point to put Toronto up 14-10.

The Argos secured a turnover with just 25 seconds left in the half when Chris Edwards intercepted Adams on a pass intended for Wieneke, and Toronto’s offence proceeded to capitalize in a big way.

Bethel-Thompson got things started with a 10-yard completion to Gittens before following it up with a 45-yard strike to Worthy for the score.

Worthy burned Tyquwan Glass deep down the right sideline with a go-route, and Bethel-Thompson finished the job by launching a deep ball over Worthy’s shoulder for the touchdown. Bede’s successful extra point gave Toronto a 21-10 lead entering the half.

Toronto’s defence forced another turnover in the third quarter when Shaquille Richardson punched the ball out of B.J. Cunningham’s hands, with Crezdon Butler recovering the fumble for Toronto. Veteran defensive lineman Almondo Sewell sacked Bethel-Thompson to force a punt, and the Als seized the opportunity to get back into the game.

Montreal engineered a 12-play 61-yard touchdown drive that was kept alive with a successful third down QB sneak by Adams.

Key catches by Quan Bray, Kaion Julien-Grant and Wieneke helped set up a three-yard touchdown run by Stanback to cap the drive off. Stanback powered across the goal line through a pile of bodies for the score, and Côté’s extra point cut Toronto’s lead down to just four points with two minutes remaining in the third.

The Argos extended their lead to start the fourth with a 29-yard field goal by Bede, and he added a 32-yarder later in the quarter to put Toronto up 27-17.

But Montreal managed to make it a one-possession game with under seven minutes to play. A 17-yard run by Stanback and a pair of first down pickups by Bray led to a 38-yard field goal by Côté that made it a 27-20 game.

Momentum shifted back in Toronto’s favour after an errant throw from Adams was picked off by Richardson after he beat Lewis to the ball, and Bede remained perfect on the night with a 37-yard field goal that gave Toronto a 10-point lead.

Wieneke took matters into his own hands and came through with a huge 49-yard catch-and-run before following it up with a 27-yard touchdown catch. Côté added the extra point to make it a three-point game with just 55 seconds left in the game.

But the ensuing onside kick attempt was recovered by Toronto’s DaVaris Daniels, and the Als ran out of time on their final drive.

Montreal’s next test comes on the road against the Hamilton Tiger-Cats on Oct. 2, while Toronto will have a week off before hosting the Ottawa REDBLACKS to kick off Week 10 on Oct. 6.