When Joe Krol signed with the Toronto Argonauts on the evening of October 18, 1945, he joined a good team that had already clinched a playoff spot. Ahead loomed a seventh straight postseason showdown with their bitter rivals, the Ottawa Rough Riders, for the championship of the Big Four, the premier ‘interprovincial’ football league in eastern Canada.

Having watched it happen in each of the previous three seasons, the Argonaut faithful had grown used to the disappointment of the club falling flat at this red-and-black hurdle that kept barring the Boatmen’s path to the inter-league playoffs for the Grey Cup. The rebuilding Argos had done better on the field than expected in 1945, but it was lost on nobody that the Ottawa ‘huskies’ had owned the Double Blue in their two regular-season meetings.

Back in September, as they rebuilt the Argos’ roster after three long seasons on war-time hiatus, club chairman Tommy Alison, team manager Earl Selkirk and head coach Teddy Morris had tried to lure Krol into a double-blue sweater. Small wonder. The twenty-six-year old back was coming off back-to-back Grey Cup appearances with the Hamilton Wildcats, and in six seasons since beginning his sophomore year at the University of Western Ontario had led the Mustangs to an intercollegiate title and delivered the first Grey Cup to Steeltown in over a decade.

It was the era of the single wing formation with its lopsided seven-man line, both guards lining up on the strong side of centre, and its direct snaps to whichever back would carry or throw the ball. The ‘deep’ halfback, who lined up in the shotgun behind centre, might carry the ball himself, or attempt a pass or lateral to another back or to one of the ends, or kick for points or better field position. The best deep backs in the business thus were ‘triple threats’ because they could hurt an opponent with their feet, their passing arm or their kicking leg.

Joe Krol was the biggest triple-threat that Canada ever produced. To get his signature on a contract, the Argos had to be patient. Krol was intrigued by the Boatmen’s contract offer (which included a good insurance job arranged as a sweetener) but first he wanted to try out with the Detroit Lions. By the time he walked away from the NFL and became an Argo, the Big Four season was almost over.

Pending league approval of the contract, Krol began his Argonaut career in civvies in the Varsity Stadium press box. Watching as his new teammates tangled with the Hamilton Tigers, he saw that the Boatmen had a rugged line of wily veterans and a group of athletic but inconsistent young backs. The Argos fell behind, and with three minutes to play they still trailed the visitors 10-8.

The crowd was loudly reminding the home players that no game against the Tigers was ‘meaningless’, no matter what the standings said, when running back Royal Copeland changed the jeers to cheers by taking a second-down snap seventy yards for a spectacular touchdown, zigging and zagging across the field before making his trademark dive into the end zone.

A magnificent athlete with the heart of a lion, Copeland was temperamentally in sync with Teddy Morris and together they contributed the spirit and energy that powered the ‘Big Blue Machine’. Krol had different wiring. He made his contribution, not in the engine-room, but in the cockpit, where he piloted the Morris machine to three straight Grey Cups with his unique mix of sublime skill, carefree swagger and merciless killer instinct.

Making his Double Blue debut at Molson Stadium in Montreal on the last day of the season, Krol felt his way around his new teammates and Morris’s system for thirty minutes. In the second half he threw four touchdown passes to Copeland, who thereby set a club record for touchdown catches in a game that still stands today. 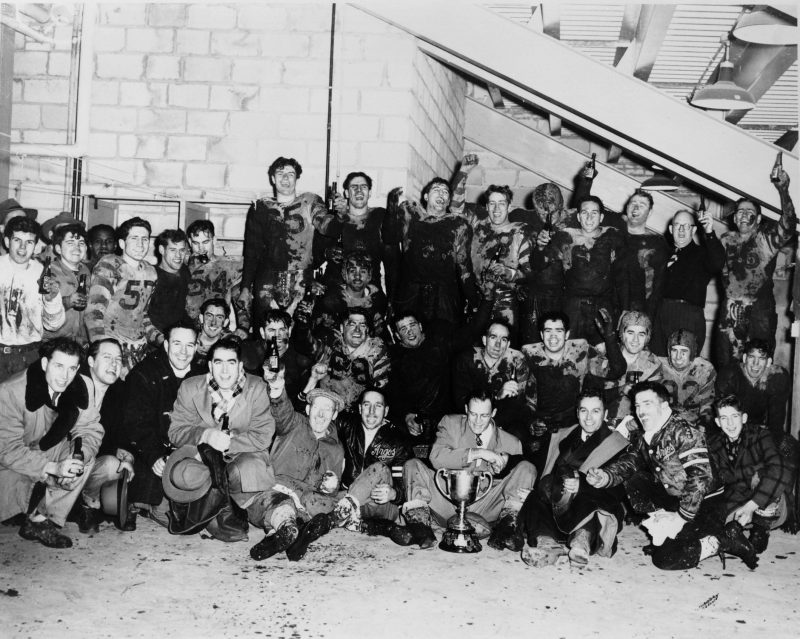 Seven days later the confident Boatmen trounced Ottawa 27-8 at Varsity in the first leg of their home-and-home playoff series. Playing for the first time in front of the Argo faithful, Krol tossed another four touchdown passes to demolish the Riders. He also made a nice gain himself catching a pass from Copeland, and rounded out an unforgettable home debut with three big defensive tackles from his safety position.

So began a remarkable ride on which Teddy Morris and his Big Blue Machine, in the space of twenty-four months, powered to a 14-7-3 league record and enjoyed a streak of postseason invincibility that brought three straight Big Four titles home to Bloor Street, along with three straight Eastern Final victories and three straight Grey Cups. Along the way Joe Krol was a perennial all-star, became the first person to be twice named athlete of the year by the Canadian Press, and became the first athlete in a team sport to be awarded the Lou Marsh Trophy.

And in Toronto, of course, he became a King.

Krol racked up such accolades not through his playing statistics, but through being, for four seasons, ‘the best money player in football’. When the stakes went up or the chips were down, especially in the playoffs, you could bank on getting a performance from King Krol to rival the best that anybody had ever seen.

There was the time in Hamilton, when he scored two touchdowns and tallied thirteen points, three times clawing the Argos back into the game, before kicking a 55-yard single at the final whistle to salvage a 15-15 tie. Such was his performance that day that a mob of Tiger fans — Tiger fans! — ‘carried him off the field shoulder-high’ as a hero.

There was the time in Montreal, the Double Blue needing a win against the first-place Alouettes to make the playoffs, when he threw a touchdown pass and kicked the rest of the Boatmen’s points in a clutch 9-8 victory.

There was the time in Steeltown when he threw two touchdown passes, caught one from Copeland and smashed through the Tiger line for a rushing touchdown to pace the winless Boatmen to a stirring 34-25 win to spark a seven-game unbeaten streak.

There was the time in the 1946 playoffs when he shredded the Alouette secondary and in the fourth quarter, protecting a 12-1 lead on the road, recovered a Montreal fumble, picked off one pass and knocked down several more.

There was the time in the 1947 playoffs when his three lonely singles secured the Argos a 3-0 victory in Ottawa, acclaimed as ‘an amazing kicking display’ in wintry conditions so atrocious that football could scarcely be played by any other player on the field.

And then, there were the Grey Cup performances.

In 1945, two touchdown passes and a 60-yard interception return for a touchdown, plus his ‘best play all day’: a key block on a weak-side end-run to spring Doug Smylie for a 35-yard gain.

In 1946, two touchdown passes and touchdown catch, plus the setting up of two more touchdowns, one with an onside kick that Copeland turned into a 33-yard gain, and the other on a 58-yard bomb caught by end Leo Deadey, described as ‘the longest completed pass ever at Varsity stadium’.

In 1947, a 40-yard touchdown pass, followed by a pair of late singles to erase a 9-0 Winnipeg lead, and finally — an iconic moment in Grey Cup history — his clutch 40-yard single punted on the stroke of full time to steal the Cup out from under the Bombers’ noses.

This uncanny capacity to find extra gears in clutch situations opened the door to some commentators to suggest that King Krol was just ‘coasting’ the rest of the time. The unflappable star laughed off such insinuations that he was ‘lazy’. Psychologically, he was in a league of his own. He was the class clown that a dressing room led by Teddy Morris and Royal Copeland sometimes needed to help loosen up and galvanize the players. Nobody but a ‘King’ could have gotten away with such irreverence, even if Morris recognized the boost that Krol’s shenanigans could give to his team.

No sports dynasty lasts forever, and the Big Blue Machine helped to bring about its own downfall. Frustrated by the superiority of Morris’s unsinkable Boatmen, their rivals in Montreal, Ottawa and Hamilton flung open their doors to American coaches who swore by the ‘T’ formation and U.S. players who knew how to run it. This Americanizing revolution in the Big Four, along with ongoing issues with his left knee after suffering cartilage damage in a game in October 1947, marked the beginning of the end for Teddy Morris and the ‘Touchdown Twins’.

Even facing seven U.S. imports on each opposing team, and with Krol hobbled for much of the season by his bad knee, the Double Blue were not eliminated from the 1948 playoffs until the last game of the season. Lingering issues after off-season surgery forced Krol to miss half of the disastrous 1949 season that cost Teddy Morris his job.

In his introductory press conference in 1950, new head coach Frank Clair indicated that Krol would be replaced by a US import. He would soon learn the folly of betting against this fading star. Now thirty-one years old, King Krol made Clair’s rebuilt Argos on the strength of his magnificent punting, his football IQ and his strong safety play. Despite there being no love lost between Krol and his coach, he went on to repeat this feat three more times, adding a fifth and sixth Grey Cup to his career tally along the way.

Undoubtedly Clair recognized what King Krol meant to the Argonaut faithful, but there was no tokenism involved in keeping him on the roster. In the infamous ‘Mud Bowl’ game in 1950, Krol came through in the clutch yet again with a vintage punting performance in atrocious ‘conditions that greatly helped Clair to win his first Grey Cup. And surely no so-called ‘punter’ in the history of the position was ever as dangerous a threat to turn fake kicks into big plays. Even with limited playing time there was no stopping King Krol from scoring or setting up touchdowns, the fans roaring their appreciation every time.

Sent in to play halfback in the dying minutes of a meaningless game in Montreal on October 18, 1953 — the eighth anniversary of the day he became an Argo — Krol was brought down in the backfield by Tex Coulter and blew out his bad knee. When he announced his retirement the next morning, the news was widely reported across Canada and the USA.

The last home game of the season became ‘Joe Krol Day’ in Toronto — a chance for the city to say good-bye to the King. Speeches, ovations and presentations of gifts from fans, local businesses and charities, and the City were the order of the day. The Argos presented him with a car ‘in the Double Blue Argonaut colours’ and announced the retirement of his number 55, making Krol the first player to be honoured in this way by the club. 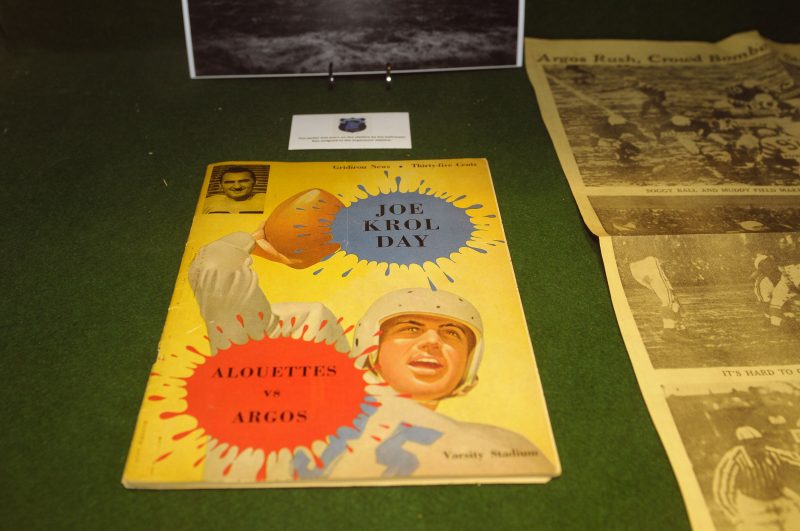 And then he was gone: the greatest player ever to don the double blue in terms of the breadth of his skill-set, his value to his team, his stature in the game and his ability to rise to the occasion. It was another fifty-one years before the Argos managed to match the number of Grey Cups that King Krol managed to win with them in an eight-year span. He stuck around long enough to see it happen, hearing his final full-time whistle on December 16, 2008.