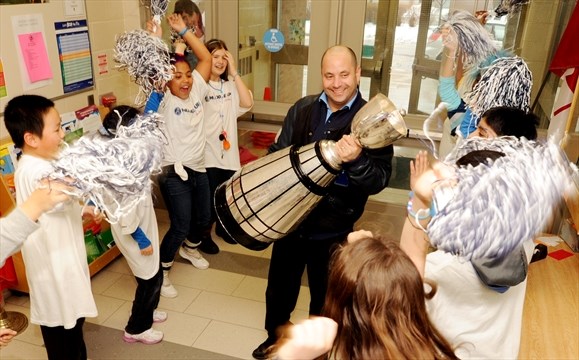 Jason Colero is the Community, Alumni and Education Programs Specialist at MLSE and the Toronto Argonauts. He is the founder of the Huddle Up anti-bullying program and has been representing the Argos in the community for over two decades. He shares with Argonauts.ca some of his Grey Cup memories.

When Grey Cup parties are over and fans have left the stadium, one of the oldest trophies in North America begins a journey. The initial moment the trophy arrives in a dressing room it begins a series of pictures with family, friends, co-workers and teammates. Later it will be these photos that will trigger amazing memories of the Grey Cup and what it took to get there.

I have so many stories to share but will focus on a few that I was a part of, beginning with my first championship in 1991.

It was a year filled with excitement beginning in February with the announcement of a new ownership group consisting of Bruce McNall, Wayne Gretzky and the ultimate Argo fan, East York’s John Candy. Everywhere you went that year, people would ask, “What’s it like to have John Candy as an owner?” or, “It must be so cool having Wayne Gretzky as your owner.” We had a lot of fans coming to our games just to catch a glimpse of these stars. 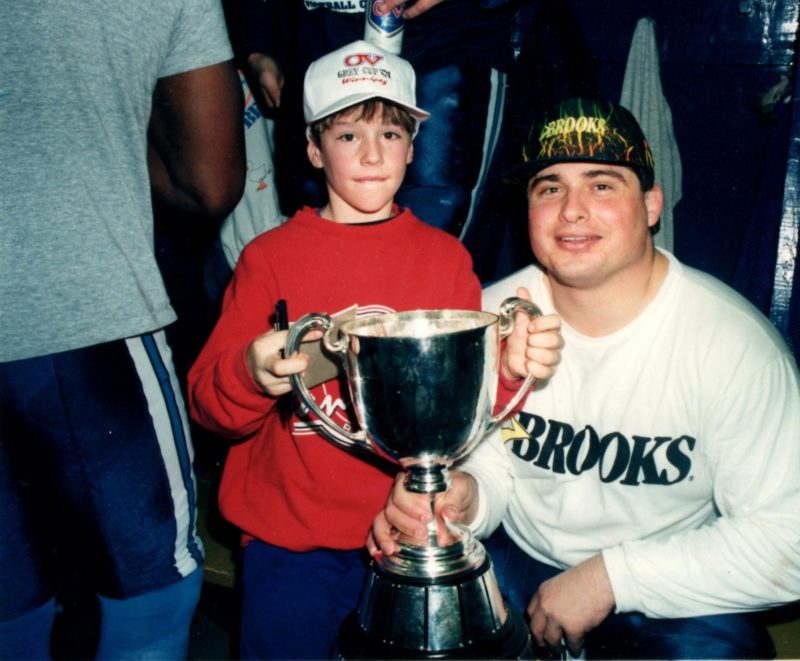 I recently asked offensive lineman Dan Ferrone, a member of the ’91 team and now Vice-President of the Argos Alumni Association, about his post-game memories. Since it was such a cold day, the Grey Cup presentation was shortened, and Dan got to bring the trophy into the locker room.

Candy, Gretzky and McNall were all sitting beside Ferrone’s locker when Dan saw his son come into the room with tear-filled eyes. As he sat there, he thought what an amazing father and son experience this would be with the Cup sitting right in front of him. That unforgettable moment came to a crashing halt when his son’s first words to him were, “That’s Wayne Gretzky!” Dan said it just went to prove that nothing in Canada could compete with Wayne Gretzky. Nonetheless, it was nice to be able to share that moment with his son. 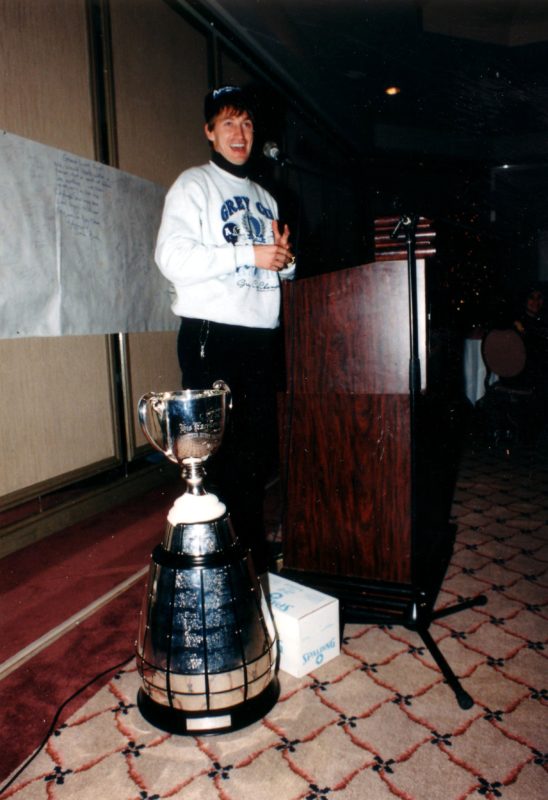 I figured someone who had played in the CFL for 23 seasons and won four Grey Cups with three different teams would have some cool memories. Damon Allen had won three championships before his win with the Argos in 2004. But that year was special because as Damon said, you couldn’t write a better script for the way it would go down.

A year before the ‘04 Grey Cup the BC Lions cut him, saying that he was past his prime and didn’t have enough gas left in the tank. After suffering a broken tibia, many said it would be hard to come back at all, let alone that season. He ended up working to get himself ready to play in the East Final, win it and then go on to face the BC Lions in the Grey Cup. 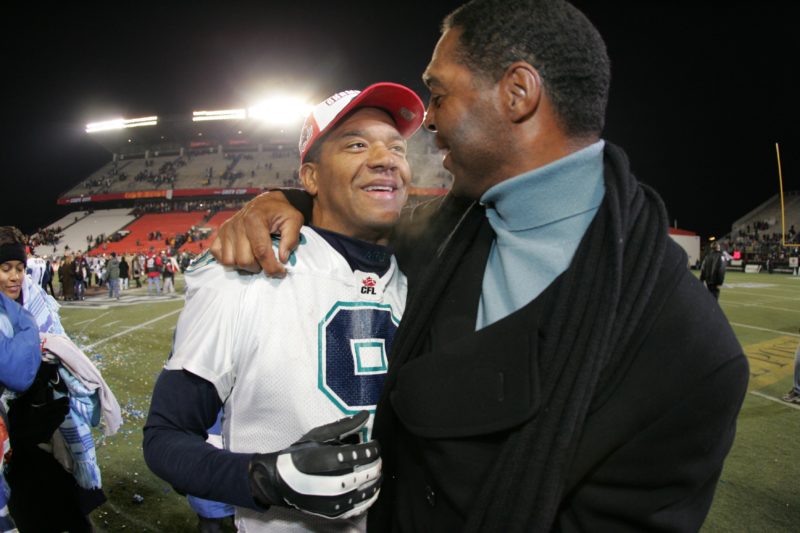 If that wasn’t enough motivation to win the title, this was the first Grey Cup that his brother, Pro Football Hall of Fame running back Marcus Allen, would attend. It was something the QB would always remember. As for the Lions’ prediction about Damon, they were off by four years, as he played until 2007.

One of the many memories I will always cherish involved the Grey Cup and our Huddle Up program. Prior to our 2004 season I made a promise at every school assembly. If we won, as a thank you for helping us prevent bullying, I would bring the Cup back to their school. 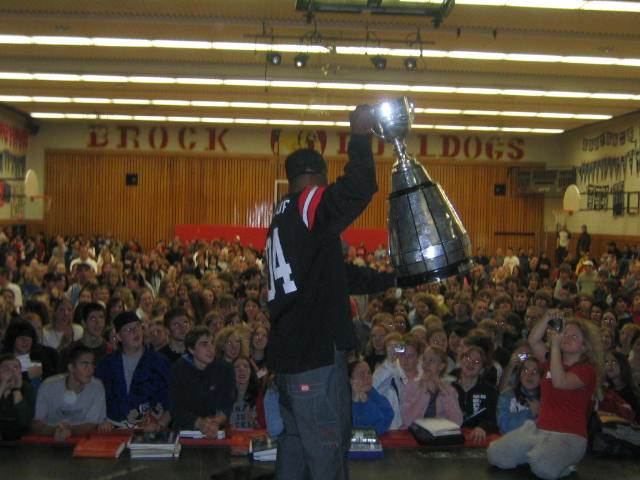 Students were tuning into our games all season. When we got to the playoffs, we received a whole bunch of emails and calls seeing if we were still going to bring the Cup. After we won, we kept our many promises. It was a hectic and daunting task, but with several players we made it to 40 schools in just four days.

As tiring as it was, we had so much fun and felt so good we decided to do it again in 2012 and 2017. Players like John Williams, Joe Eppele, Clifford Ivory, Chris Van Zeyl, among many others, felt that this was a way to share their success with the students and teachers that were part of Huddle Up. These players felt as though they were creating memories, and for some, they were paying their success forward.

That’s something I was able to do with the Cup without even knowing it. When I was bullied in high school, one of my football teammates spoke up for me and changed and saved my life. During the tours with the Cup that year I managed to take it to the elementary school where his kids attended. When we connected a little later, he told me how special it was for his kids to know that he helped it all happen with his one act several years ago. That will be a memory with the Cup I won’t ever forget.

The legacy of the Grey Cup lies deeper than just the names engraved on it. A big part of its meaning lies in the many memories it has been a part of in so many people’s lives.

I can’t wait to see the memories it creates for years to come.