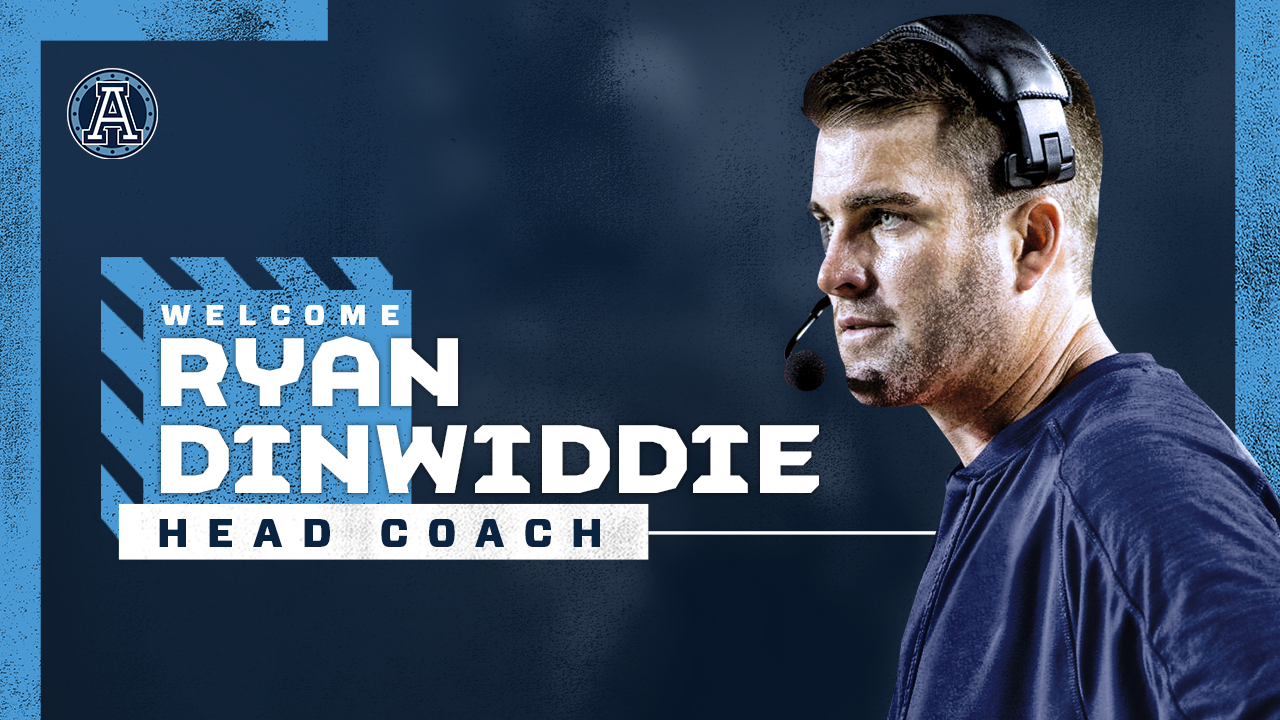 TORONTO – The Toronto Argonauts announced today the club has made a coaching change and appointed Ryan Dinwiddie the 45th head coach in team history. The team also announced Corey Chamblin has been relieved of his duties.

All media are asked to enter through Gate 5 and arrive no later than 10:45 a.m.

Dinwiddie, 39, has been the quarterbacks coach for the Calgary Stampeders the past four seasons (2016-2019) and has been instrumental in developing Bo-Levi Mitchell into a two-time CFL Most Outstanding Player under his tutelage. Under Dinwiddie, Mitchell led the league in touchdown passes twice and finished in the top three in passing yards three out of the four years including leading the league in 2016. The California native also helped Calgary QB Nick Arbuckle blossom into a potential future starting pivot after being pressed into service once Mitchell went down in 2019, throwing for over 2,000 yards and 11 touchdowns in nine games. With Dinwiddie guiding the signal-callers, the Stamps reached the Grey Cup three years in a row (2016-2018), hoisting the trophy 2018.

“Ryan is one of the top young coaching minds in the CFL right now and we welcome him to the MLSE family,” said team President Bill Manning. “We believe he will set the example to establish the type of culture we need for the Argos to be successful.”

Previous to his time in Calgary, Dinwiddie coached in Montreal for three years (2013-2015) in various capacities, including offensive co-coordinator, quarterbacks, offensive quality control and running backs coach. As running backs coach for the Als in 2015, the team led the East in rushing and helped Tyrell Sutton win the league’s rushing crown.

“His exhaustive passion to prepare to win makes him a priority in setting our new culture,” said Argos General Manager Michael Clemons. “The former CFL QB is the son of a coach, smart and hard working with a winning pedigree.”

The former quarterback played five seasons in the CFL, three with Winnipeg (2006-2008) and two with Saskatchewan (2010-2011). Coincidentally, the QB’s first ever CFL start came in Toronto at SkyDome during the 2007 Grey Cup vs Saskatchewan when he was a member of the Bombers. Dinwiddie played college football at Boise State where he is widely considered to be the best quarterback in Broncos history after a record setting career there.

“I am thrilled and honoured to be part of such a historic organization and I am extremely grateful for the opportunity,” said new head coach Ryan Dinwiddie. “Winning Grey Cups are the ultimate goal and I can’t wait to get started.”