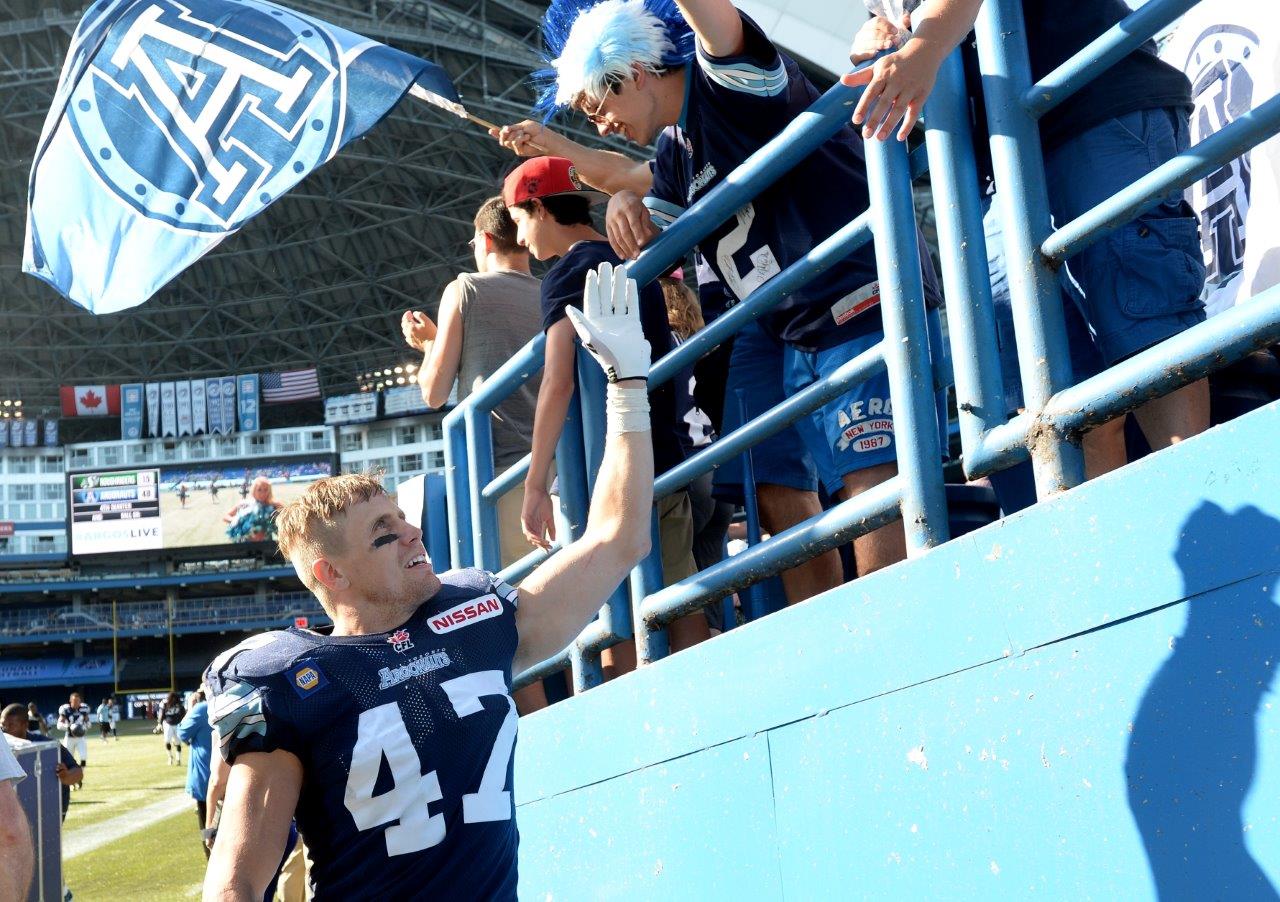 VANCOUVER – During the CFL Awards tonight at the Queen Elizabeth Theatre in Vancouver, B.C., Toronto Argonauts’ LB James Yurichuk was officially presented the trophy as the 2014 Jake Gaudaur Veterans’ Award recipient. Yurichuk is now one of three Argonauts players on the roster to have received the award (Andre Durie in 2011 and Shea Emry in 2013), but just the second player to receive the award while a member of the Double Blue (Durie in 2011).

Yurichuk was selected by a voting committee consisting of representatives from the CFL, Veterans Affairs Canada, TSN, and the Canadian Football Players Association. The award is given annually to a CFL Player who best demonstrates the attributes that have always defined Canada’s veterans: Strength, Perseverance, Courage, Comradeship, and Contribution to Canadian communities.

James Yurichuk commented, “To have my name on a trophy associated with our veterans is a great honour. The character, strength and courage our veterans demonstrated is the benchmark for excellence and makes Canada the proud country that it is. This award is a reflection of family, friends, teammates, teachers and coaches who have affected my life in a positive way – and to them I say thank you. Thank you, as well, to the Toronto Argonauts organization which has been passionate about caring for and improving our community.”

James has become an advocate for youth and female football development, as well as youth wellness. He was recently named the first director for the new Central Canadian Women’s Football League which will begin play in 2015. He has also spoken out about concussion awareness and safe play after one of his teammates, while playing at Bishop’s University, was hospitalized for two years following a serious in-game head injury. A Brampton, Ontario native, he has served as a volunteer coach for the York Lions football program, and is a staunch supporter and spokesperson for TrueSport which is an agency created by the Canadian Centre for Ethics in Sport to help ensure inclusion and fair play amongst athletes. A video message he recorded last year has since become a mandatory part of drug training for all CFL players.

He has demonstrated both emotional and physical strength throughout his career. A two-time CFL Canadian Player of the Week and 2011 Grey Cup champion, he has never missed playing in a football game while in high school, college or in the pros. He played the entire 2010 season (as a member of the B.C. Lions) with a torn patella tendon and has served as a team captain and locker room leader. Yurichuk is the ‘wedge-buster’ on special teams and made his first start at WILL linebacker this past season while in Double Blue. In that start, he made an interception and sealed the win for the Argonauts with a dramatic game-ending sack. James is a committed father and partner, and a dedicated member of the community. A consummate teammate, he works hard to bring the locker room together by organizing team social events (including teammates’ families), coordinating car pools, and treating everyone as a friend and an equal.

Jake Gaudaur was a Canadian hero. He was a fighter pilot instructor during the Second World War as a proud member of the Royal Canadian Air Force and his career with the CFL spanned 45 years as a player, team executive and Commissioner. He was inducted into the Canadian Football Hall of Fame as a Builder in 1984.