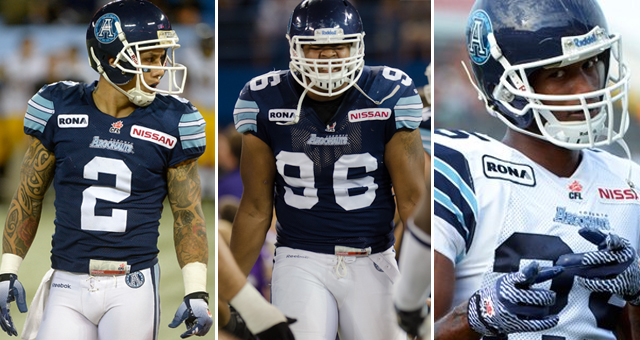 TORONTO – The Toronto Argonauts Football Club is thrilled to announce that East Division Most Outstanding Player WR Chad Owens, DT Armond Armstead and CB Patrick Watkins have all been named East all-stars for their standout performances during the 2012 season.

Owens, who was named the East Division’s Most Outstanding Player on Wednesday, earns his third consecutive division all-star nod, but his first as a receiver. Owens set career-highs on offence and wrapped up the 2012 CFL season leading the league with 1,328 receiving yards.  He also finished second in receptions with 94, just six catches behind league leader Nik Lewis in Calgary. Owens’ best game of 2012 came on one of the biggest stages when the Flyin’ Hawaiian hauled in 11 receptions for 176 and one touchdown, helping lead the Argos to victory in the final Labour Day Classic at Ivor Wynne. In total, he recorded five 100+ yards receiving games and averaged more than 14 yards per catch. He also became the first Argonauts receiver since Derrell “Mookie” Mitchell in 1998 to lead the CFL in receiving yards.

Armond Armstead has been sensational since arriving to Argonauts’ training camp in June. The Sacramento, California native quickly secured a starting position as a 21-year old and went on to play in all 18 regular season games. In his rookie season, Armstead led the Argos’ defensive line in tackles with 43, good for fifth on the team. He also led the Double Blue in quarterback sacks (6), which was also sixth in the entire league in that category. Still just 22 years old at the time of balloting, Armstead is the youngest all-star in either division and was the team’s nominee for Outstanding Rookie.

Cornerback Patrick Watkins, who is also a CFL rookie but a professional football veteran, finished the season tied for the team lead in interceptions with five. At 6-feet, 5-inches, Watkins utilized his size and speed to shutdown most other team’s “big play” threats on a game-to-game basis. In the Labour Day re-match on September 8, Watkins intercepted a pass and ran it back 27 yards into the endzone for his first career CFL touchdown. Watkins also finished third on the Argos’ roster with 67 defensive tackles.

The Division All-Stars were selected by 70 voters, including members of the Football Reporters of Canada (FRC), CFL head coaches, and CFL fans from across the country. The FRC voting panel consists of representation from each CFL market and a national chapter.

East Division Outstanding Player and All-Star, WR/KR Chad Owens will be at the 2012 Gibson’s Finest CFL Player Awards on Thursday, November 22 at Koerner Hall in downtown Toronto.  Tickets for the show are available by emailing events@100thgreycupfestival.ca or by calling (416) 341-ARGO.  Awards show tickets also provide access to the TELUS Players Party at the MTCC which features performances by some of the hottest names in Canadian music including K’naan, Kardinal Offishall, Mia Martina and Kreesha Turner.