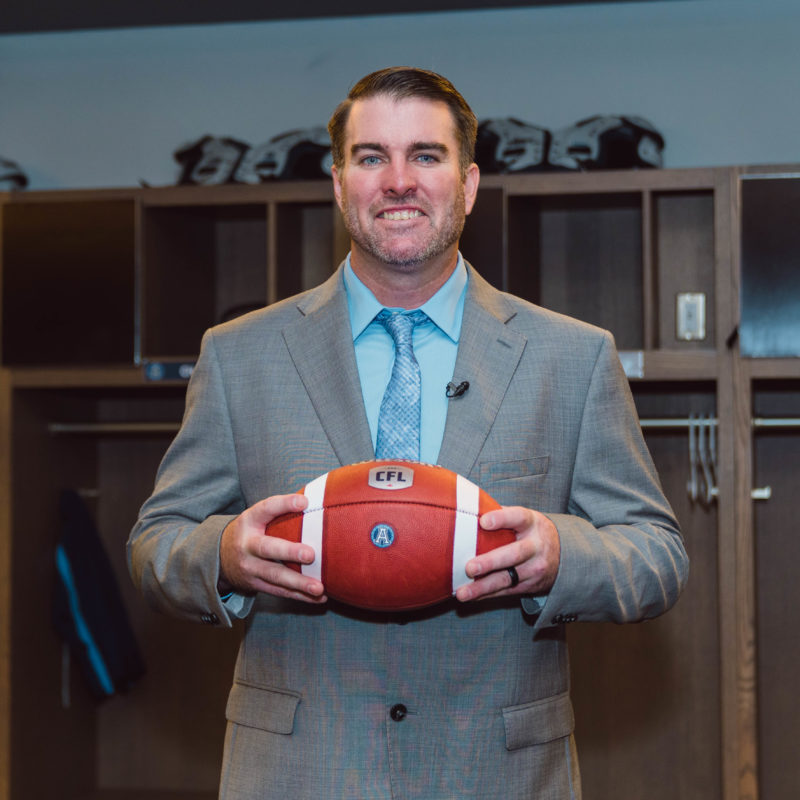 A new era began in Toronto on December 12, 2019 as Ryan Dinwiddie became the 45th head coach in Argonauts history.

In 2021, his first season with the Argos, Dinwiddie led the team to a 9-5 record and first place in the East Division. He would be recognized by being one of the finalists for the CFL Coach of the Year award.

He added the Offensive Coordinator role to his title in January 2022.

The former CFL quarterback joined the Double Blue from Calgary, where he had been the Stampeders quarterbacks coach for the previous four seasons. They reached the Grey Cup three times in that span, winning it in 2018.

Bo Levi Mitchell would be named the league’s Most Outstanding Player twice in those four seasons working with Dinwiddie.

Dinwiddie had coached with the Montreal Alouettes in various capacities between 2013 and 2015. While he was the team’s running backs coach in 2015, Tyrell Sutton led the league in rushing.

A native of Elk Grove, just outside Sacramento, California, Dinwiddie played his NCAA football at Boise State. He was a three-year starter and finished with 9,819 yards and 82 touchdowns against just 21 interceptions. As a senior he threw 31 touchdown passes in 14 games.

He turned pro in 2004, spending a year and a training camp with the Chicago Bears. After his release he played a year in NFL Europe for the Hamburg Sea Devils.

In 2006 he’d move to Canada for the first time, playing three seasons for the Winnipeg Blue Bombers. His first start was under pressure, as it came in the 2007 Grey Cup following an injury to Kevin Glenn the week before. He’d throw for 225 yards and a TD, but also three interceptions in a 23-19 loss to Saskatchewan in Toronto.

His first regular season start took place on July 24 the next season as the Bombers hosted Calgary. He finished with 450 yards passing with one touchdown and no interceptions in a 32-28 win.

Dinwiddie continued his career in 2010 and 2011 with the Riders in a backup capacity before retiring as a player.

The Calgary Stampeders hired him as their quarterbacks coach in 2016 where he really started to have the CFL world take notice of his accomplishments, which led to the Argonauts hiring him as their head coach following the 2019 season.