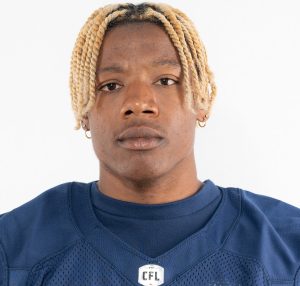 2022: Signed with Toronto Argonauts April 5, released June 5…Signed with Toronto August 9. Played 9 games. Recorded 28 defensive tackles, 4 interceptions, and a sack. Returned an interception 35 yards for a touchdown against Caleb Evans in Ottawa September 24. His first CFL interception came August 20 against off Bo Levi Mitchell. His first CFL sack came August 26 vs. Hamilton against Jalen Morton. Tied for fourth in the CFL with 4 interceptions despite only playing in 9 games. Playoffs: Did not play in Eastern Final win over Montreal due to injury. 109th Grey Cup: Did not play in 24-23 win over Winnipeg due to injury.

2019: Signed with Hamilton May 2. Played one game. Recorded no stats. Made CFL debut November 2 against Toronto. Playoffs: Did not play in Eastern Final win over Edmonton. 107th Grey Cup: Did not play in 33-12 loss to Winnipeg.