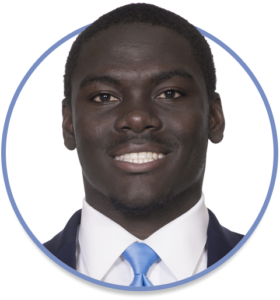 2018: Played in 13 games for Toronto, started all 13. Started season on practice roster, made his CFL debut against Winnipeg on July 21st. Finished the season with 33 tackles and two interceptions. Both interceptions came against Zach Collaros of Saskatchewan on September 22nd, the second of which was returned 62 yards for a touchdown. Named the Argos Most Outstanding Rookie.

College: Played 42 games for the Cardinals. He’d end his NCAA career with 141 tackles, 10 interceptions, 10 tackles for loss, four sacks, three forced fumbles and a pair of fumble recoveries. In his senior season he had an interception return for a 37-yard touchdown against Kent State, and picked off two passes in Louisville’s win over Florida State.

Personal: Attended Killan High School in Miami. Had four interceptions and returned two punts for TDs in his senior season.