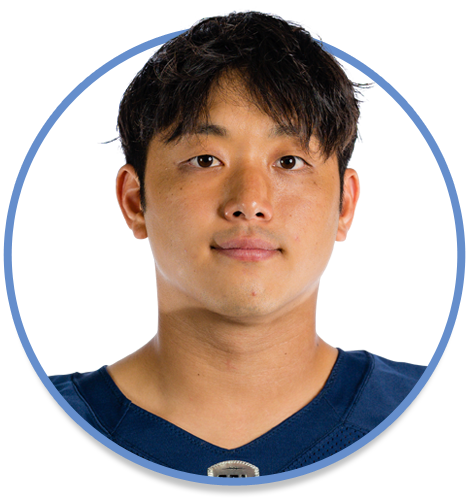 Acquired: Selected in the second round, 16th overall, of the CFL Global Draft.

2021: Played 1 game. Made CFL debut November 16 against Edmonton. Went 0/1 in conversion attempts and did not try a field goal. Punted 9 times for an average of 34.6 yards with a 60-yard single. Playoffs: Did not dress in Eastern Final loss to Hamilton.

2020: Played for the Aviators in the Spring League.

2019:  Played for Austin Generals in the Spring League…Played for IBM Big Blue in X-League Japan. Set a league record with a 58-yard field goal. Named All X-League Japan kicker for the first time.

2017: Advanced to finals of both the spring and fall seasons, losing the championship game each time. Set a league record with a 50-yard FG in the “Japan X-Bowl” championship game. Led league with 15 FGs.

College: Attended Waseda University (2012-15). In 2015 his team advanced to the Koshien Bowl, the country’s national college championship game. In 2014 was 9/9 in field goal attempts with a long of 52 yards.

Personal: Attended Waseda High School. Played three seasons, winning two national championships. Named All-Japan in 2011.  Works with long-time NFL kicker Michael Husted as his coach. Drew interest from both the Cowboys and Raiders prior to being drafted by the Argos.