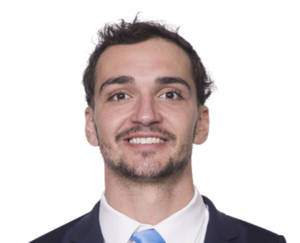 Acquired: Selected in the fifth round, 54th overall, in the 2018 CFL Draft.

2018: Played in 15 games for the Argos in his first CFL season. Made his debut against Edmonton on July 7. Made five special teams tackles. Recorded his first sack at Ottawa on November 2.

College: Played 24 games over four seasons at Michigan State University. Made the Spartans as a walk-on and redshirted. Missed all of 2016 with an Achilles injury. Played all 13 games as a senior. Excelled on all four special teams units.

Personal: His mother, Natalie, was born in Sarnia, giving him National status in the CFL. Attended St. Mary’s Prep in Orchard Lake Michigan, where he played linebacker and tight end. In his senior year he recorded 75 tackles, eight sacks and an interception. Also played hockey for St. Mary’s. Grew up in Commerce Township, just outside of Detroit.