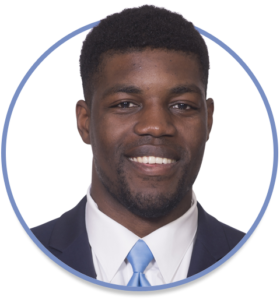 Acquired: Selected in the second round, 18th overall, of the 2018 CFL Draft.

2018: Played in 11 games with the Argos in his rookie CFL season. Made his debut August 18th against B.C. after missing the beginning of the season due to injury. Recorded 15 tackles on special teams.

College: Played 28 games over four seasons at Queen’s University. Recorded 149 tackles, 15.5 tackles for a loss, 9.5 sacks, three interceptions, two forced fumbles and a fumble recovery. Was a First Team All-Canadian and First Team OUA All-Star in 2017. In his final year he had a career-high 48 tackles, four sacks, seven tackles for a loss, three interceptions, one of which he returned for a 61-yard TD against the U-of-T.

Personal: Born in Paris, France. Grew up in the Montreal borough of LaSalle. Attended prep school in Kents Hill, Maine, where at different times he played linebacker, quarterback, receiver and kick returner. Was an avid youth soccer player.