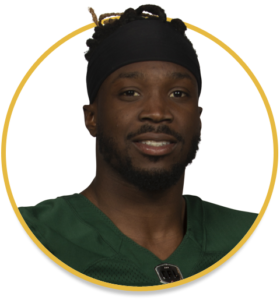 2019: Played 18 games with Edmonton Eskimos. Set career highs with 58 catches, 534 yards and two touchdowns. His first CFL 100-yard game came July 11 at B.C. He caught a 77-yard TD pass from Trevor Harris in that game, finishing with four receptions for 106 yards. Playoffs: Had two catches for 15 yards in win at Montreal in East Semi-Final. Caught four passes for 37 yards in lost at Hamilton in East Final.

2017: Played 18 games. Had no catches.  Playoffs: Played in but had no catches in Edmonton’s West Semi-Final win over Winnipeg, and West Final loss to Calgary.

2016: Played 12 games. Caught six passes for 53 yards. Playoffs: Played in but had no catches in East Semi-Final win over Hamilton, or East Final loss to Ottawa.

2015: Played 16 games with Toronto Argonauts. Had six catches for 63 yards and one touchdown. His first CFL TD catch was a five-yard reception from Trevor Harris July 24 in a win at B.C. Playoffs: Did not play in Argos loss at Hamilton in East Semi-Final.

2013: Selected by the Argonauts in the third round (22nd overall) of the CFL Draft. The Argos traded three fifth-round picks in that draft to Saskatchewan to move up to select Adjei. He returned to the University of Buffalo.

College: Attended University of Buffalo (2012-13). Played nine games. Had just one carry for two yards as a freshman. Broke his ankle in the second game of his senior season and missed the remainder of the year…Attended City College of San Francisco (2010-11). He had 10 catches for 90 yards and a touchdown in his first game as a freshman. Won the Northern California championship in 2010, lost National Championship game in 2011.