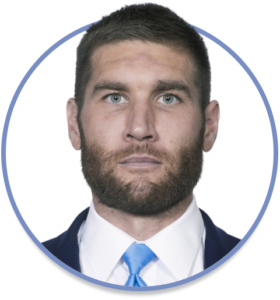 2017: Signed as a free agent by the Argos on May 22. Dressed for six games, seeing action in two. Made his CFL debut vs Montreal on September 23. Was 2-of-2 for 10 yards. Playoffs: Dressed as a backup for East Final vs Saskatchewan. 105th Grey Cup: Dressed as a backup in win over Calgary.

2015: Released by the Miami Dolphins September 5. Re-signed by Dolphins to their practice squad on September 6, released on September 9…Signed by San Francisco 49ers November 23.

College: Started his NCAA career at UCLA in 2007 before transferring to Sacramento State for his final three seasons. Finished his college career 136/252 for 1,615 yards and eight TDs. Rushed for two additional touchdowns.

Personal: Attended San Francisco’s Balboa High School where he played football, basketball and baseball. He was the city’s Football Player of the Year in 2006 and its Back of the Year in 2005. In 2004 and 2005 he led his team to the Turkey Bowl title, the city’s annual championship played Thanksgiving Day. He is the grandson of 1948 Olympic gold medalist Wilbur “Moose” Thompson, who won the shot put event.