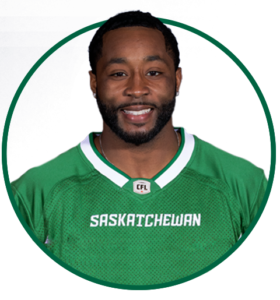 2019: Played 18 games with Saskatchewan Roughriders. Carried the ball 41 times for 201 yards and three touchdowns. Caught 19 passes for 161 yards and one touchdown. Used as a returner, highlighted by a 100-yard kickoff return for a touchdown July 20 against B.C.  Playoffs: Retuned 6 punts for 70 yards in West Final against Winnipeg.

2017: Signed with Saskatchewan August 12. Played two games, scoring one rushing and one receiving touchdown. Playoffs: Had 15 carries for 169 yards including a 75-yard TD in win at Ottawa in East Semi-Final. Held to 34 yards rushing and 16 yards receiving in East Final loss at Toronto.

2013: Played 16 games with Miami. Caught eight passes for 97 yards, including his first NFL receiving touchdown, a game-winning 15-yarder from Ryan Tannehill late in the fourth quarter in an upset in over New England. Used as Miami’s primary returner.

2012: Signed with Miami January 11. Played 16 games. Had one catch and one carry, used primarily as a returner where he scored two touchdowns; a 72-yard punt return against Houston in his first NFL game on September 12, then a 96-yarder against Buffalo November 15.

2011: Played 17 games for Hamilton Tiger Cats. Had 382 receiving yards with two touchdowns and 82 rushing yards with one TD. Scored one TD on a kick return that year, a 118-yarder against Calgary at Moncton September 25. Playoffs: Had 56 yards rushing, including a 50-yard TD in overtime win at Montreal in East Semi-Final. Had four catches for 30 yards in East Final loss at Winnipeg.

2010: Released by Saskatchewan Roughriders June 23…Signed with Hamilton June 26. Played 18 games. Returned a punt 93 yards for a TD in his first CFL game July 2 at Winnipeg. He also returned a missed field goal 118 yards for a TD that game. For the season he had 234 rushing yards with two touchdowns and 234 receiving yards with one TD. His receiving TD came on his first CFL catch July 10 against Calgary, a 33-yarder from Kevin Glenn. He returned a punt 93 yards for a TD earlier in that game, his second straight game with a 93-yard TD. Scored two touchdowns on kickoff returns that year, one on a punt return and two on missed field goal returns. He became the first player in CFL history to score touchdowns five different ways in the same season. Named Hamilton’s and the East Division’s Most Outstanding Special Teams Player. Playoffs: Had two carries for 13 yards in East Semi-Final loss to Toronto.

College: Attended Indiana University (2004-2008). Played 47 games. Redshirted as a freshman. Became the first Hoosier to finished with 1,000 rushing, receiving, and return yards. Against Michigan State he became the first player in school history to have a rushing TD and a receiving TD each over 75 yards. Named the team’s Offensive Player of the Year as a senior. As a sophomore was named an All-American as he led the NCAA with a 30.1-yard kickoff return average. Also ran track. Was sixth in the 100m at the Big Ten Outdoor Championship. Ran on IU’s 4 X 100-metre relay team.

Personal: Attended Mumford High School in Detroit. As a senior led the Detroit Public School League with 1,785 rushing yards and 20 touchdowns. Won the Michigan state championship in the 100m.