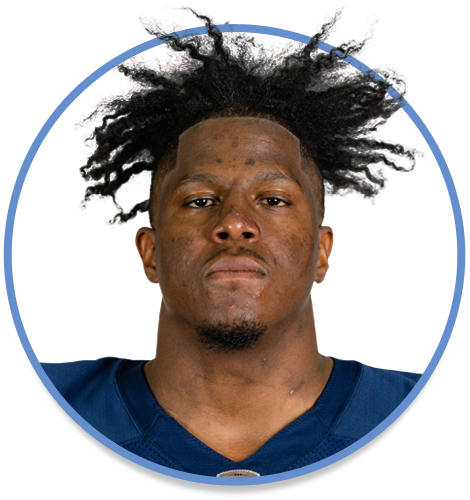 2020: Played 5 games for Houston Roughnecks (XFL). Had 9 tackles and a half sack before the league ceased operations.

2017: Traded by Carolina Panthers to New England Patriots March 10 along with a third-round pick (#72) in exchange for a second-round pick (#64). Waived by New England August 26…Signed with New York Jets August 27. Played 15 games. Recorded 14 tackles, 1 sack and an interception.

2015: Played 16 games with Carolina. Recorded 32 tackles, 5 tackles for loss, 5 sacks, 3 forced fumbles, and recovered 2 fumbles. Playoffs: Had 3 tackles in win over Arizona in NFC Championship Game. Super Bowl 50: Had 4 tackles, 3 sacks, a forced fumble, a fumble recovery and an interception in a 24-10 loss to Denver. The interception of Payton Manning was his first in the NFL.

2014: Selected by the Carolina Panthers in the second round, 60th overall, in the NFL Draft. Played 15 games. Recorded 12 tackles, 3 tackles for loss, 4 sacks and a forced fumble. Made his NFL debut September 21 against Pittsburgh. His first NFL sack was against Russell Wilson on October 26 against Seattle.  Playoffs: Had 1 tackle in NFC Wild Card win against Arizona. Had 3 tackles in NFC Divisional Playoff loss at Seattle.

College: Attended the University Missouri (2010-13). Played 39 games. Redshirted as a freshman. Recorded career 96 tackles, 13.5 sacks, 28 tackles for loss, and forced 6 fumbles. Scored a touchdown against Indiana on a 49-yard interception return. Voted All-SEC in his junior year. Entered the NFL draft after his junior season.

Personal: Attended New Madrid High School. Played football, basketball and was on the track and field team. Played both ways in football. As a senior he amassed 104 tackles, 31 tackles for loss, 12.5 sacks and blocked 4 kicks. Caught 22 passes for 501 yards and 3 TDs in his junior year. Was All-State in both football and basketball as a senior.