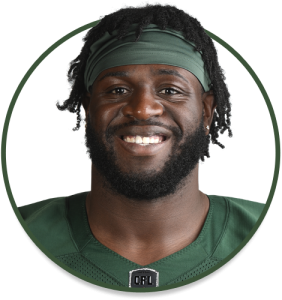 2018: Signed as an undrafted free agent with the Houston Texans. Released September 1.

College: Attended the University of Maryland for five years (2013-17). Redshirted as a freshman due to a shoulder injury. Played in 36 games, starting 24. In his junior year he recovered a fumble in double overtime in a game against UCF that led to a Terrapins win. He was a teammate of Argo DB Will Likely for four seasons.

Personal: Attended Mandarin High School in Jacksonville, Florida. Recorded 10 sacks in his senior season. Played in Florida’s North-South Classic. His parents are both from Nigeria.