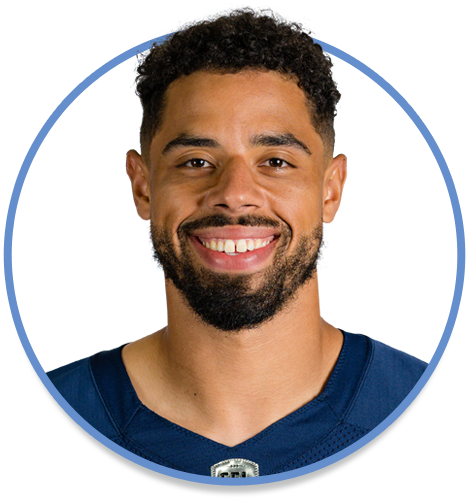 2021: Played 5 games with Toronto Argonauts. Caught 5 passes for 44 yards. His first catch as an Argo was a 9-yard touchdown pass from McLeod Bethel-Thompson August 7 at Calgary. Suffered a knee injury in Week Two that sidelined him for most of the season. Playoffs: Had 4 catches for 46 yards in Eastern Final loss to Hamilton.

2019: Played 4 games with Calgary Stampeders. Caught 11 passes for 168 yards and 3 touchdowns. Injured in game 4 and missed the remainder of the season. Playoffs: Did not play in Western Semi-Final loss to Winnipeg due to injury.

2018: Played 18 games with Calgary. Caught a career-high 35 passes for 567 yards and 3 touchdowns. TSN recognized his remarkable one-handed catch against Hamilton as 2018’s best catch of the year. His first CFL TD catch was a 10-yarder from Bo Levi Mitchell at Ottawa July 12. Playoffs: Had no catches in Western Final win over Winnipeg. 106th Grey Cup: Had 5 catches for 35 yards in 27-16 win over Ottawa.

2016: Selected by Calgary in the second round, 15th overall, in the 2016 CFL Draft. Played 7 games. Caught 4 passes for 51 yards. His first CFL catch came on July 8 in Ottawa, an 11-yard reception of a Bo Levi Mitchell pass. Playoffs. Had no catches in Western final against B.C. 104th Grey Cup: Had no catches in loss to Ottawa.

College: Attended Northern Illinois University (2011-15). Played 50 games. Caught 6 TD passes in each of his sophomore and junior seasons. Finished career with 99 catches for 1,465 yards. His career high was a 121-yard game against Toledo in his sophomore year. Redshirted as a freshman.

Personal: Attended Culver Academy in Culver, Indiana for grades 11 and 12. Named All-State. Set school records with 70 catches, 1,314 yards and 19 TD catches despite only playing there for 2 seasons…Attended Loyola Catholic Secondary School in Mississauga for grades 9 and 10. Also played basketball and was scouted by several NCAA programs.