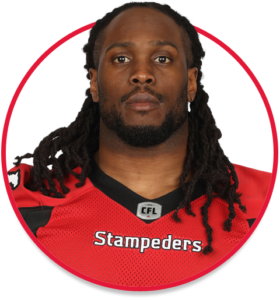 2018
(Calgary) After being limited to a total of 13 games in the previous two seasons due to injuries, Turner played all 18 regular-season contests including four starts at defensive tackle. He recorded 21 tackles including one tackle for loss and established a new career high with four sacks. Turner also had one fumble recovery. He played his 100th career regular-season game in Week 16 against Toronto. Turner also played in both post-season games, recording two tackles in each contest and sacking Ottawa quarterback Trevor Harris on the final play of the Stamps’ Grey Cup victory.

2017
(Calgary) Turner played four games including three starts and had five tackles, one sack, two QB pressures and one knockdown. He made his season debut in Week 9 against BC and recorded a pair of tackles and a sack. Turner finished the season on the six-game injury list.

2016
(Calgary) Turner started nine games and had 14 tackles including two sacks and two tackles for loss. He also had a knockdown. Turner started the Western Final and recorded three tackles and also started in the Grey Cup, registering one tackle. In the Labour Day rematch, he played on the offensive line for the last few minutes of regulation and in overtime to fill in for injured players. He began the season on the six-game injury list before being activated for Game 4 and was transferred back to the six-game injury list before Game 13.

2014
(Calgary) Turner played 14 games (seven starts) and had 33 tackles, three tackles for a loss of four yards, three sacks, two knockdowns, a fumble recovery and one special-teams tackle. He began the season on the one-game injury list before getting back in the lineup for Game 3. He was on the reserve list for Games 5 and 17. Turner played in the Western Final and recorded a tackle and a knockdown. He also played in the Grey Cup and registered five tackles.

2013
(Calgary) Turner played 13 games and had 20 defensive tackles and a quarterback sack. He was on the injured list for Games 11-15. He also played in the Western Final and recorded four tackles.

2012
(Calgary) Turner played 11 regular-season games as well as the West Division semifinal, the West Division final and the Grey Cup. The Bishop’s University product saw action both at defensive end and defensive tackle and recorded 11 tackles and one sack during the regular season. His season high in tackles was four and came on Sept. 28 against Edmonton. Turner’s sack was recorded on July 12 against Montreal. He added one tackle in the playoffs.

2011
(Calgary) In his rookie season, Turner played in all 18 regular-season games as well as the West semifinal. Turner added much-needed non-import depth playing on the defensive line and contributing on special teams as he tallied 27 tackles, two sacks, two special-teams tackles, and forced one fumble. Turner’s sacks came in back-to-back games to close out the season, on Oct. 30 at Montreal and Nov. 5 against Winnipeg.

College
Turner played nine games for Bishop’s during the 2010 season and recorded 19 solo tackles and 17 assisted tackles. He also had five tackles for loss and 1.5 sacks along with three pass break-ups and one forced fumble. In 2009, he led Bishop’s with 6.5 tackles for loss, recorded a sack and a forced fumble and returned an interception 39 yards for a touchdown.

Personal
Turner is an active participant in PinkPower, the Stamps’ program to raise funds for the battle against women’s cancers. His cousin Steven Turner was a teammate at Bishop’s and was drafted by the Toronto Argonauts in 2010.