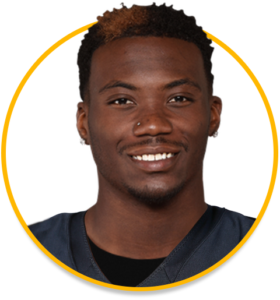 2019: Played five games for Hamilton Tiger-Cats. Recorded five defensive and five special teams tackles. All five tackles were in the regular season finale against Toronto. Playoffs: Did not dress. 107th Grey Cup: Did not dress.

2017: Signed with Atlanta Falcons as an undrafted free agent May 1, waived August 30…Signed with Denver December 20.

Personal: Attended Martin Luther King Jr. High School in Lithonia, Georgia. A receiver, in his senior year he got into one play at safety in the regular season, then played three playoff games there. Returned an interception 68 yards for a TD on his first play at safety. He ended up getting multiple major D-1 offers to play that position. Three-time state champion in the 110m hurdles.