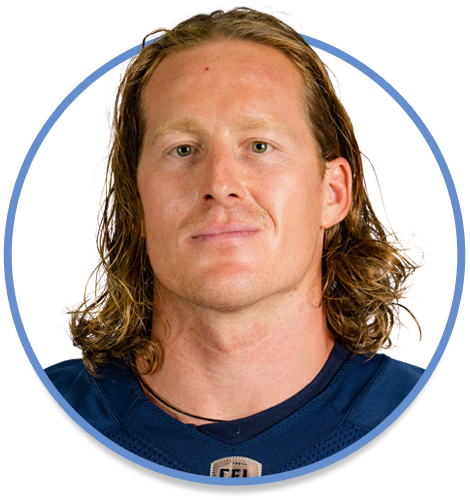 2019: Played in 12 games with Toronto. Injured during warmup of the season opener but still played the game. Was then placed on the six-game injured list, snapping his consecutive games streak at 91, 94 including playoffs. Played his 100th CFL game at Montreal October 18. Recorded 1 defensive, and 1 special teams tackle.

2018: Played all 18 games with Toronto. Finished with a career high 11 special teams tackles.

College: Played 5 seasons at the University of Guelph. Made 124 tackles as a linebacker. Had 24 special teams tackles, an interception, 2 sacks, 2 forced fumbles and 2 fumble recoveries. In a memorable 42-39 overtime win over Queen’s in the 2012 Yates Cup Semi-Final he had 12.5 tackles, forced a fumble and recovered a fumble for a TD. Won the Tom Dimitroff Award in 2011 as the team’s Defensive Player of the Year. Was a USPORTS Academic All-Canadian in 2011. Was named the Gryphons top special teams player in 2010.

Personal: Made the switch from quarterback to linebacker at Guelph Collegiate. Played football and rugby there. His younger brother Job was drafted by the Calgary Stampeders in 2019.