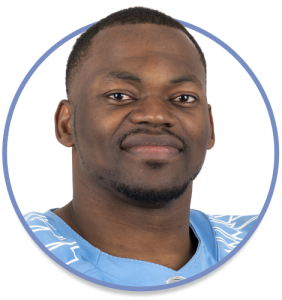 2013: Played 18 games. Made 92 defensive tackles, adding 19 on special teams. His 111 total tackles tied for the league lead. Had one interception, his first in the CFL, against Darian Durant September 1 at Saskatchewan. Voted Winnipeg’s Most Outstanding Player, Most Outstanding Defensive Player and Most Outstanding Canadian. Named CFL and Divisional All-Star.

2011: Selected by the Winnipeg Blue Bombers in the first round, first overall, of the CFL Draft. Played 11 games. Had 15 tackles, all on special teams. Forced one fumble, recovered one fumble. Made CFL debut August 26 against Hamilton. Scored a touchdown after recovering a blocked punt and returning it 52 yards September 30 against Montreal. Playoffs: Had no stats in East Final win over Hamilton. 99th Grey Cup: Had one special teams tackle in loss to B.C.

Personal: Attended Father Michael Goetz Secondary School in Mississauga. Born in Kinshasa, but grew up in Montreal, then Mississauga. His brothers Cauchy and Kelvin also had CFL experience. Henoc played with Cauchy in Montreal and Kelvin in Saskatchewan.