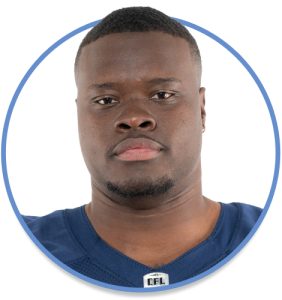 2021: Played 3 games, started all 3. Left during training camp, then re-joined the team in time for the October 11 game in Hamilton. Finished the season with no stats. Playoffs: Missed Eastern Final loss to Hamilton due to injury.

2017: Selected by Montreal in the second round, 12th overall, in the CFL Draft. Played 4 games. Recorded 4 tackles. Made CFL debut October 9 vs. Edmonton.

College: Attended McMaster University (2013-16). Played 25 regular season games. In his senior season he had 4 sacks and 8 tackles for loss in 8 games. Played in the 2014 Vanier Cup, a loss to Montreal.

Personal: Attended Thistletown Collegiate Institute in Rexdale. The school’s program was founded through the Argos “Level the Playing Field” initiative. At one point he played running back in high school. Also involved in soccer, basketball, baseball, and track and field. Moved to Toronto from Jamaica at age 11.