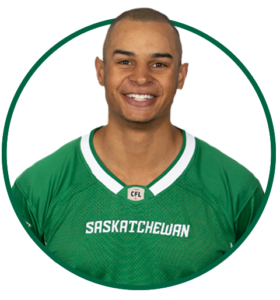 2018: Played one game. Recorded one special teams tackle. Injured in season opener and forced to miss the rest of the year.

2017: Selected by Montreal Alouettes in the sixth round, 48th overall, in the CFL Draft…Traded to Saskatchewan Roughriders for OT Matt Vonk June 7. Played 18 games. Recorded two defensive and 24 special teams tackles. That led the Riders in ST tackles and was fourth in the CFL. Playoffs: Had one special team tackle in East Semi-Final win at Ottawa. Had no stats in East Final loss at Toronto.

College: Attended the University of Calgary (2014-16). Played 18 games. Was a receiver, defensive back and kick returner. Led the conference in kick returns in 2016. Had three kickoff returns and one tackle in 2016 Vanier Cup loss to Laval.