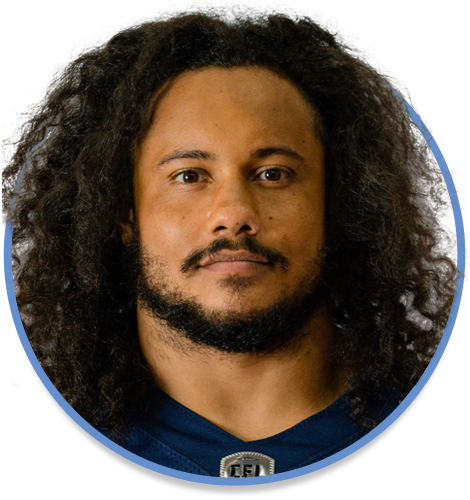 Acquired: Selected in the fourth round, 27th overall, in the 2016 CFL Draft.

2019: Played 12 games with Toronto. Injured in the second game of the season and missed the next 6. Caught 9 passes for 58 yards.

2018: Started all 18 games with Toronto. Caught 30 passes for 242 yards and a pair of touchdowns. Set a career high with 55 receiving yards against B.C. on October 6th.

2017: Played in all 18 games with Toronto. Had a career year with 36 catches for 366 yards and 5 TDs. Playoffs: Caught 1 pass for 15 yards in Eastern Final against the Roughriders. 105th Grey Cup: Made 5 catches for 36 yards including a pair of two-point conversions in a 27-24 win over Calgary.

2016: Played in all 18 games with Toronto. Caught 2 passes for 17 yards, adding a half-dozen tackles on special teams. The Oakville native made his CFL debut Week One against Hamilton. His first CFL catch was a 5-yard reception from Ricky Ray in the Labour Day Classic in Hamilton on September 5.

Personal: Attended Holy Trinity Secondary School in Oakville, Ontario. Is highly active with the Argos in the community during the off-season.