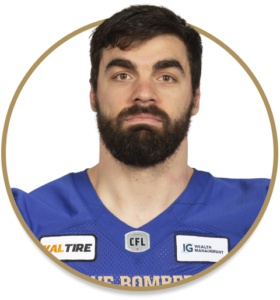 Roh proved to be a reliable and durable addition for the Bombers, suiting up for all 18 games in his first season in Winnipeg while leading the club with eight quarterback sacks. Roh finished the year with 30 defensive tackles, adding two pass knockdowns, two tackles for a loss while recovering one fumble.
In 62 CFL games spread out over three seasons with the Bombers and B.C. Lions Roh, nicknamed ‘Death Roh’, has registered 28 sacks.

Signed as a free agent with the Bombers after a 2017 season in which he led the Lions with seven and in quarterback pressures in 15. Had a season-high two sacks against Hamilton on September 22 and three pressures vs. the Ticats on July 15. Added three tackles for a loss, tied for second among B.C. defenders. Dressed for 16 games, all starts.

Joined the Lions in 2015 after signing as an undrafted free agent with the Carolina Panthers in 2013. Played and started in 13 games in his rookie year with the Lions, registering six sacks and adding 24 tackles. Started 16 games in 2016, finishing with seven sacks, one forced fumble and two knockdowns.

Highly recruited out of Arizona, Roh settled on Michigan and started immediately as a freshman in 2009 and was named to The Sporting News Freshman All-Big Ten team. Named to the All-Big Ten second team in 2012 and won the Richard Katcher Award as Michigan’s best defensive lineman. Was also named to the Academic All-Big Ten team.