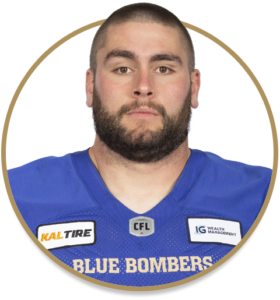 2018: Played two games. Made his CFL debut September 8th against Saskatchewan in the annual “Banjo Bowl.”

2017: Signed with Winnipeg May 19 as an undrafted free agent. Released June 18 and returned to McMaster for fifth season.

College: Attended McMaster University (2012-17). Redshirted as a freshman. Played five seasons across the offensive line, finishing his career at centre. Won the Yates Cup and Mitchell Bowl in 2012 and 2014, lost in the Vanier Cup final in each of those years. Played in 2016 East-West Bowl.