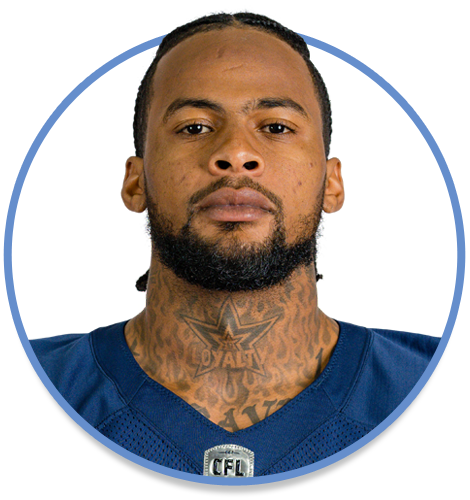 2021: Released by San Francisco 49ers May 5…Signed with Toronto Argonauts June 2. Played 14 games. Finished with 38 tackles, 1 special teams tackle, 3 sacks, and 3 interceptions, 2 of which were returned for touchdowns. He returned a Caleb Evans pass 82 yards for a touchdown against Ottawa on October 6, and returned a Jeremiah Masoli pass 78 yards for a touchdown against Hamilton on November 12. Led the CFL with 162 yards on interceptions. Playoffs: Had 6 tackles in Eastern Final loss to Hamilton.

2019: Signed with B.C. February 12. Played 18 games. Recorded 50 tackles with a sack, an interception and 2 forced fumbles. His first CFL sack came in Toronto July 6 against McLeod Bethel-Thompson. He also recorded a forced fumble in that same game.

2017: Played 17 games with Edmonton. Recorded 14 defensive tackles, 4 special-teams tackles, and an interception. Made CFL debut June 24 at B.C. His first CFL interception came against Drew Willy at Montreal on October 9 and resulted in a 73-yard return for a touchdown. Playoffs: Recorded no stats in either the Western Semi-Final win at Winnipeg, or the Western Final loss at Calgary.

2016: Signed with Oakland Raiders as an undrafted free agent May 16, waived August 29.