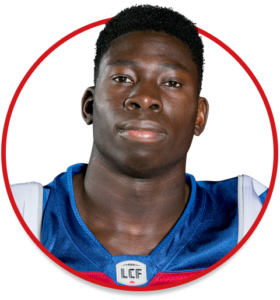 2019: Signed with Montreal Alouettes July 8. Played 10 games. Made 40 tackles including two on special teams. Playoffs: Made five tackles in loss to Edmonton in East Semi-Final.

2018: Played 13 games with Montreal. Finished with 38 tackles and two interception. His first CFL interception came against Trevor Harris of Ottawa on August 11, he returned it 37 yards for a touchdown…Traded to Ottawa Redblacks October 10th for a second-round pick in the 2019 CFL Draft. Played three games. Had eight tackles. Playoffs: Had no stats in East Final win over Hamilton. 106th Grey Cup: Had no stats in loss to Calgary.

2015: Selected by Montreal Alouettes in the first round, fourth overall, in the 2015 CFL Draft. Played 15 games. Recorded 12 tackles including five on special teams. Had one sack and one forced fumble.  Had all seven defensive tackles, the sack and the forced fumble against Saskatchewan in the season finale.

College: Attended Wilfrid Laurier University (2011-14). Played 36 games.  Finished with 152 tackles, five sacks, two interceptions, one forced fumble and two fumble recoveries. Was Laurier’s Outstanding Rookie in 2011, an OUA All-Star in 2013 and 2014, and a First Team All-Canadian in 2014. Was inducted into the Golden Hawks Hall of Fame in 2019.

Personal: Attended Preston High School in Cambridge. Was a member of the football, basketball, rugby, and track teams.