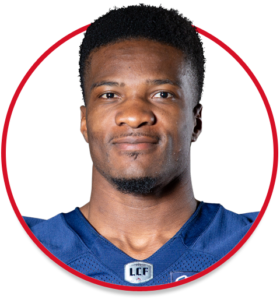 Acquired: Acquired from Montreal January 31, 2020 in exchange for a conditional eighth-round pick in the 2020 CFL Draft.

2018: Released by San Francisco 49ers April 30. Signed with B.C. Lions May 8. Played 18 games. Recorded a career-high 87 tackles, including 16 tackles on special teams. Also had four sacks, two interceptions and one forced fumble. His first CFL interception was against Dominique Davis at Ottawa on September 7. He returned it 50 yards but did not score. Playoffs: Had two tackles in loss to Hamilton in East Semi-Final.

2016: Played 18 games with the B.C. Lions. Finished with 20 tackles, including 11 on special teams. Playoffs: Had two tackles, one on special teams, in West Semi-Final win over Winnipeg. Had no stats in West Final loss at Calgary.

Personal: Attended St. Joseph Secondary School in Mississauga. First name is Boseko. Born in the Congo, but moved to Montreal at age six, then to Abbotsford, B.C.  Attended W. J. Mouat Secondary School in Abbotsford. Played both ways and rushed for 1,556 yards with 22 TDs, while picking off four passes…Played prep football at South Eugene High School in Oregon. Scout.com named him the No. 10 ranked middle linebacker prospect in the United States.