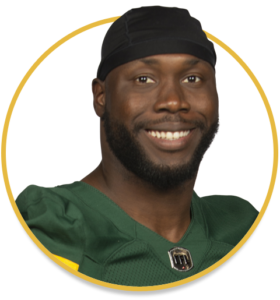 2019: Played seven games for Edmonton Eskimos. Recorded 11 tackles with two sacks. Playoffs: Had no stats in East Semi-Final win at Montreal or in the East Final loss in Hamilton.

2018: Signed with Edmonton February 13. Played 18 games. Had 39 tackles with eight sacks and one forced fumble.

2016: Played 18 games. Had 31 tackles with a career-high 11 sacks and one forced fumble. Named West Division All-Star. Playoffs: Had two tackles in West Semi-Final win over Winnipeg. Had three tackles in West Final loss at Calgary.

2014: Signed with Cleveland Browns as an undrafted free agent May 11…Signed with B.C. May 20. Played 17 games. Recorded 36 tackles with 10 sacks and a forced fumble. His first CFL sack came against Montreal on July 19. Playoffs: Had two tackles and a sack in East Semi-Final loss at Montreal.

Personal: Attended Northwood High School. Played linebacker and running back. Was born in Liberia and moved to the U.S. when he was five.