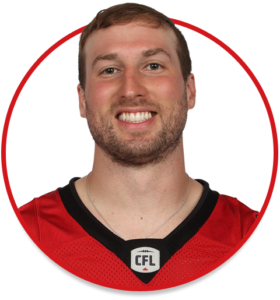 2015: Played 15 games. Led team with 13 special teams tackles. Scored a touchdown July 18 against Winnipeg after recovering a blocked Lirim Hajrullahu punt and returning it 10 yards to the end zone. Playoffs: Played in but recorded no stats in the Western Semi-Final win over B.C., or the Western Final loss at Edmonton.

College: Attended Laval University (2010-13). Played 30 regular-season games. Went to the Vanier Cup in all four of his seasons with the Rouge et Or, winning three times, losing the other in double overtime. He caught a 33-yard TD pass in the first overtime to force the second OT in the loss to McMaster. Played receiver for his first three seasons before converting to defensive back. Had 23 catches for 230 yards and a touchdown. Recorded 16 tackles, one sack, three tackles for loss, two forced fumbles and had one fumble recovery. Also returned punts. Ran the fastest 40-yard dash at the CFL Combine (4.45 seconds). Played in East West Bowl and scored a touchdown on a punt return.