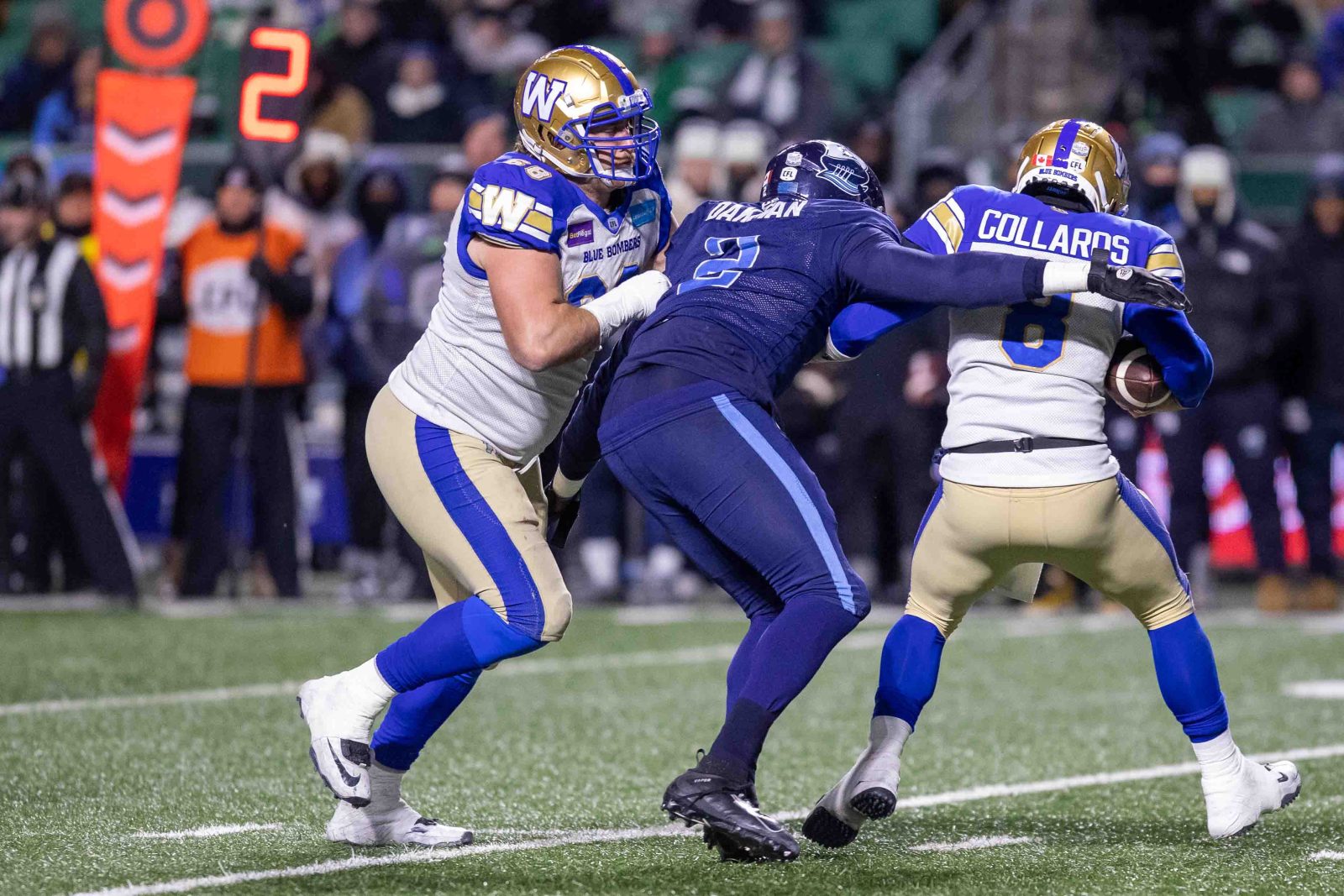 That was some kind of adventure that Robbie Smith went through to cap a wild win for the Toronto Argonauts in the 109th Grey Cup.

The high of winning the game with a third down sack on Winnipeg quarterback Zach Collaros was short-lived, when a yellow flag came flying out seconds later.

The Argos were leading the defending champion Blue Bombers by a single, scrawny point with under two minutes to play when the third-year defensive lineman out of Wilfred Laurier coralled Collaros and brought him to the turf at the Winnipeg 16-yard line.

Game over, really. Until that flag came out.

“I was heartbroken,” said Smith, in the midst of the din of the Argos’ locker room. “When the flag came out I kind of figured. I felt that I grazed it (Collaros’ face mask) but I didn’t think it would get called.”

At that point, a turnover on downs, with the Argos scrimmaging deep in Winnipeg territory, instead became a first and ten for the Blue Bombers on their 41-yard line. Smith did not let his broken heart slow him down, however, as Winnipeg began to drive the ball into field goal range, and a chance to snatch victory from the jaws of defeat.

“We were just focused. What’s the next thing we gotta do? We were still focused on winning the game.”

And in an incredible dramatic twist, Smith got redemption for the penalty that gave the Blue Bombers a chance to grab a field goal and with it, their third straight Grey Cup win.

Four plays after Smith’s negated sack, it was the Brampton, Ontario native who came through, elevating at the line of scrimmage and getting just enough of the ball after Winnipeg kicker Marc Liegghio had swung though on a 47-yard attempt, deflecting the ball, and giving the Argos possession with less than a minute to play. And when I say he got just enough, I mean just enough.

“I feel like it just grazed the top of my fingers,” said Smith. All of them? I asked. “I don’t know,” he replied, laughing. “I think just the tallest one.”

“I just sold out,” Smith went on, describing his effort. “I figured this is the last opportunity, right? So I just sold out, to try and make a play. And then I feel it graze my fingers and the rest is history.”

Smith had a busy final few minutes in the Argos’ victory. Prior to the sack on Collaros that didn’t count, he had one that did on the previous play. And when the Bombers were driving, post-penalty, it was Smith who stopped running back Brady Oliveira on a first-and-ten play from the Toronto 45, holding the gain to five yards when it appeared Oliveira was about to break it for something bigger.

Linebacker Chris Edwards then knocked down a second-and-five pass attempt by Collaros, setting the stage for Smith’s heroics.

“I tried to get inside, over the long snapper,” explained Smith, “because that was the ball point. And I just tried to get as tall as possible and get my hand on it. And it ended up working.”

Smith’s big play will go down as the one that won the Grey Cup for Toronto in 2022, in some sense. In a large sense, really. But he didn’t care to talk about it in those terms, though he is eager to see how it played out for himself, when he finally gets to see a replay.

When I told him he could be seen as the Grey Cup hero by many Toronto fans, he waved me off and said “no, no. That’s Henoc (Muamba).”

“It was a team effort, obviously,” Smith said, motioning towards his raucous, champagne and beer-soaked teammates. “So we all contributed. I’m just glad it ended up working out like that.”

Smith enjoyed a very good season with the Argos, as a player who would rotate in on the defensive line and occasionally get the lion’s share of the reps when injuries befell his D-line teammates. With 22 tackles, three sacks, a forced fumble and an interception, Smith also contributed greatly on special teams with seven tackles.

“I have a lot of great teammates,” he said. “Guys like Kurleigh (Gittens Jr.), guys like Sam (Acheampong). Guys that I played with since college. They kept motivating me through the ups and downs. They really helped me a lot through the season.”

And now Smith has a ring to show for the work and the all the ups and downs, including the dramatic swings that characterized his final two minutes of the 109th Grey Cup game. Perhaps he’ll wear it on the finger that changed the trajectory of a ball and a championship.