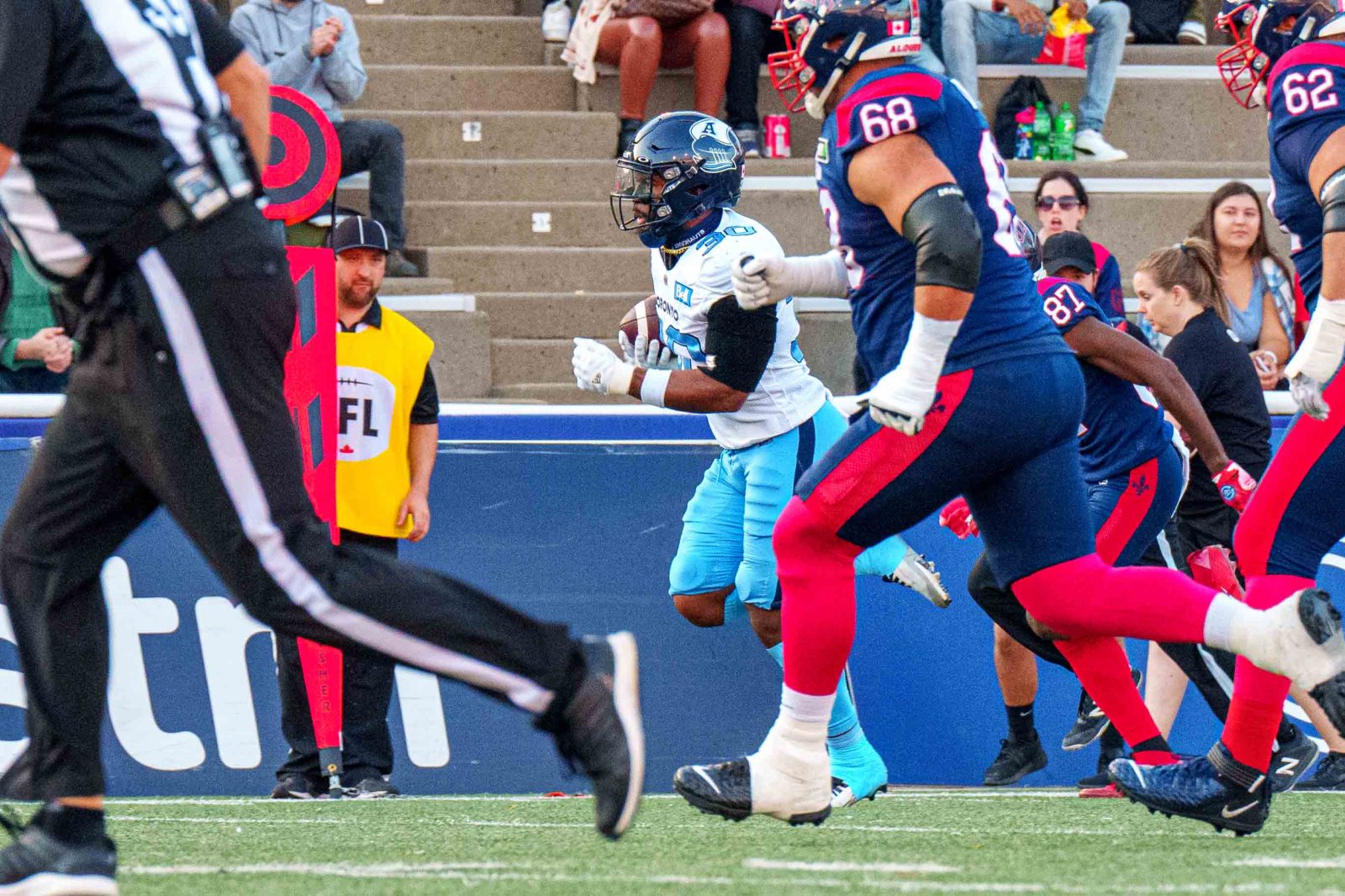 It was just two weeks ago that Jonathan Jones received an unexpected request; at least to him.

The Toronto Argonauts linebacker, filling in for the injured Wynton McManis, was asked to do an interview with a member of the media. His reply said everything you need to know about his mindset.

“Why do they want me? I haven’t done anything.”

In the two games since that request (and subsequent article), Jones has been, shall we say, interview worthy. The weakside linebacker recorded an enormous sack in the final three minutes of the Argos win in Edmonton, then followed it up with a red-zone interception on the opening drive of their East Division-clinching win in Montreal last Saturday.

“I do feel a bit of confidence,” he said, reflecting on his interview hesitancy a fortnight earlier. “I’m grateful, but there’s so much more to take from me for sure. (Defensive Coordinator) Coach Mace said it best, ‘We clinched number one in the East, but we haven’t won the East.’ A lot hay is still to be put in the barn. We’re not satisfied.”

Jones’ route to the CFL was a circuitous one, though not unique. He started out in a huge program, playing mostly special teams during his three seasons at Notre Dame. The Ocoee, Florida native then transferred to Toledo for two seasons and took full advantage of getting back on the field, recording 97 tackles in his senior year.

A couple of weeks shy of his 25th birthday, the 5’11”, 230-pound linebacker is entering his physical prime, but he now must wait for the mental side of being a newbie to the Canadian game to catch up.

“That last game (in Montreal), I felt pretty relaxed,” Jones told Argonauts.ca. “I would say the game plan we have right now is very solid. It took all of this season, and these last three games to really listen to Henoc (Muamba) and Wynton who said this is a different brand of football, you’ve got to slow it down a little bit, you’d got to pay attention to different things a little bit more. I think it’s coming along.”

His two fellow linebackers were right; this is a different brand of football. Some American players find difficulty in the move, while others look at the enormous potential presented by the Canadian rules and the size of the field.

Jones says there’s one aspect of his game that is coming along nicely in this new situation.

He did get to go after the quarterback on one play, thinking he had Trevor Harris for the sack; but at the last possible second the QB flipped the ball to an unsuspecting Walter Fletcher, who took it 59 yards downfield.

It was the Argos first defensive play after Jones’ interception and 40-yard return; which was followed by a two-and-out offensively.

“I was so tired that play,” said Jones. “Coming up on the quarterback, I just grabbed him and I didn’t have enough to finish. But it was a good play by him to get rid of it.”

Jones is still learning more and more about the CFL daily. Among those helping him the most is McManis, the man that he’s been replacing.

“He’s been tremendous. He’s been a great supporter. Every time I come back to the sideline he’ll at least ask me how I’m feeling, then give me pointers where he can. Just his presence in general is great motivation.”

The Argos are thrilled with Jones contributions; not only on defence, but he’s been an outstanding player on special teams. Replacing one of, if not the best defensive player in the league is not an easy task, but it’s one that Jones has done at an extremely high level.