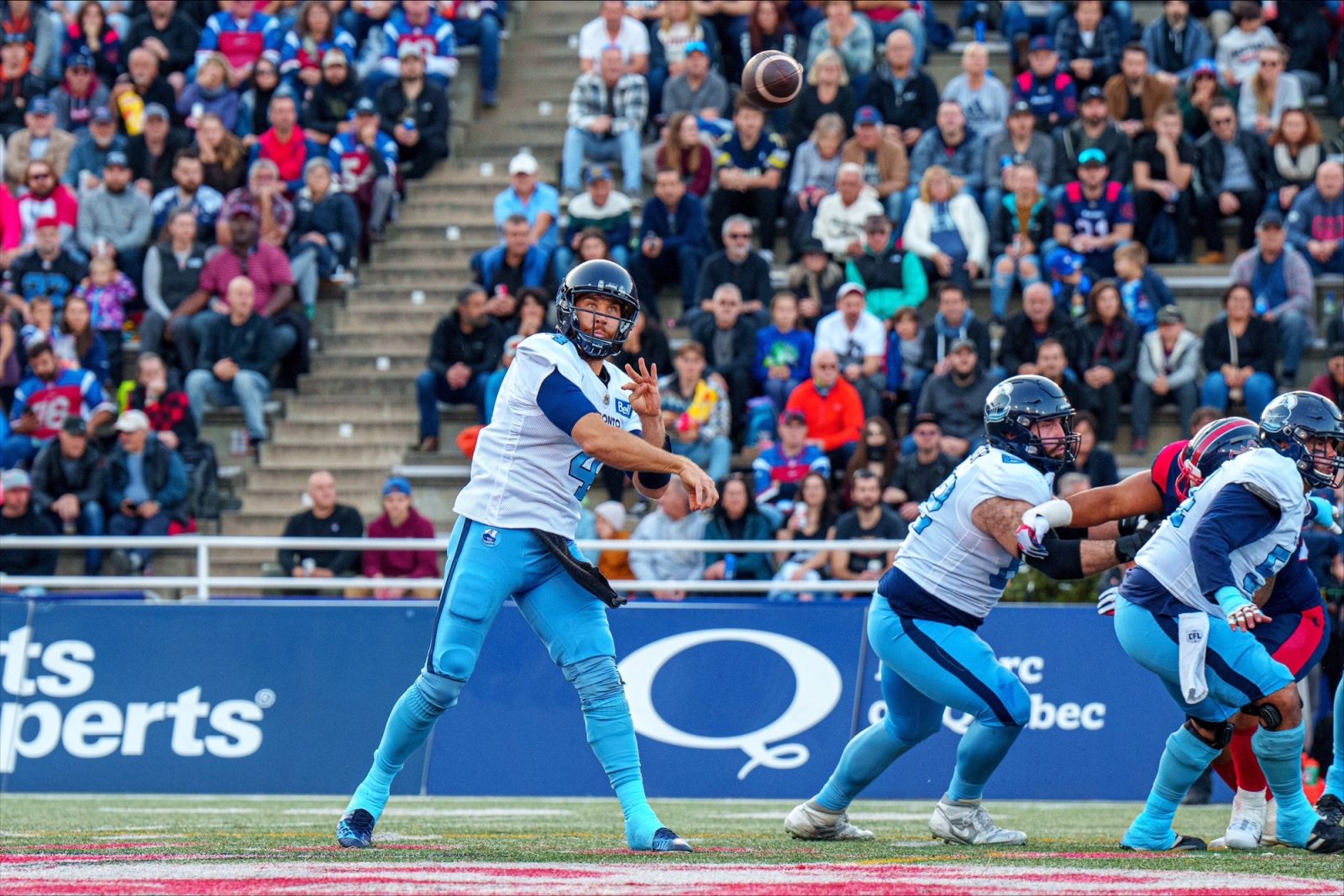 The plane ride home from Montreal went as expected, for the most part.

After winning a nail biter over the Als on a last-second rouge, the Toronto Argonauts were returning home with an East Division regular season title in hand. There was a celebratory aspect with some music playing and some singing at the back of the plane, while at the front of the charter there was some quiet conversation, while others grabbed a quick nap.

One player treated the ride home a little differently. Before the plane had reached peak altitude, quarterback McLeod Bethel Thompson left the party zone and found an empty seat on the aisle.

When he sat down in seat 10C, he opened his laptop to look at a cut up of video from the game. Within a few seconds, offensive tackle Dejon Allen was watching from the window seat next to his QB. Running back A.J. Ouellette leaned in from his seat across the aisle, while a quartet of receivers; Brandon Banks, Markeith Ambles, DaVaris Daniels and Kurleigh Gittens Jr., either stood in their spots behind Bethel-Thompson, or stood in the aisle.

Though just a matter of minutes after clinching a home game in the Eastern Final, the group knew there was much work to be done. The seven players spent the majority of the 70-minute flight watching a game they had just competed in; breaking down each play and discussing the keys to why it worked, or why it didn’t.

This is how championship teams are made.

Holding an in-flight video session is the norm for the man who will win the CFL’s passing title this season, regardless of whether or not he plays next Saturday in a game that has become inconsequential in the standings.

“The whole point is that you play football to find the best version of yourself,” Bethel-Thompson told Argonauts.ca after the flight was over. “I know tonight was not the best version of myself. I feel like I played timidly early. I missed a throw I could have been more aggressive on, and then right in the middle after I blamed myself for that, I was too aggressive and threw an interception.”

“I know that to get to where we need to go we’ve taken one step,” he continued. “To take the next two steps it will take me playing better. Today is a great celebration, but it means nothing without two more wins.”

That’s how the San Francisco native rolls. There was no mention of his work on the game winning drive; throwing a perfect out to Gittens for 12 yards, hitting the check down to Oullette for a dozen more, or delivering the 15-yard strike to Daniels to set up the game-winning kick.

Three plays, totaling 39 yards, in just 25 seconds to move into kicker Boris Bede’s range. It was surgical precision in the most pressure-filled scenario imaginable; the dying seconds of a tie game in the stadium of a tough opponent with a first-round bye on the line.

M B-T and company met the challenge and the result is the chance to host the Eastern Final on October 13 at BMO Field. For Dejon Allen, the win caps an amazing week. On October 15, he and his girlfriend welcomed their first child to the world. Baby Sahara has been on his mind all week.

“I have a picture of my daughter as the wallpaper on my phone, so I kept looking at her,” said the proud papa to Argonauts.ca. “It’s made me think about life a lot more; preparing myself for her and also made me more accountable to her.”

One can assume that despite the obvious joy he’s experienced this week, his newborn wasn’t at the top of the right tackle’s mind during an incredibly intense game, especially during the game-winning drive.

“It boosts our confidence a lot,” he said of that drive. “We’re all confident in what we do. It just takes time to develop an o-line and the offense together. (The win) means a lot. It gives us some time to prepare for the Eastern Final. It means so much to the team.”

The offence had a few highlight moments against a stingy Montreal defence; the game-winning drive, a 39-yard TD pass from M B-T to Gittens, who made a remarkable adjustment to the ball, and a 109-yard touchdown drive following a goal-line stand where the Argos denied the Als after a first-and-goal from the four-yard line.

There were also several big moments for the defence; underscored by the goal line stand and a key interception by Jonathan Jones at the Argos 10-yard line on the Alouettes first possession.

The defence is still a work in progress. Corey Mace is in his first season as defensive coordinator, while there is only one defensive player still on the Argos roster from 2019, an astronomical turnover in talent.

The Brampton native was the ninth-overall pick in that year’s CFL Draft. He’s still young by CFL standards, but enough of a veteran to realize how important the win and bye week are in the big picture.

“It was huge,” he told Argonauts.ca. “It gives us time to rest, especially guys that are hurt. Whoever is banged up or dealing with injuries now get the bye week, plus they’ll now maybe only have to play a quarter or rest the entire game (next week against Montreal). It’s huge for us.”

Smith says the defence has developed a knack for coming up with a big play at a key moment, evidenced by the goal line stand which forced the Als to concede a safety in the third quarter, or the pick by Jones.

Jones has filled in at weakside linebacker for the injured Wynton McManis, who had been playing at an exceptionally high level. Big cleats to fill for sure, but Smith says the rookie has done a fantastic job.

I think Wynton was on track to win Defensive Player of the Year,” said Smith. “Those are big shoes to fill, but J.J. came in with the mindset of getting better, watching film, and preparing like a pro. Obviously you see that on the film today. A big shout out to J.J., that was a huge pick and it was a great way to start the game and give us momentum for our offence. It was huge.”

The Argos roster is filled with playmakers on both sides of the ball. It’s become the M.O. of this team; to win games by making game-changing plays at the key moment. Each week it seems to be somebody different that gives them that boost.

The Argos are anxious to see which player or players will step into that role in the Eastern Final at BMO Field on November 13 against either the Alouettes or Hamilton Tiger-Cats.