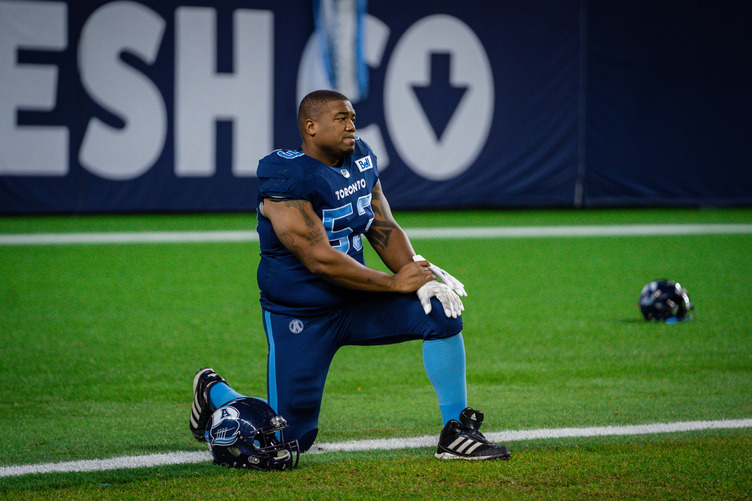 On the surface it doesn’t make a lot of sense.

Toronto Argonauts Philip Blake and Dariusz Bladek don’t seem to have a lot in common, but the pair has developed a friendship that transcends the locker room.

Both are guards by trade; with Blake manning the left side, Bladek the right. That alignment has been altered over the last few games as injuries have forced Blake to line up at left tackle.

Their position is where the similarities seem to end. Bladek has an extremely outgoing personality, while Blake is much more reserved. At 36 years old, Blake is married with three kids, while the 28-year-old Bladek is single. The Blake family lives outside of Dallas, Texas, while Bladek spends the off-season in Florida.

However, if there’s one thing that’s even tougher to find than “Pinball” Clemons cursing, it’s spotting either Blake or Bladek without the other one being right next to him.

When leaving the locker room for practice or returning after it’s over, they‘re together. Standing on the sidelines at practice, they’re next to each other. They’ll be in line for lunch together, they’ll sit and watch film together when lunch is over.

It’s not just at work either. With Blake’s family back in Texas, the pair live together in Toronto and room together on the road.

The pair migrated – together naturally – to Toronto from Saskatchewan, where they were teammates for a year-and-a-half and developed their friendship. The Argos became beneficiaries of that bond when the pair became free agents.

Blake, who attended Father Henry Carr Secondary School and played for the Etobicoke Eagles as a youngster, wanted to finish his career where it started.

He and Bladek talked about taking the next step in their pro careers together.

“Not during the season, but during the off-season,” said Blake. “I knew I wanted to come here because it’s my hometown and I wanted to play my last years here. I asked him, ‘What are you thinking?’ and he said, ‘I’m going to come to Toronto.’ That was a plus for me coming here.”

Bladek was as excited to move to Toronto as Blake was to return home.

“When Sask moved on and we were coming here, that was a huge thing,” said Bladek. “We talked about it a bunch. If (Toronto) worked out, we knew what kind of things and culture we could bring here and what we could do for the organization and for each other.”

The jovial nature of the friendship was in full display over the course of their conversation with Argonauts.ca. That didn’t mean that once in a while one of the players didn’t become a bit more serious.

“He’s a great person,” Blake said of Bladek. “He keeps me humble. I’m away from my family, so he’s my family. When I’m down he keeps me up, he’s good energy for me. Having a roommate who creates that positive energy makes it easier for me being here.”

Blake arrived in Saskatchewan via a trade with Montreal in October 2018. Bladek says the friendship started immediately upon the veteran’s arrival in Regina.

Football is obviously the main topic of discussion when the two are at work, but what’s it like at Casa Blake-dek in the evenings? Do they take work home with them?

“We’ll play video games,” said Blake. “We’ll find a movie on Netflix or we’ll just walk down to a pub and have dinner there.”

This reply led to the most important question of the interview; one that addresses a dilemma that can be the most challenging issue a family or roommates face.

Do they agree when choosing a movie on Netflix? 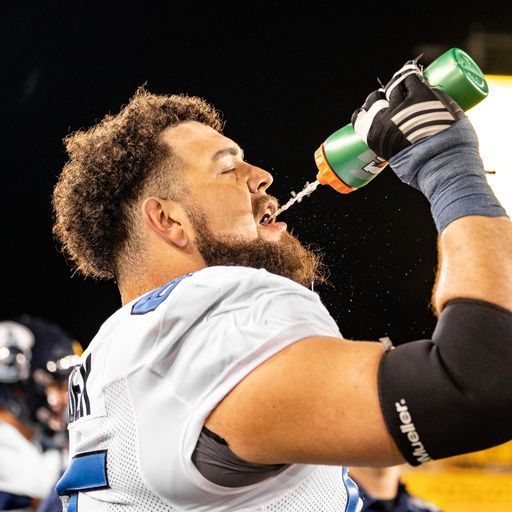 Just when it seemed the conversation was about to conclude, and after a dozen or so big laughs during that time, it was Bladek’s turn to be serious when speaking about his friend and mentor.

“I’ve been fortunate enough in my career to have people in my life who are older that I can learn things from. I want to room with people older than me so I can learn more. To see everything that Phil does with his family, I can’t wait ‘til I have that one day.”