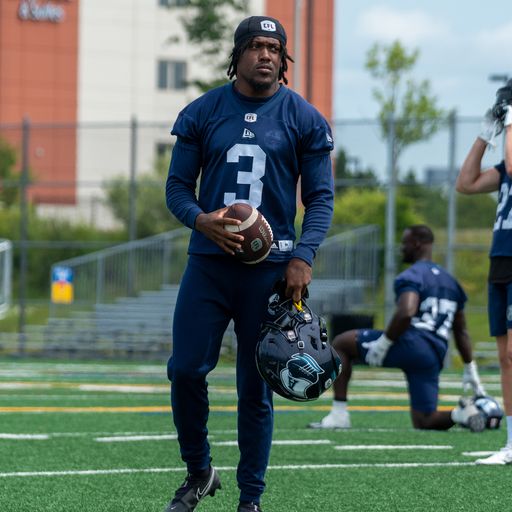 His arrival in Toronto was much like a stealth bomber. Jamal Peters flew in from the U.S. delta country via the Indianapolis Colts; almost completely undetected, with only a few people outside the organization noticing him at all.

“I kind of like it like that,” the starting boundary corner told Argonauts.ca. “I’ve always been underrated, all my life. I like being the under the radar type of guy.”

This year has been different. He’s become more of an F-15 fighter jet; noticed immediately and arriving at his destination with ill intentions.

Physically, the Bassfield, Mississippi native is the complete package; fast, long, strong, and possessing one characteristic that makes his defensive backs coach break into an ear-to-ear smile.

“He’s big,” Josh Bell said, with a huge emphasis on the second word. “He’s a beast. You see a young, blossoming football player. He’s hungry and learning, getting more knowledge of the game. He’s learning to be elite and dominating every single time he plays the game. Every time he steps on the field, he’s getting better.”

Despite his physical gifts, the road to his early success with the Argos has been anything smooth. In his senior year at Mississippi State he suffered a serious knee injury, tearing his MCL and his PCL. He was worried that he may never play the game again.

Peters worked hard to rehab the injury and it paid off with a brief stint with the Indianapolis Colts. When that didn’t work out, he turned his attention to the Argos. His arrival at training camp in 2021 was low key, but his performance was not. He was making plays on a daily basis and had the opportunity to start. He made an impact early, highlighted by an end-zone interception against Zach Collaros in Winnipeg in Week Two.

Peters suffered another significant knee injury last year. He would miss the majority of the second half of the season, missing weeks 11-17.

Peters confessed to Argonauts.ca he was fearful that his second chance at football would be his last; that the injury was going to strip him of his opportunity to prove to the football world how talented he is. 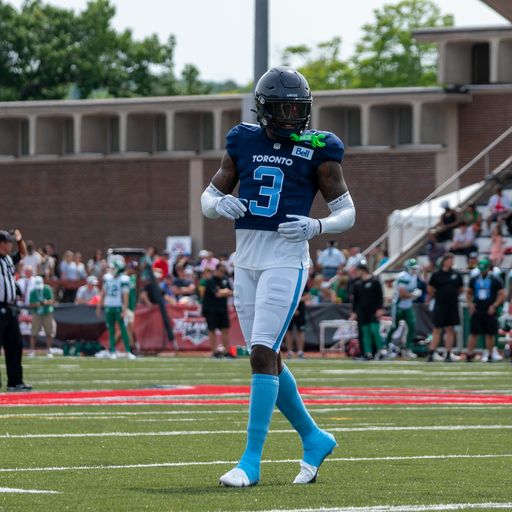 “When you get hurt in professional football you never know what’s next. I was down on myself; I didn’t know if I was going to play again. I missed the majority of the season once I got hurt. My adversity (his earlier knee injury) helped me. The mindset that I had; I was good. My main thing was to get back healthy and get back on the field and help my team win.”

His return has been a blessing for the Boatmen. Peters’ skillset is now being equaled by his increasing knowledge of the Canadian game. It’s something that’s been very noticeable to his positional coach.

“He’s very raw,” Bell explained, before once again emphasizing his size. “He’s 6’3”, 210 pounds as a corner. He’s from the mud in Mississippi. He’s a football player and that’s the first thing that you love about him; he’s a team-first guy, he’s all about the room. That’s what you love about him; you trust him to be on the field and continue to learn as he’s playing.”

Bell then caught himself and pivoted toward another element of Peters’ game that the coach definitely wanted to highlight.

“Man, the physicality. He set the tempo with our physicality last week. It was an amazing thing. Petey’s going to throw his body in there. That’s what you love about him, he’s not 6’3”, 210 for nothing; he’s actually willing to put all that on the line every single time it’s time to hit somebody.”

Peters concurs with his coach, saying he’s become much more comfortable not only with his surroundings and the game itself, but with his now veteran status on the team.

“When I’m the new guy I try to soak everything in. Coming in this year, I talked with coach Bell a lot during the off-season and he told me I should be more vocal as a Year Two guy. The stuff that I know I feel like I can share, and I can help the veterans plus the rookies that we have. It’s a role that I look forward to.”

It’s tough to watch an Argos game now and not notice No. 3. After missing the season opener he’s recorded 15 tackles in five games. He had an interception in the end zone against Winnipeg in Week Five, then last week against Saskatchewan he recorded a sack and also had a couple of huge hits; one coming at the goal line against running back Jamal Morrow, who amazingly held on to the ball.

When asked which feeling is best for him, a sack, an interception or a bone-jarring hit, Peters gave an answer that may surprise many.

“I’ll go with the sack,” he said after thinking about it for a few seconds. “The sack is different. I haven’t had a sack since my freshman year at Mississippi State (before last week). It was actually a good moment; to turn around and see my guys celebrating with me, that was a different feeling. When you catch a pick, it’s a good feeling, but there ain’t nothing like a sack.”

That response plays perfectly into the way the Argos played last week. There was something different; an intense physicality that every player on the unit brought to the field.

“I felt it for sure,” said Peters. “Having Chris (Edwards) back (after missing the first three games due to suspension) really was a thing that we were missing from the defence. When you bring him back it really makes us all lock in. We expect greatness once we hit the field; we feel like we’re a great defence, and once we set the tone, we’ll be hard to stop.”

Peters will look to set the tone again on Sunday night in Regina; whether it be with an interception, a hard hit, or his favourite – a sack.