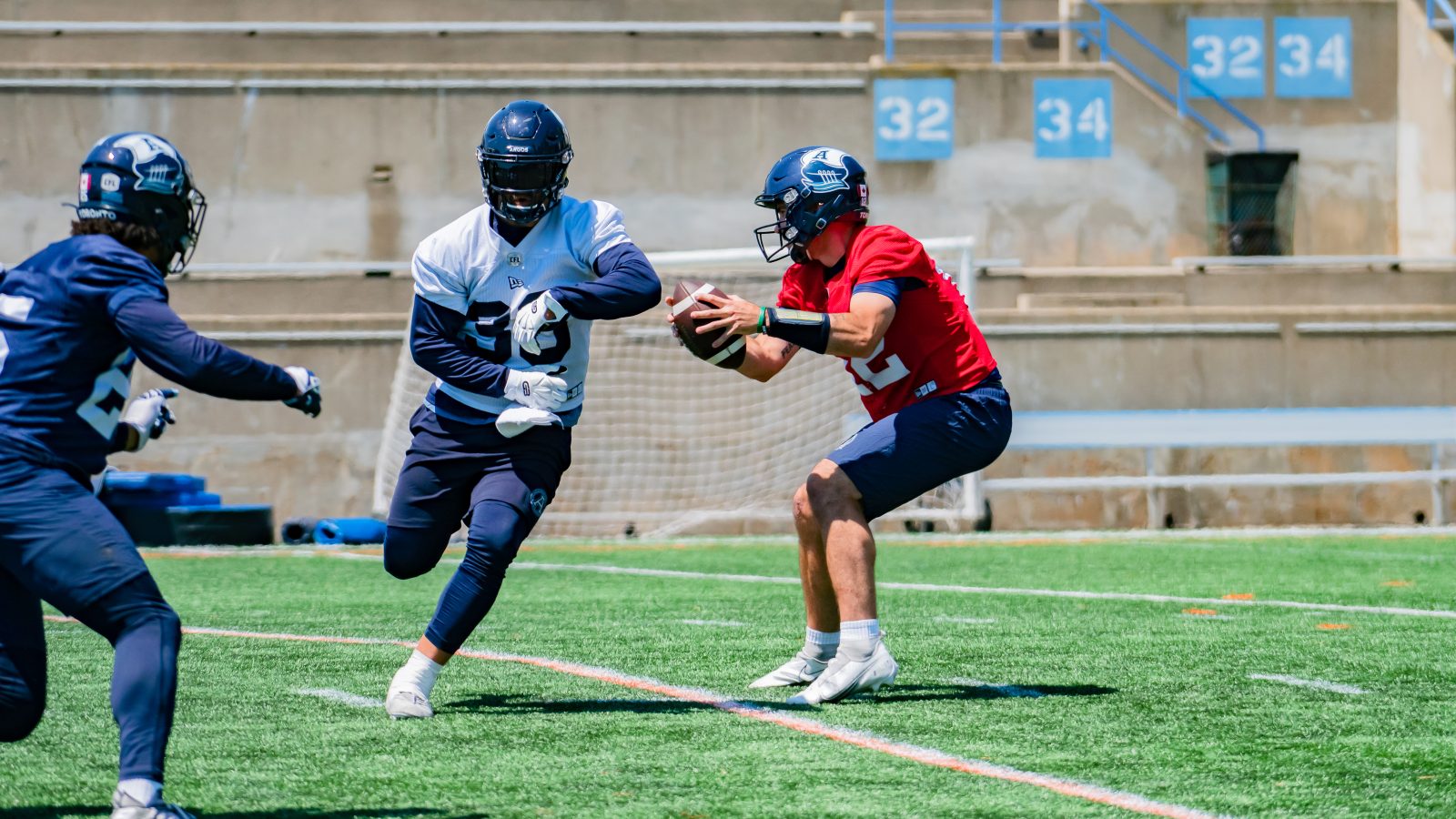 The off-season is now over. Players have been drafted or signed as free agents, training camp is in the books, two pre-season games were played, and the final cuts have been made.

The end result is your 2022 Toronto Argonauts.

The roster is set, though it’s unlikely it will look this way when the season is over. Injuries will happen, and the front office is always on the lookout to upgrade the talent level.

With that said, Argonauts.ca wanted to introduce you to this year’s team, starting with the offence.

Any mystery about what the Argos quarterback room would look like was solved when the team released Antonio Pipkin following the pre-season game in Ottawa. The three QBs to crack the roster are McLeod Bethel-Thompson, Chad Kelly and Austin Simmons.

Bethel-Thompson is the starter. The strong-armed Californian had a solid camp and is coming off a season where he was named an East Division all-star despite not starting every game. He has a lot of talent to work with and has a boatload of intangibles that he brings to the position.

Kelly slides in as QB2. He showed why the personnel department is thrilled that he opted to sign in Toronto. The physical skills are in place, the former Ole Miss star just needs to learn the speed and nuances of the CFL, which will obviously take some time.

The third quarterback will be Austin Simmons. It’s his first year in pro football and of the three he has the most to learn. He’s mobile and has a strong arm. The South Dakota product is penciled in as the short-yardage QB to start the season.

The Argos made a huge splash on the first day of free agency when they signed one of the best backs in CFL history. Andrew Harris brings talent, experience and a downhill running style that has the coaching staff excited. Harris finished fifth in the league in rushing last season despite missing 7 of 14 games due to injury. His 5.4 yards per rush was tied for second among backs with 100 or more carries.

The team has the ability to make the position a Canadian spot due to the emergence of Dan Adeboboye. The 15th overall selection in this year’s CFL Draft did not look like a rookie in camp and gives the team some flexibility in its allocation of Canadian starters.

The powerful A.J. Oullette returns for a third season in Double Blue, while Javon Leake also made the team. Leake is not only talented but versatile, as the Maryland product is also a dangerous returner.

The starting fullback will be fan favourite Declan Cross, back for a sixth season in Toronto. His backup will be Joe Carbone, who signed as a free agent after finishing his university career with the Windsor Lancers.

This is arguably the team’s strong point in terms of talent and depth.

The depth of Canadian talent may mean the Argos could at some point opt to use Juwan Brescacin or Dejon Brissett in the starting group; or one of the American starters could be pushed by newcomers A.J. Richardson, Isaiah Wright, Earnest Edwards, Damonte Coxie, or second-year Argo Cam Phillips.

The team will move away from the four-Canadian offensive line it used in 2021, opting to start just three Nationals this season.

The change will come at right tackle, where Dejon Allen takes over after spending last year on the left side for the injured Isiah Cage. Cage is back and looks to solidify the group on Bethel-Thompson’s blind side.

The three interior spots will be manned by Canadians. With Peter Nicastro, the team’s top lineman and top rookie from last year starting the season on the injured list, free-agent acquisition Justin Lawrence will start at centre. He’ll be flanked by Dariusz Bladek at right guard and Philip Blake at left guard.

The other Canadians include Shane Richards, Gregor MacKellar and Theren Churchill – all first-round draft picks – as well as Dylan Giffen and Jonathan Zamora. The backup tackles will be newcomer Kofi Appiah and Trevon Tate.

It’s a solid group that sees a multitude of big play athletes across the board. Fans will get a first look at this offence on June 16th when the Montreal Alouettes visit BMO Field with a kickoff time of 7:30. For tickets visit Argonauts.ca.