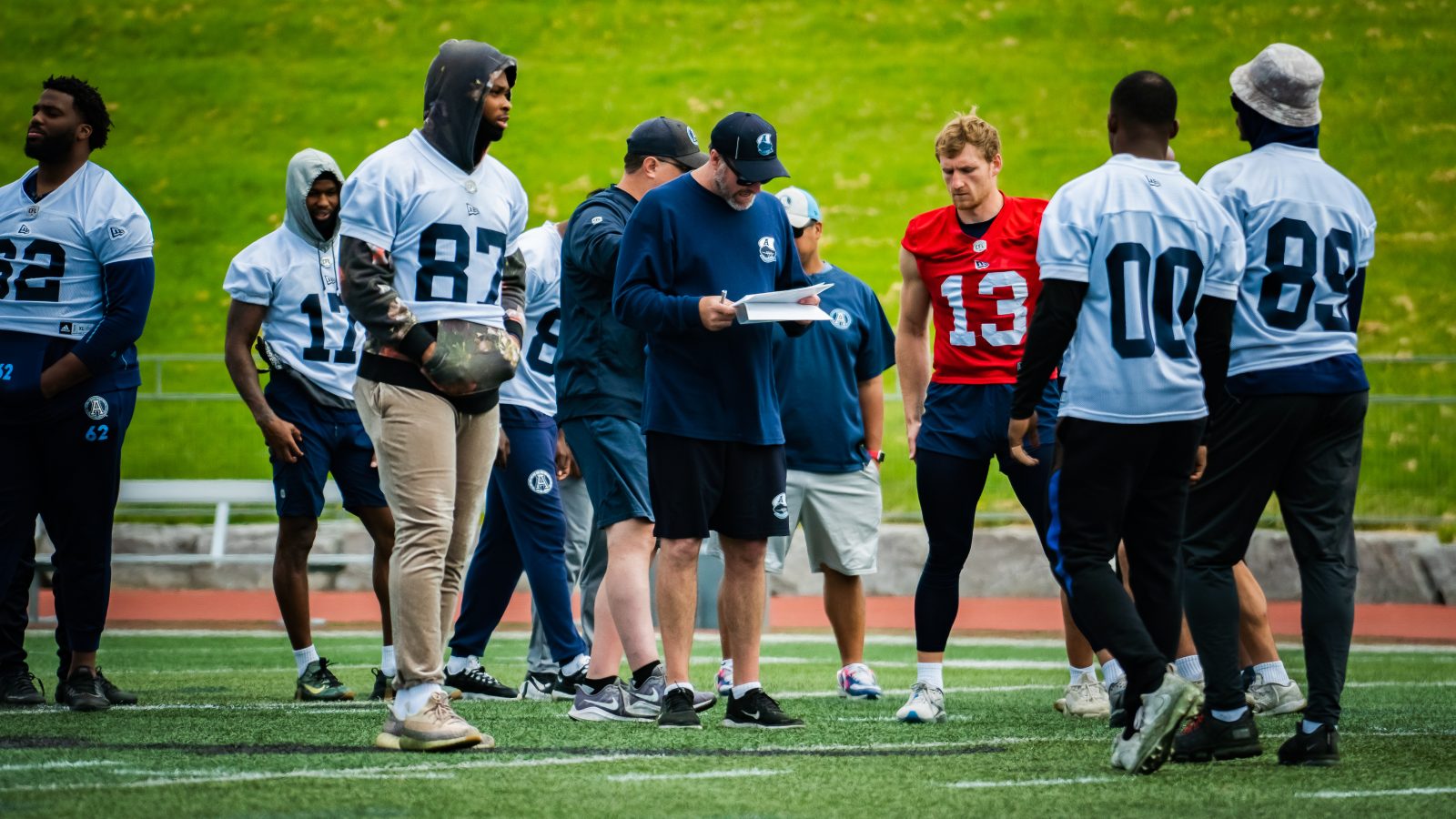 Players have been physically beating on their teammates every day for over two weeks. Coaches have been essentially living at the pavilion at Alumni Stadium; a great facility, but still not home. Personnel department members have been watching hour upon hour of video, watching multiple angles of each play at practice, noting who looked good on a play and who didn’t.

The support staff has worked incredibly long hours each day to make sure the oversized roster is ready to go to work the next day.

The routine may have become a grind, but it’s been a vitally important part of the evaluation process. For Head Coach Ryan Dinwiddie, his biggest worry heading into camp has been alleviated.

“We came out of it, for the most part, healthy,” he told Argonauts.ca. “There were no serious injuries, we had a few last year, so that was a concern going in. The five days off with the strike kind of set us back and put some of these guys in tough spots. We had some good competition; we had some veterans who came in and solidified their spots and we had some rookies chasing some veterans.”

Training camp is a chance for the front office and coaching staff to see players that they’ve only seen on film or coached against. Dinwiddie was asked if there were many pleasant surprises and the coach didn’t talk big picture first, he mentioned one specific player.

“Speedy (receiver Brandon Banks, a.k.a. ‘Speedy B’), I always knew he was a good football player. He’s still got the juice, he’s still got that second level speed, but I didn’t know how intelligent he was as a football player; in picking up the system, in things he’s said in the room as far as adding some teaching points from his point of view. I think he adds a lot of that element to the room. He’s a dialed-in guy, you can tell he’s focused and wants to do well and prove himself again.”

Corey Mace is new to the Argos this year, taking over as the defensive coordinator. He was also curious to see some of the players he had never coached, and he likes what he’s seen.

“That’s the beauty of camp,” he said. “You watch some of these guys from a distance; on film with the personnel department and you gauge an idea of what they might be. Then you get pleasantly surprised by some people who maybe fit your system better than the system they were in; we’ve certainly had a few of those. Then there are guys on the roster you expected to be animals and they certainly confirmed that.”

Also new to the Argos this season is Special Teams Coordinator Mickey Donovan. He said it’s been a competitive camp and they were able to see what they wanted to see out of the players.

He added that some positions have been more open than others, with the battle to become the returner being one of the more hotly contested.

“We started with seven or eight returners and now we’re down to four,” said Donovan. “They all have special skills; it’s about being able to field the punt, get vertical when you need to, or get to the outside when the blocks are there for them.”

Donovan says that’s not the case this year with the Argos.

“Everyone is pretty much on the same page with this, it’s going to be what’s best for the team.” explained Donovan. “To say something is one thing, to be heard is another thing, but everyone agreeing on a guy to take that spot and be that role player for the team; everyone is looking for that special someone.”

It’s now up to the combination of staff and front office to whittle down the roster, with the next round of cuts expected to be announced Saturday, or perhaps early Sunday.

General Manager Michael “Pinball” Clemons and his staff have five-to-ten tough decisions to make in the next few hours.

“Once we got going it was great to see the guys go out there and compete. We saw a high level of competitiveness and talent. It’s been a great camp.”

For guys like Magri, scouting a player is based on film study and conversations with coaches. That doesn’t mean what they’ve seen will translate to success on the field, especially for Americans experiencing new rules and a bigger field for the first time.

“There were a handful of guys that kind of surprised us,” said Magri. “We just had some close to final roster meetings and there were definitely some guys that have taken to the CFL well so far, both in practice and in the first pre-season game. We’re looking forward to seeing what they can do (Friday) night.”

For the starters – who are expected to play at least one to two quarters, it’s a chance to perform at full speed against a hated rival. For others, it’s a chance to make or break their future with the team. For those players, the final pre-season game means nothing in the standings, but potentially everything to their career.

A tip of the hat to everyone who made training camp an enjoyable experience, despite the daily grind. Gryphons Head Coach Ryan Sheahan and his staff were gracious to cede their workspace for such an extended period…Friday’s game against Hamilton will not be shown on TSN this week, nor will it be aired on TSN 1050 radio. Instead, the game will be live streamed at argonauts.ca/livestream beginning at 7:30, or perhaps shortly before that. Check the Argo accounts on social media for any further broadcast information. Natey Adjei is back for his second season as colour commentator, while your humble typist is back for a 17th season doing play-by-play. There’s also a rumour going around that the two of us might be involved in a podcast this season. To make sure you don’t miss any news on that front follow @TorontoArgos @Tey11_ or @MikeHoganArgos or better yet, follow all three…Argonauts.ca hopes you enjoyed this series and looks forward to you joining us at BMO Field this year, starting with the season opener Thursday, June 16, when the Montreal Alouettes are in town for an important early-season divisional game.