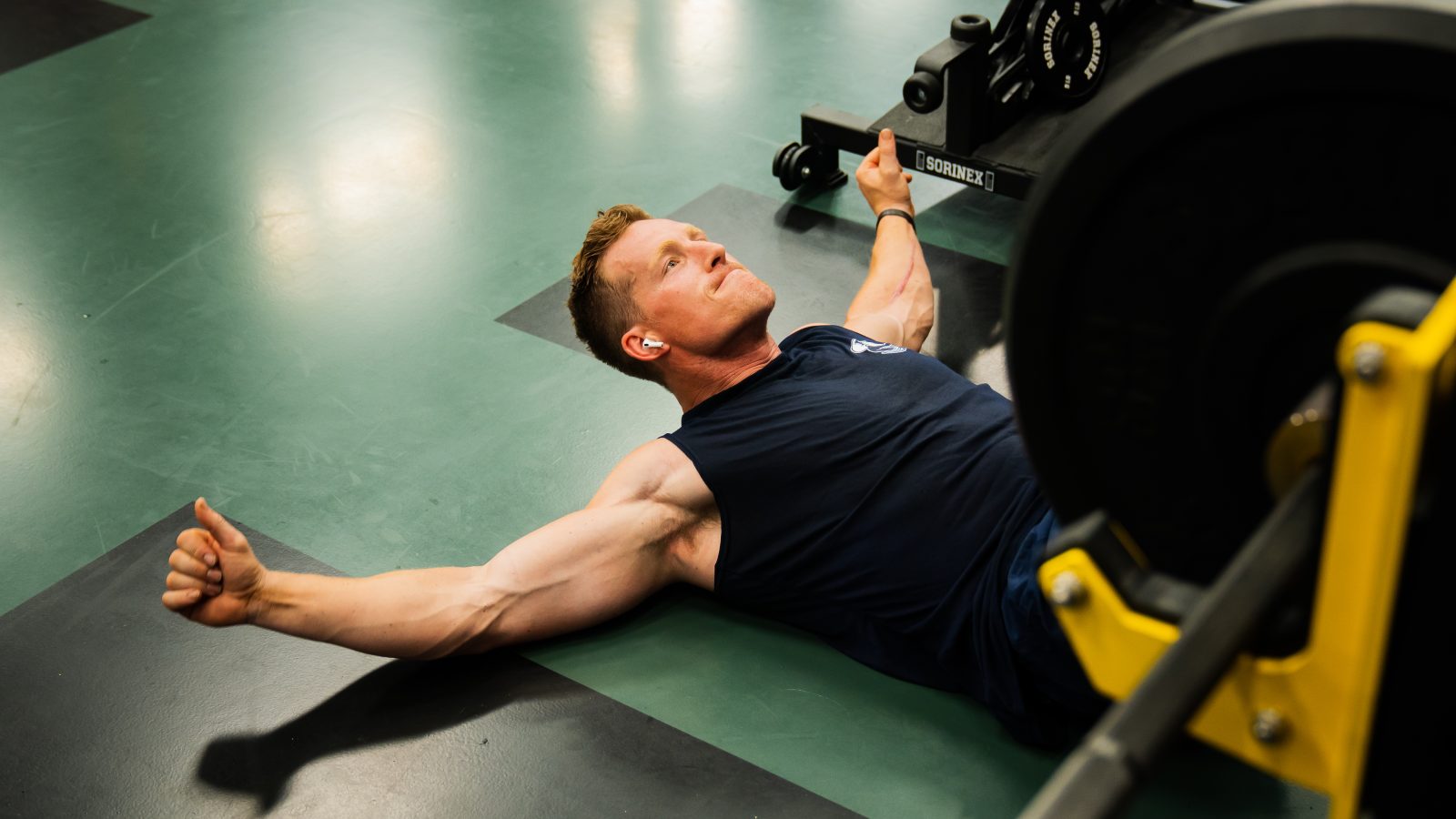 It has been said before of the long snapper for the Toronto Argonauts, “Jake Reinhart has never had a bad day in his life.”

While that accurately describes the incredibly positive attitude Reinhart displays on a daily basis, the description isn’t 100-percent correct; he had one really, really bad day.

“October 6,” he said of a game against Ottawa in 2021 that almost changed his life forever. “It was a punt to the left boundary, heading northbound at BMO Field (big laugh). I was running downfield to make a tackle on the returner. My hand got caught up on the returner and a teammate blew right through my arm. The elbow bent the way it shouldn’t and I knew right away; instant pain and I couldn’t move my arm.”

Reinhart is an old-school, tough football player. He’s the type that would get hurt, then jump up and run to the sidelines to get treatment. When he stayed down on the field that day, turning an ashen colour, everyone knew this was not a good situation.

“I was in shock and in such pain, I remember that the most,” he recalled to Argonauts.ca. “It was so freaking painful.”

It turned out to worse than a simple break or dislocation – much worse.

“My elbow was dislocated. It was fractured and many ligaments and tendons were torn. Being that there was so much trauma to the elbow it led to other injuries as well. My forearm was the main concern; the injuries led to compartment syndrome. My forearm was so swollen that there was no blood reaching my fingers, reaching my hand and all the nerves running to my hand were getting pinched off. I was completely losing feeling in my hand; l couldn’t move my hand. The doctors were telling me it’s one of the most painful things you can go through.”

This is going to sound a little strange after that incredibly vivid description but believe it or not Reinhart was actually lucky that night. He was lucky his wife Julie is a nurse.

“Initially the doctors could not tell that there was the compartment syndrome issue. They knew that the elbow was severely damaged and said, ‘Take it easy, we’ll give you some pain killers, go home and rest.’ I got back to Guelph (his hometown and where the Reinharts still call home) and my wife said ‘No, no, no. There is something seriously wrong. You’re not acting right, your arm is so messed up, it’s very hot and swollen. We have to go to the emergency department.’ As soon as we got in there, the ER doctor (Dr. Steven Hoey) right away said ‘This is a medical emergency, you’re about to lose your arm if we don’t operate right now.’”

Reinhart recalled that within about 10 minutes he was put under anesthesia and the surgery took place. It’s a good thing too.

“She saved me. I was going to go home and take some painkillers and go to bed. They said if it was any longer – and they did remove dead muscle tissue from my arm, it was getting no oxygenated blood – they probably would have had to amputate my arm.”

The story is remarkable.

For three months he focused on trying to increase his range of motion, with the first month being incredibly painful. He got back into the gym in the fourth month.

Aside from being married to a nurse, Reinhart got lucky from a football perspective as the injury was to his left elbow; he snaps with his right arm, though he needs the left arm to help direct the ball. He was able to long snap again in late April and somewhat astonishingly, he was snapping as well as he was pre-injury.

Everyone is thrilled that Reinhart is healthy again, but professionally speaking nobody is happier than kicker Boris Bede. In the first game after his special team partner’s injury, Bede recognized his friend when immediately after kicking a 51-yard, game-winning field goal on the last play of a game in Hamilton, he lifted up his kicking block and on the bottom was a 58, Reinhart’s number.

“He’s a beauty,” the kicker said of the long snapper. “I’ve met a lot of people throughout my life and he’s in my top three of being the nicest person with just pure heart.”

Bede says their relationship is strong both personally and professionally. On the field he appreciates the fact that Reinhart is outstanding at what he does. The laces on the football are in the same place virtually every time the punter or holder gets the snap, taking the guess work out of the play.

That’s not why Bede is the happiest about his friend’s return.

“Ever since I’ve met him, he’s made me a better person. I tend to get angry a lot and he finds a way to turn it into a positive way. He’s always positive and he makes the worst situation the best situation and a bad day a positive day. I really enjoy this guy.”

Bede gushes about how good Reinhart is at his job, but even more so about who he is as a person. That’s the feeling of everyone in the Argo family, though nobody appreciates his return more than Reinhart himself.

“Sometimes I just reflect and appreciate how grateful I am just to have a healthy body. I had COVID and for three days I felt sick, and I am just so appreciative of feeling good now. You go outside and run around in the fresh air and your body operates fine, you don’t really think abut how nice it is for your body to operate like that. But having no arm for three months and knowing how close I was to know having an arm? How nice is it to have two functioning arms? I’m grateful for it.”

Thankfully Jake Reinhart is back to his former self; happy, positive and not having any bad days.

The team spent most of Wednesday’s practice preparing for Hamilton. They did run some “Skelly,” going full speed without an offensive or defensive line…The biggest event of the day happened mid-practice when Alumni Stadium in Guelph was hit by a downpour. It led to some dropped balls and a couple of errant passes…The last play of training camp, aside from Thursday’s walkthrough, was a dynamite catch by Cam Phillips. He won a jump ball against a defender along the sideline, then somehow got a foot down before falling out of bounds. At that point Head Coach Ryan Dinwiddie ended practice a few plays early, because it was such a great way to end camp…A quick note, Friday’s 7:30 game against the Ticats at Guelph will not be heard on TSN 1050. Please check the Argos social media accounts for news about broadcast details. An announcement will be made when details are finalized.