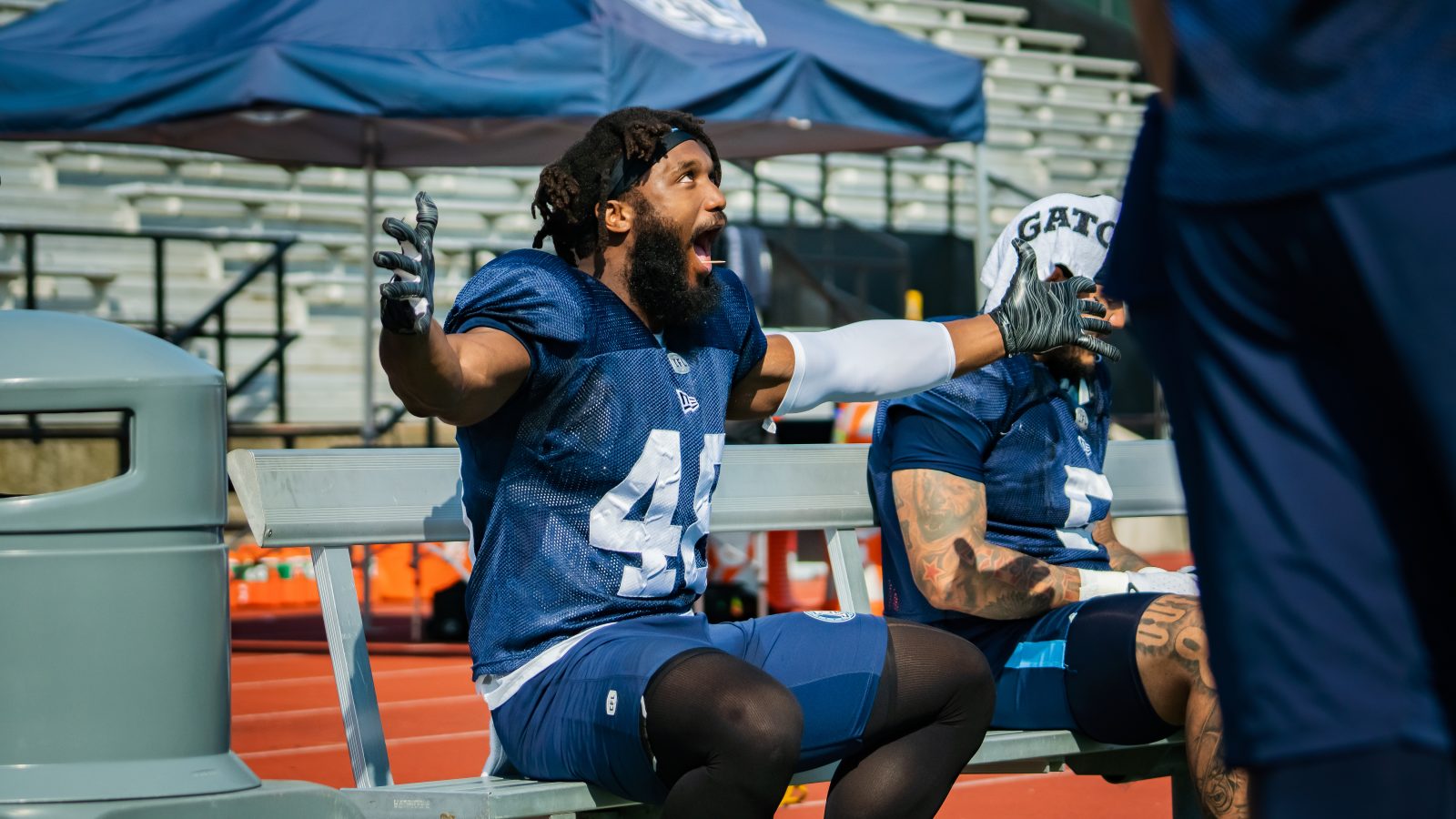 It was a line of questioning that Toronto Argonauts Defensive Coordinator Corey Mace wasn’t prepared for but was happy to answer.

Coach, are you a big fan of candy or chocolate?

“At my size I will eat candy, no doubt.”

Argonauts.ca continued its unique style of hard-hitting investigative journalism by asking him to list his favourite sweets.

“I think it goes in waves,” he explained. “Growing up I was a big Mr. Big fan, then I got into the Twix world, currently I think I’m transitioning out of Peanut Butter Cups, that was a good ten-year phase. I’m leaning on Snickers right now.”

The coach made no mention of M&Ms, though one could assume he’s going to think his new linebacking tandem will be pretty sweet.

The M&Ms; Muamba and McManis, will patrol the second level of the Argo defence this year. Henoc Muamba will be the middle linebacker, while Wynton McManis will play the weak side.

Both players were grilled about their favourite M&M flavour and both opted for peanut. Their similarity in candy preference is not the only thing they have in common.

“Wynton is a smart player,” Muamba said of McManis, while McManis said “His knowledge of the game, his instincts,” was what impressed him the most about Muamba.

Now, these two tremendously skilled, highly intelligent, natural leaders will play next to one another for the Argos; members of a mutual admiration society.

“He sees the plays before they come,” McManis told Argonauts.ca. “He can call out the offense’s plays before they even run it. If you open up your ears and listen to him and believe him, he’ll say, ‘They’re going power right here,’ and boom, lo and behold the guard pulls, it’s power right here. His knowledge and feel for the game are great with that veteran instinct he has.”

Muamba feels the same way about his new on-field bestie.

“He understands the defense,” he said. “He’s one of the most complete WILL (weak side) linebackers I’ve played with. Nothing against anybody I’ve played with before, but he’s smart, he’s got all the attributes you want in a WILL linebacker; he’s rangy, he can move, he can cover, but the biggest thing I like about him is he’s smart, he communicates. We’ve already got some good chemistry together.”

The almost instant chemistry between the pair is obvious and makes the Argos a potential force at the defensive second level. Muamba loves the fact that McManis talks on the field as much as he does.

“This game, a lot of people don’t realize how much it depends on communication, especially being on the defence. I’ve played with some WILL linebackers in the past who have been quiet, and I had to do all the talking. (McManis) and I have a great chemistry going already and we tell each other all the time ‘Keep talking and I’ll talk back to you.’”

Perhaps the most surprising thing about that statement is that McManis is constantly talking. That’s tough to do when you always have a toothpick in your mouth. That’s not an exaggeration, the Memphis, Tennessee native always has a toothpick in his mouth; in meetings, in the locker room, during meals – always.

And yes, he invariably has a toothpick in his mouth while he plays a collision sport. Isn’t he worried that at some point someone will hit him, and he could swallow it during a practice or game?

“I do the hitting,” he said, grinning while, of course, sporting the toothpick.

How about his fellow M&M member?

“That’s not going to happen,” Muamba said, beginning his answer before the question was finished. “I’m going to leave the toothpick to him. He worked out with it in the off-season, we’d run and that’s when he told me that’s what he does all the time. I’ll let him do what he does and if it helps him get fumbles picks and interceptions, I’m not going to stop him.”

Muamba and McManis looks like a match made in football heaven. Their contributions to the team – both tangible and intangible – could go a long way in helping this defence become one of the strongest in the league.

Monday’s session would likely be considered a split decision; the offence winning early on, the defence rebounding with a strong closing performance…McLeod Bethel-Thompson was particularly crisp in the early session. He and A.J. Richardson connected on a deep ball down the right sideline. Richardson did a great job, keeping a foot in bounds, and securing the ball as he fell to the ground. He had a tremendous day among the receivers…With no tackling in camp, defensive players will try to punch out the ball when they get close to a receiver or running back. Eli Mencer received a huge cheer from his defensive teammates when he did the next to impossible. Mencer chased down A.J. Oullette and not only punched the ball, but knocked over the 5’9”, 210-pound human bowling ball. To his credit, Oullette hung on to the football…It happens virtually every year, but this was the first day things got a bit chippy on the field. While there were no fights, there was some pushing and shoving and a lot of talking. Bethel-Thompson and offensive lineman Philip Blake made passionate speeches to nip things in the bud, both alluding to the fact that almost two weeks into camp the players are sick of hitting each other. They’ll have the chance to hit someone else on Friday night when the Hamilton Tiger-Cats head up Highway 6 for a game at Alumni Stadium at the University of Guelph. Kickoff time is 7:30. For tickets visit Argonauts.ca.